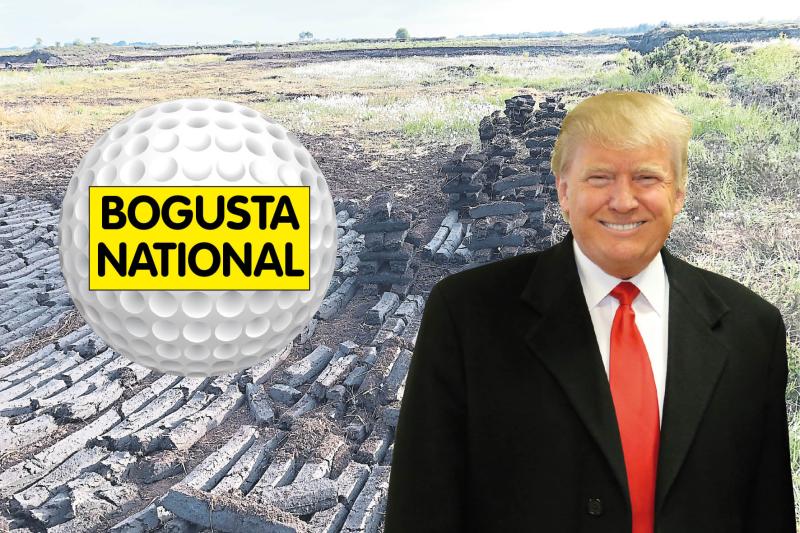 The Offaly Express has learned that Donald Trump is set to buy a decommissioned bog in Offaly with the intention of building a new golf course.

The land between Kilcormac and Cadamstown has become available now that Bord na Mona has stopped harvesting peat and it could be in line to become a top golfing destination if the ambitious plans get the go ahead.

The former President owns a number of high profile golf courses, including at Doonbeg in Clare, Turnberry in Scotland and Doral in Florida but this new project could be the biggest project yet.

With time on his hands now that he is no longer President, and as he is still banned from Twitter, it is thought that Trump could move to Ireland to oversee the project from start to finish.

And the Offaly Express can exclusively reveal that course is going to be called Bogusta National Golf Course.

It is hoped that once the course is open, a new tournament called the Irish Masters will be started within two years. It will be like the actual Masters but instead of a Green Jacket, the winner will be presented with a hi-vis vest with Bord na Mona on the back.

According to a spokesperson for the former President, it will be the 'biggest and best bog based golf course in the world'. The spokesperson said that the course would 'Make Offaly Great Again' and a range of 'MOGA' hats would be on sale. It is understood that these hats are already in stock as one batch of 'MAGA' hats from China had a spelling mistake.

The new golf course will have some unique features.

Instead of bunkers, existing bog holes will be drained and instead of greens, briquettes will fitted together like paving to create a putting surface. Wet turf mold will be used to stick the briquettes together.

Controversially, there is a plan to build a wall all the way around the site which, according to the spokesperson, Mexico will pay for.

The clubhouse will be sympathetic to the surrounding area and will be made up of a few prefabs and containers Bord na Mona now have going cheap.

Instead of golf buggies, tractors and quads will be used to get around the course.

There will also be some strict conditions when it comes to membership.

All members will be required to foot turf at least two evenings a week during the summer as this will be used to heat the clubhouse during the winter.

Footwear is restricted to hob-nail boots and anyone seen consuming anything other than luke-warm tea and soggy ham sandwiches will have their membership revoked.

The owners will also accept no responsibility for injuries caused when people get sun burned or get eaten alive by midges.