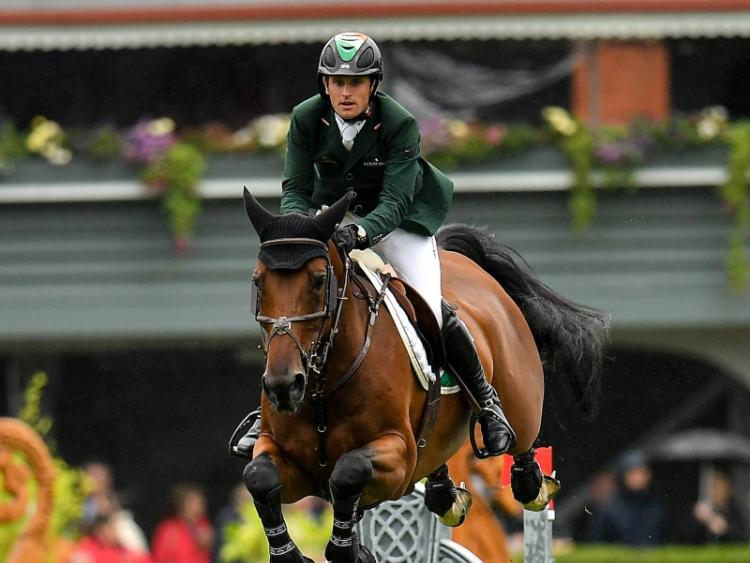 It was his second win of the week as he rode Great-Tikila J to capture the $137,000 Horseware Ireland three-star Grand Prix. Only ten of the 45 starters made it into the jump-off where Kenny piloted his 10-year-old mare to a clear in 35.24 seconds for the victory.

Darragh is currently ranked at number nine in the World Rankings.

“I actually got very lucky in the jump-off, to be honest,” said the Offaly native. “I had planned to do the six [strides] like everybody did in the first line, then turned very tight back to the double, and she tried really hard. I had a hard rub on the back rail jumping out but got away with it, then I ended up doing six where Hilary had done five, so I thought, ‘Okay better run.’”

Kenny and his sponsors purchased the mare just over a year ago, and the win was even sweeter as it was also the first Grand Prix of her career.

“When we bought her, she was very green having only jumped 1.30m, but she’s extremely talented,” he said. “She’s careful, scopey, brave, a little bit of a mare sometimes, but in the ring her ability is incredible. I was really happy with her because I aimed her for this week. She jumped clear in the WEF and then jumped super today and felt really good.

“We’ve developed her slowly,” Kenny continued. “She’s a little bit temperamental sometimes where you have to take everything slow, so I played around with her on the grass a few other weeks, did some stuff at home, and then thought, ‘Okay, I have her in the right spot for this week.’”