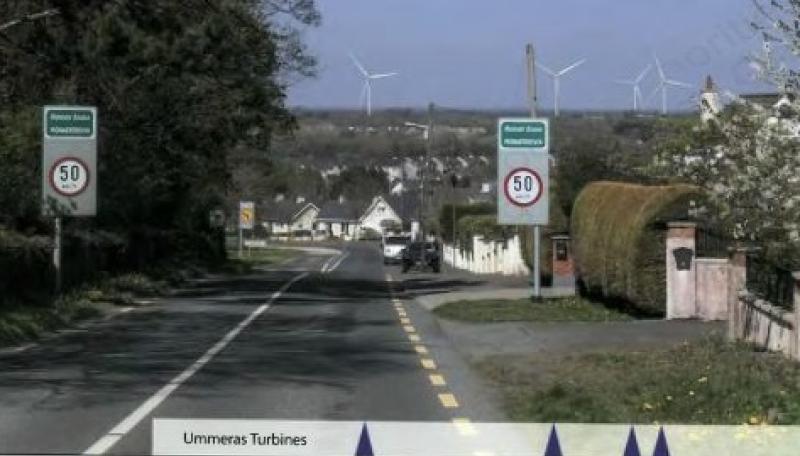 A photo montage of what the turbines would look like

A controversial wind farm proposed near Monasterevin close to the Laois, Offaly and Kildare borders has been refused permission.

Kildare County Council refused the application due to air corp flight path, ecological and road network concerns. The planned development is located around 5km from the village of Bracknagh in Offaly and corresponding planning permission was being sought for road widening works in the village to facilitate the delivery of turbine parts.

Over 170 submissions were made by local residents, politicians, Kildare Failte, the Irish Peatland Conservation Council and the Irish Aviation Authority on the application for the wind farm itself which would have been on the Kildare side of the border.

Residents raised concerns about the possible impact the facility would have on the Ballykelly distillery project, the €5m investment in the Blueway Grand Canal cycle and walkways, and €100,000 earmarked for design proposals of the Umeras Peatland Park.

The Monasterevin and Rathangan Wind Awareness group said; “you couldn’t pick a worse location for turbines in Ireland if you tried — in the middle of a new tourism hub with over 60 million being invested by the county councils of Kildare, Laois and Offaly on Blueways and Bono on Ballykelly Mills Distilleries and the Just Transition Fund and Kildare Leader on Umeras Peatlands Park.”

It believes this project won’t create any permanent local jobs and will damage tourism which can bring the streets of Monasterevin and Rathangan back to life with cafes, restaurants, pubs, bike and kayak hire, B&Bs, AirB&Bs, hotels, and many other spin-off opportunities.”

The group also contends the proposal contravenes the Kildare County Development Plan because turbines are not permitted at the Grand Canal protected scenic route and Umeras Bridge scenic view.

Kildare Failte also lodged an objection and said the proposed development is inappropriate for this new tourism hub and it recommended it be refused.

The Irish Peatland Conservation Council raised concerns about the possible impact on wildlife, while the Irish Aviation Authority recommended the developers engage with Clonbullogue airport to ensure there is no adverse impact on their activities.

In response, a Statkraft company spokesperson previously stated that while the planning application is before Kildare County Council, it cannot comment on its specifics.

However, it did say Statkraft doesn’t have any plans to extend the Ummeras wind farm, if successful in its application.

“The company has consulted and is continuing to consult extensively with all those living in the vicinity of the proposed Ummeras wind farm. This intensive programme of work began in March 2020 and while disrupted due to Covid restrictions, an online virtual consultation platform has recently gone live,” he says.

“This virtual platform along with a host of accurate project information can be accessed on www.ummeraswindfarm.ie.”

The company says all 180 households living within 1.7km of the five proposed sites have been either visited or had information posted to them — since calling door-to-door was rendered impossible due to Covid. It says ideas have been sought on the use of a community benefit fund which would be worth in excess of €150,000 a year to the area.

Among proposals put forward by locals are improvements to broadband, development of an energy efficiency scheme, support for a men’s shed and a local community garden initiative. Statkraft says it also supported a ‘Meals on Wheels’ initiative in the immediate area during the early days of the pandemic.

It stressed Statkraft is eager to engage with locals, develop meaningful relationships with communities and is an experienced, professional developer of renewable energy with an excellent track record.