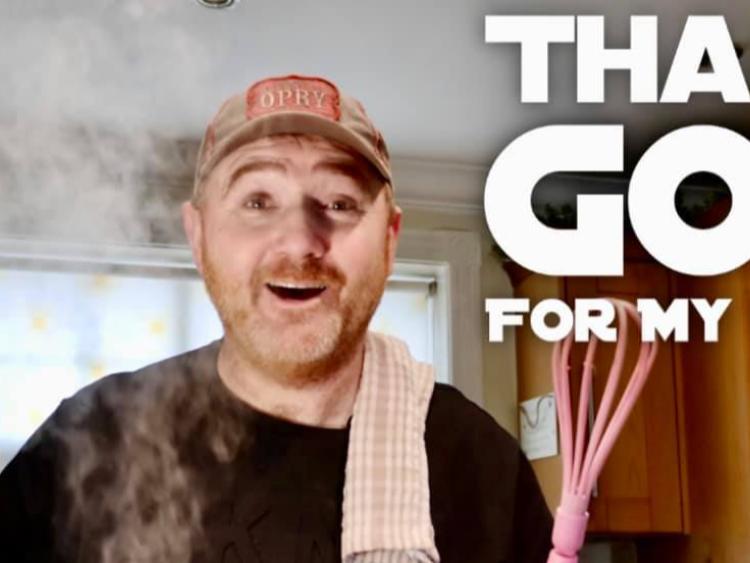 The brand new single from Ballycumber's Stephen Rosney shows that the singer/songwriter knows who the boss is, and proves that he wouldn't want it any other way.

Thank God For My Wife, is the latest original from the midlands man, and in keeping with every release in the Rosney songbook, it's a tune that will have fans humming along from the very first listen.

"It would be near impossible for anyone to have a career or any kind of a life in the music business," declared Stephen, "without the support of a very understanding partner at your side.

"I've said that before, many's the time, and it's something that I'll always stand by, too. This single is just an acknowledgement of that fact. If it wasn't for my wife Helen, then it's fair to say that anything I've done or achieved with either Roslyn or the Back Axles, or as a solo artist, just wouldn't have been possible."

That sense of love and gratitude is evident from early on in the song where Stephen sings, "She's my life, my everything."

However, as fans of the Offaly man's work will know, one of the hallmarks of a Rosney composition is a sense of humour. And it's very much a case of tongue-in-cheek playfulness mixed with heartfelt sincerity in Thank God For My Wife too, as listeners will hear in lines like, "Tear down that wall, move that chest down the hall/Put that guitar in the bin."

But all of that is simply a situation where art is reflecting life as it's lived in the Rosney household.

"I'd have a tendency to live with my tongue-in-cheek most of the time anyway! [Laughs]. And Helen is that way inclined as well, which is obviously a good thing. That shared sense of humour has been one of the strengths in our relationship since the day we met.

"And I think it's a factor that plays one of the most important roles in any relationship. Most of what I sing in this song has probably happened in some shape or another, I might just have changed a few details to protect the guilty. But like that line about the guitar, I'd always know that Helen never actually means that, and she'd always know that I understand what it really means is I'd better put it away for a while if I want any dinner."

Indeed, the strength of Stephen and Helen's bond was demonstrated by the fact that they ventured into the recording studio last year to duet on a track called Something We Can Work On, a co-write between Stephen and Lusmagh lyricist and poet Anthony Sullivan.

Also last year, Stephen released a powerful tribute to the late John Prine, one of those who have sadly been taken from this world too soon as a result of Covid 19. That song, Still Around Somehow, written by Joe Kelly and Paul McNeilly, also featured the talents of some of Nashville's top players. Bob Miner, who spent twenty-seven years with Tim McGraw, played acoustic guitar, while David Roe Rorick, who played with Johnny Cash, was on upright bass. Aaron Till, who played fiddle and mandolin, has also played with Pam Tillis, Mark Chesnutt and Asleep At The Wheel. The song's producer, Mike Scott, took on banjo, with the multi-instrumentalist and singer/songwriter Carl Jackson, who played with Glen Campbell for twelve years, joined Stephen on vocals.

~ THANK GOD FOR MY WIFE, the brand NEW single from STEPHEN ROSNEY, is OUT NOW, available on all platforms and to request from radio.