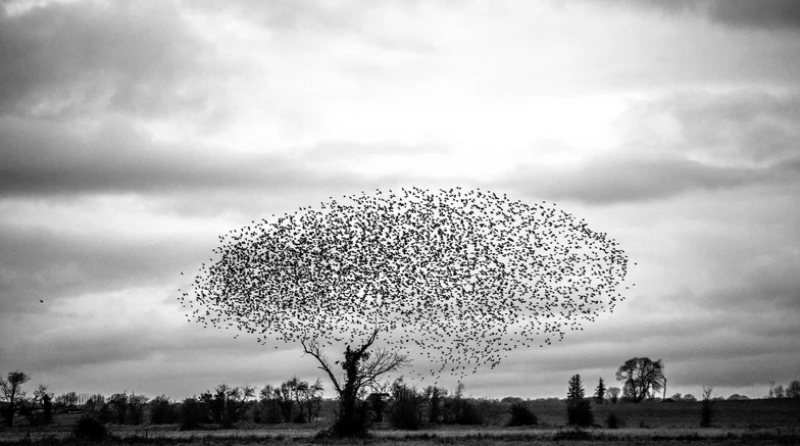 The final 12 photographs have been chosen in the RTÉ and the National Botanic Gardens of Ireland’s Eye on Nature wildlife photographic competition.

RTÉ's Mooney Goes Wild and The Today Show launched the competition in January this year, to celebrate the flora and fauna of our island and it received an overwhelming response, with more than 7,000 entries.

Offaly photographer James Crombie is featured on the shortlist for his amazing snap of a starling murmuration at Lough Ennell.

The judging panel, consisting of Matthew Jebb (National Botanic Gardens), Niall Hatch (BirdWatch Ireland) and Sheena Jolley (acclaimed wildlife photographer), shortlisted the final 12 photographs, and the ultimate winner will be announced on The Today Show this St Patrick’s Day on RTÉ One from 1pm.

Derek Mooney will present the photographer with the inaugural trophy and a prize of €1,000. In the coming months, the exhibition will travel to other Office of Public Works sites across the country.

Derek Mooney said: "I knew that Irish people loved wildlife, but who would have thought that we were a nation of wildlife photographers too? We received pictures from almost every county in Ireland. I'm touched by the response. For many, this competition was a way for them to express their relationship with nature. For others it was a re-connection, and for some it was an awakening, to the wonderful world of nature on our doorstep. There were in excess of 7,000 entries, and it's fair to say that almost every member of the animal kingdom living on, flying over or swimming around Ireland is represented."

You can view all of the shortlisted photographs here.