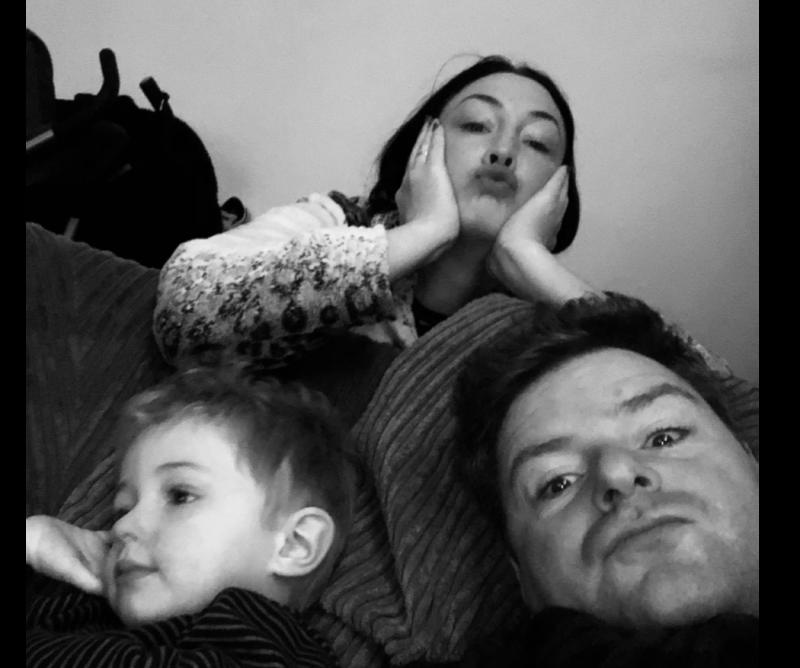 Damian Farrell with his wife Jessica and son Shea

IN this week's “ People of Killeigh and Beyond” series musician Damian Farrell recalls his youth in the village and how it inspired his career in music.

“Probably my first or earliest memory of Killeigh was my first day of school, where the GAA dressing rooms are now, Mrs Stapleton's class, and looking around, as a child of four. I was immediately met with noises of screaming with some unhappy faces and some simply weren't that bothered to be in school, or comprehend what was going on.

A line of mothers just wistfully watching, I suppose if it were today, it would be a facebook post marque type of moment, or maybe just the pure delight of getting some rest.

My mother was Pauline Byrne from Clontarf Road, Tullamore, and my father, Jimmy Farrell was from Springfield in Cappincur, (Out near Daingean Road)

They met at a Carnival, where the old Dunnes Stores car park is now on Church Road.

From legend, it wasn't love at first sight, it was more like a scene out of the movie “Grease”, and my father was like one of those greasy T-birds chaps as you could image, just general harassment on my poor mother. He begged and she eventually caved in, and they started courting, got married two years later at the Church of Assumption in Tullamore in August 1966.
I have two brothers, Alan and Just and one sister, Sylvia, and then finally with a six year gap, I popped out and upset everyone. We all lived at Number 8 Hillview Crescent, a stone’s throw from the centre of the village.

There were 22 houses in all eventually in Hillview Crescent and it is was a brilliant place for a kid to ramble about. A lot of the houses if not all, had young families, and all had decent age groups to pal around and play.

The adventures in the surrounding fields were the stuff of legends, we would get lost for hours pretending to be James Bond, or some lovable cowboy.

I am still friends with a lot of them today, probably the best of friends.

My father was known locally to be a skilled carpenter, and looking back at him and his crafted works, some are still visible and hanging on the wall in the local pub in Killeigh to this day.

He was a bit of a creative maverick, nearly everyone in locally had a dolls house made by my father, or something else like a toy truck or a dolls cot.

The lead up to Christmas, most families would have the smell of pine or candles maybe, but for our household we had a constant smell of varnish for about five weeks consecutively. High on fumes, high on life, but they were extremely happy times, when we were all one family together under one roof.

Probably the first real acknowledgement of the community spirit of Killeigh village was that the locals really responded with encouragement, and support for my father's toy creations. I had noticed very early on that someone would call to the house, and pick up their toy.

Killeigh really did get behind that sort of community backing, an endorsement if you like of what happened more recently with a young man from Killeigh, who was on the Late Late Toy show for his wood creations, my father would have applauded him.

It's the exact same community encouragement that my father received and now this young man has the same backing for being inventive, innovative and giving people some happiness in the process.

I always found that to be the case that if you have a passion, a drive or simply evoke an interest that's positive and with the sporting teams also, you'll be backed in Killeigh 100%

With me eventually getting involved with music, it was the same encouragement.

Little by little I gathered my own momentum and with a lot of help along the way and it started with getting involved at a youth club which took place on Thursday nights in the Macra Hall.

We were privileged to have the Youth Club in my teens, and so many activities that took place there.

Before Youth Club, the Macra Hall was the focal point for the community, whether it be discos or GAA awards, Art Competitions, Auctions, and loads of other stuff, I remember I seen a circus there also, and E.T (who was massive at the time) literally came out of nowhere and shook every child's hand in the hall that day, complete madness but memories that last a lifetime.

I played my first ever music live performance in the Macra Hall on January 24, 1997, as a youth club band night, and felt invigorated by it and knew that I'd want this forever. It was organised by the youth club, and it was videotaped also, who has the tape is still a mystery.

The very first time I held a microphone was in the youth club on a music night - open mike jam session. No one would get up to sing, so I eventually did pluck up some courage and started to sing while other lads were playing guitars, and It felt really like the electrics just turned on in my head

I had been the only one who got up first, and everyone was watching with interest, some with sneery heads on, but I just didn't care, I was on cloud nine.

I have always thought about this, music has taken me absolutely everywhere, it’s given me a lot of satisfaction and financially been pretty good. It placed me in wonderful situations I will never forget.

In 2011, I left Killeigh and moved to the Canary Islands to do a residency at various venues, and eventually met my now wife Jessica, and we have a beautiful baby boy called Shea and now reside in Sheffield in Yorkshire, where I continue to work in music and media.

But in thinking? What if I hadn't been involved at that youth club Jam night? Would I have pursued music further? Would I have had the opportunity elsewhere, probably not? Who knows? What if?

The point is, and this is the bottom line, we have the spirit, we have the enthusiasm and the community backing, unfortunately we don't have the centre or facilities, and that in this day and age for a village like Killeigh is very sad indeed.
I feel sorry for the kids that don't have what we had, like the youth club for example.

That is just one aspect, what about the commercial value for instance. Hosting auctions, food and craft fairs, and even an amateur dramatics or musical group in Killeigh, I mean I don’t think there has ever been one, but the opportunities are endless, and with imagination comes the planning. The aspiration becomes reality, and that's what is needed. Killeigh deserve a centre that they can be proud of, it's well past overdue.

The Hall has the best of cherished memories for me and has given me and lots of people extreme happiness down the years. I've laughed, and I have cried in that hall and both were equally as important to me in life.

I have a vision to visit Killeigh with the new Centre in place with my son, and show him what a wonderful place Killeigh has been for me. And to be proud.

Killeigh is always in my heart, it never left me…”

If you would like to learn more about the development of the proposed Killeigh Community Centre and how you may be able to assist please visit our website www.killeighcommunity centre.com