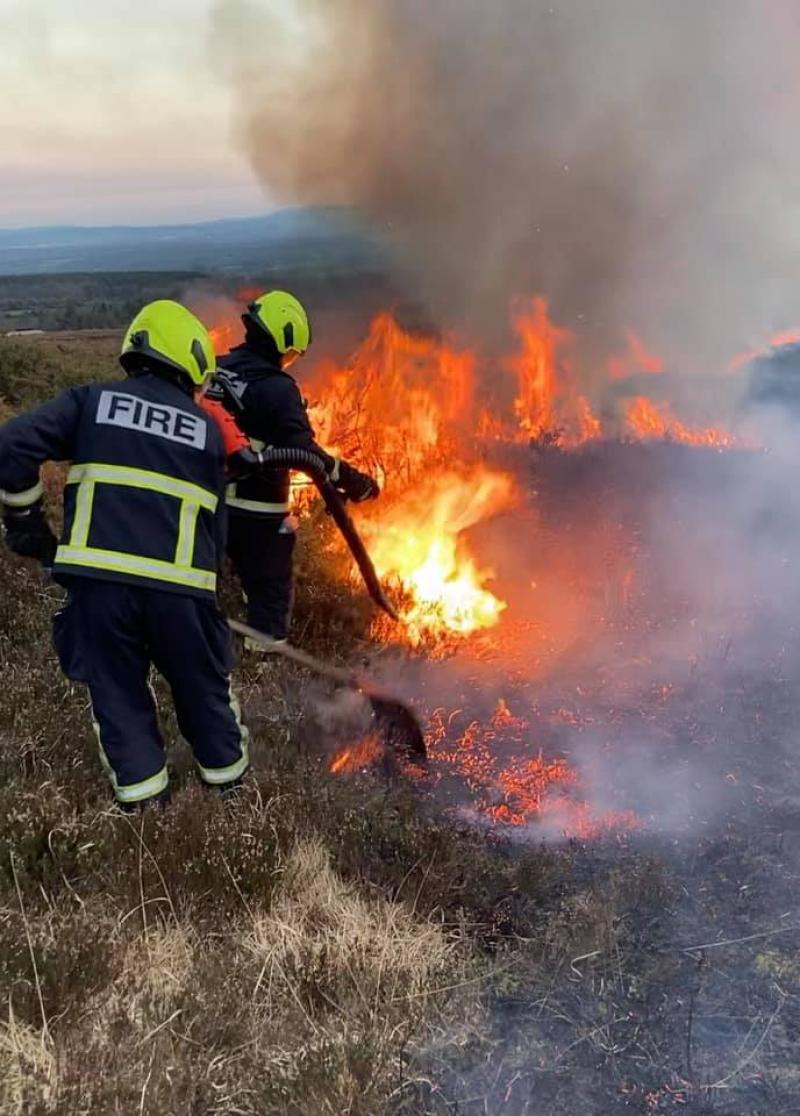 Both Ministers in charge of heritage in Ireland have condemned the lighting of illegal wildfires in the Slieve Blooms and in Wicklow Mountains national park last weekend.

The fire in Laois destroyed 200 hectares of native wildlife near Ballyfin and took 35 firefighters to put it out over 24 hours.

Minister for Housing, Local Government and Heritage Darragh O’Brien and Minister of State for Heritage and Electoral Reform Malcolm Noonan both spoke out against the deliberate lighting of the fires.

They say that the fires damaged protected habitats and species, put communities and private property at risk and placed an unnecessary additional burden on the emergency services.

Minister O’Brien said, “wildfires do not occur naturally in Ireland".

"The main cause of such conflagrations is thought to be the deliberate starting of fires without concern for the emergency services, the local wildlife, habitat, communities or even private property close by.”

Minister Noonan said that both fires have destroyed important upland habitat and displaced and potentially killed local wildlife at a critical time of year for many species.

"Both of these sites are Special Areas of Conservation and among the most precious places in Ireland for nature. Indeed, the Slieve Blooms SAC is home to a thriving population of hen harriers and other rare bird species, all nesting this time of year. Setting these fires is absolutely criminal and an all-too-frequent tragedy.”

“The setting of these fires is irresponsible and reckless and shows a disregard not only for nature, but also for people – the communities who live in these areas and have to breathe in the smoke, the individuals and families whose property is put at risk, and of course for our emergency services. In the midst of a pandemic it is incredible that our emergency services are put in a position whereby their resources are pulled in this direction,” Minister Noonan said.

Section 40 of the Wildlife Acts 1976, as amended, prohibits the cutting, grubbing, burning or destruction of vegetation, with certain strict exemptions, from 1 March to 31 August.

Minister Noonan said that a full investigation has begun.

“The National Parks and Wildlife Service in my Department will examine our own drone footage, drone footage from the Civil Defence and Copernicus satellite data to investigate and fully assess the damage caused by these fires. In the last week, NPWS has deployed increased fire patrols at our sites and remains in close liaison with both the Gardaí and the Fire Services. These patrols have targeted known fire high risk areas. Where appropriate, cross compliance is pursued with the Department of Agriculture, Food and the Marine. My staff are committed to finding solutions to these fires and I call on all stakeholders including the local communities to work with us to find a way forward.”

Minister O’Brien thanked the local fire services and all who helped to battle the fires.

“I would like to take this opportunity to express my deep appreciation for the Fire Service, National Parks and Wildlife Service staff and the Civil Defence who work tirelessly and selflessly to battle these fires year in and year out. It is incumbent on all of us as custodians of nature and the land to work together to find solutions to avoid this happening in the future. If anyone has any information about the fires in Wicklow or Laois, please contact your local NPWS office or the Gardaí.”