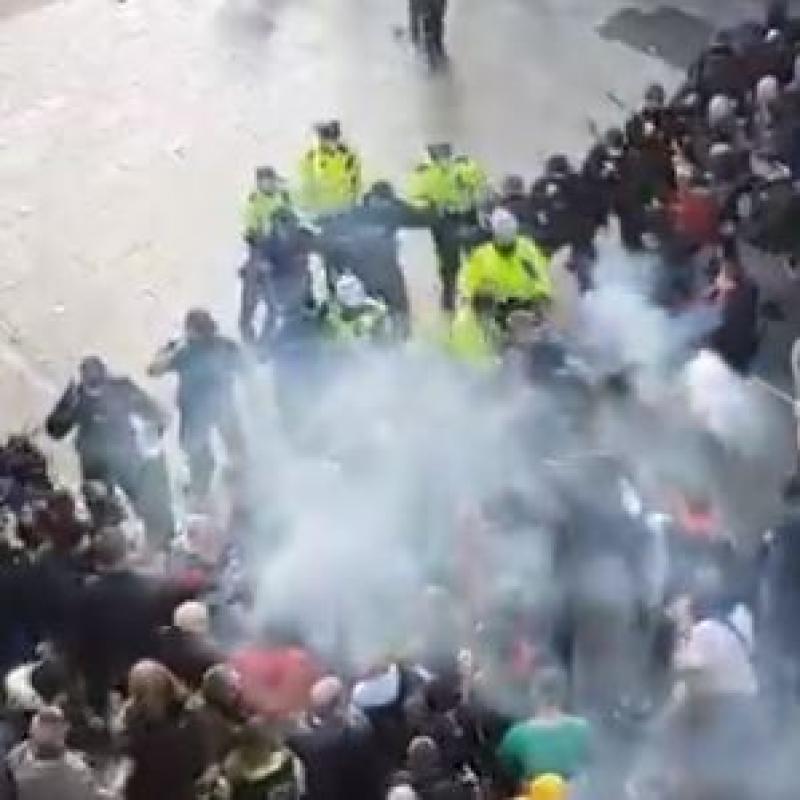 A man aged in his 30s has been arrested in connection with an alleged firework attack on gardaí at a violent protest in Dublin at the weekend.

Gardaí said the man was arrested this morning and is being detained under Section 30 of the Offences Against the State Act at Irishtown Garda Station.

He can be questioned for up to three days.

Gardaí had been searching for a man following an incident during the violent protests in the capital on Saturday during which a "rocket cannon" firework was fired in the direction of officers on Grafton Street.

The firework can shoot up to eight missiles.

The footage of the incident was widely shared on social media.

A Garda statement said: "A man his 30s was arrested this morning and is currently detained under Section 30 of the Offences Against the State Act, 1939 at Irishtown Garda Station.

"The investigation is ongoing."

A house in south Dublin was searched yesterday as part of a criminal investigation and items including fireworks were removed.

Fireworks are illegal under current legislation.

Gardaí had put in place a policing operation for the illegal gathering on Saturday.

Over 100 gardaí were on duty for the event and three were injured. A total of 23 people were arrested afterwards.

"Following continued and orchestrated non-compliance with Public Health Regulations and failing to comply with directions from An Garda Síochána, the gathering became violent on occasions with members of An Garda Síochána targeted with fireworks, missiles and spit.

"Gardaí were forced to intervene. 23 persons have been arrested under Public Order Legislation. Three Garda personnel were injured during the incident. One required hospital treatment for his injuries.

"The policing operation initially involved approximately 125 members of An Garda Síochána, Uniformed Personnel, Plain clothes, Public Order Units, Garda Mounted Unit and Garda Dog Unit.  During the course of the operation further resources were redeployed from across the DMR region in support.

Speaking this evening Commissioner Harris stated, "A major investigation is now underway to seek and bring to justice those that have committed offences today. Gardaí have also noted a number of individuals outside their home without a legitimate excuse.

"This was a protest that sits outside the normal behaviours of our society. These are not mainstream groups, the great majority of our society are compliant with the regulations and are living within these regulations in order to suppress COVID-19.

"An Garda Síochána responded in a professional manner today which resulted in calm returning to the city centre."