Which kicked off first in Offaly? Soccer or Gaelic? 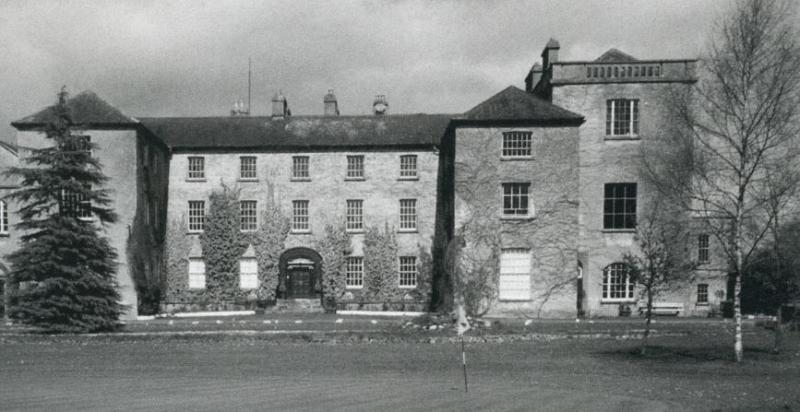 The Jesuit college in Rahan, home to one of Ireland's first 'association football' teams

IT might come as a shock to the GAA followers in the Faithful County, but research has established that Offaly was home to some of Ireland's earliest soccer teams.

Belfast-based historical scholar Martin Moore has established that 'association football' was taking hold in Rahan, Tullamore and Geashill as early as 1877.

“The traditional understanding is that soccer was consciously ‘introduced’ to Belfast in 1878, from where the game eventually spread around the rest of the island. The real story, however, is not quite so straightforward,” writes Moore.

“We now know that soccer was played in other parts of Ireland before 1878 and Offaly, Tipperary and Sligo were centres where the code was played in the late 1870s and early 1880s, though it failed to take root and was not sustained.

“As early as December 1877, three football matches were played in the Tullamore area, which were almost certainly either played under association rules or rules that were a compromise with soccer.”

St Stanislaus' College, Tullabeg, Rahan, defeated a Tullamore team 5-0 in a 12-a-side match in December 8, 1877 and six days later a Tullamore team travelled to Geashill and beat a village side 4-2.

“The third match, on Thursday, December 27, reportedly played in front of more than 700 spectators at Tullamore, was a scoreless draw between a ‘Tullamore XV’ and a ‘Mr Thomasson’s XV’ that was drawn at least in part from the Geashill team,” Moore's research found.

Tullamore and St Stanislaus’ went on to play a number of matches over the next four seasons that “are clearly recorded as soccer”.

“They played each other at least annually at Tullabeg for the next four seasons: six matches in total, the last of which ended in a 2-2 draw in November 1881.”

Two years before that the Tullamore team had constituted itself as a formal ‘dual code’ football club, when a meeting decided that the club should alternate between playing association and rugby rules.

“This meeting was on September 22, only a few days since Cliftonville [Belfast] – traditionally understood to be Ireland’s first soccer club – had been formed. The press report does not describe the meeting as an inaugural one, so it is possible that the club had been in existence for some time, which would make Tullamore Ireland’s first club. But there is no positive evidence to support this.”

There is also a record from 1881 of soccer being played by teams from the Royal School in Banagher.

A Parsonstown Football Club was formed in Birr for the 1883–84 season, which played rugby and association rules (mainly rugby) for three seasons.

Tullamore played three soccer games in 1884–85 against Cloghan, Castlerea and Dublin Association and there is no further record “until a football match at the club grounds at Spollinstown against Timolin in January 1887 which was said to have drawn an ‘enormous concourse of spectators’,” but it’s not clear if it was under association rules.

Moore writes: “From 1885, Gaelic football rules were introduced to the county: Timolin, Eglish, Killyon and Coolderry played under these new rules in March and April 1885. From this time, there are reports of various football matches played by teams in the county from which the particular code is not clear. It seems likely that some were Gaelic football matches, but there are also references to tries being scored and a match played by Coolderry in 1886 was recorded as rugby. In January 1886, a meeting in Banagher debated which football rules to adopt, and a majority chose the GAA rules.”

A letter in the Midland Tribune in July 1887 condemned the Tullamore Athletic Club, under whose auspices the football teams played, for holding an athletics meeting under the rules of the ‘West British Faction’. In April 1888 there is a report of a violent attack on the Tullamore club grounds by ‘a motley gathering of roughs’ who were ‘armed with hurleys’.

See this week's Tullamore Tribune and Midland Tribune for Martin Moore's report on his research.  Martin Moore’s article ‘Early Association Football in Ireland: Embryonic Diffusion Outside Ulster, 1877–1882’ is published in the Sport in History journal - https://doi.org/10.1080/17460263.2021.1873830