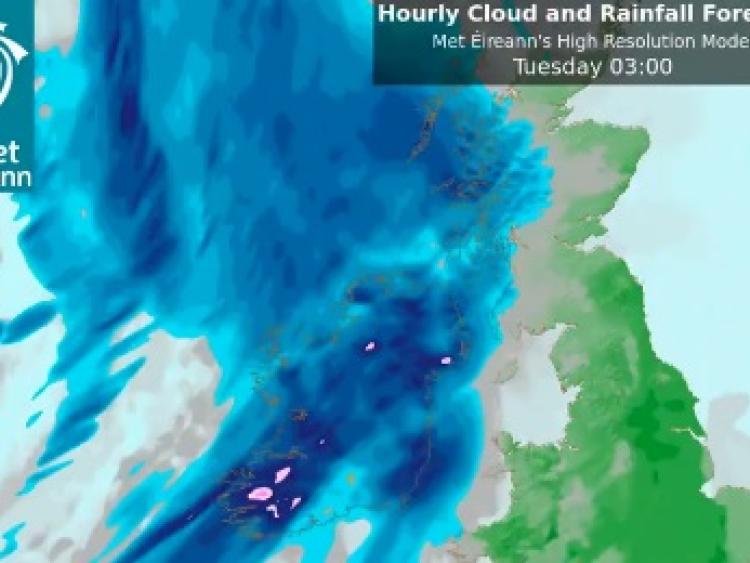 Met Éireann has issued a series of weather warnings ahead of stormy weather which is set dump a lot of rain on Ireland raising the risk of flooding in parts.

A Status Orange rainfall warning for Cork, Kerry, Tipperary, Waterford warns of very heavy rain on Monday night and Tuesday which, Met Éireann says will likely cause further river flooding and surface water flooding. Between 50 to 80mm or rain is expected higher in mountainous regions.

The alert is valid from 7pm on Monday to 9pm on Tuesday.

A Status Yellow rain warning has been issued for heavy rain for all Leinster counties, Cavan, Monaghan, Clare, Limerick and Connacht.

It says the rain on Monday night and Tuesday will lead to some river flooding and localised surface flooding. Rainfall totals of 30 to 50mm, higher in mountainous regions.

The alert is valid from 9pm on Monday to 9pm on Tuesday.

It says southerly winds will reach mean wind speeds of 50 to 65km/h, with gusts of 90 to 110km/h, possibly higher on exposed coasts. Where winds are onshore, Met Éireann says there is a risk of coastal flooding. ​

The warning is valid from 9pm on Monday to 6 am on Tuesday.

Warnings are also in place for Northern Ireland and marine areas around Ireland's coasts.

Here is the latest cloud ☁️ and rainfall ️forecast from our HARMONIE weather model. It covers the period from now until Wednesday morning. Mostly dry for many today, but rain and strengthening winds arriving tonight. More here ➡️https://t.co/9gKN6SVok4 pic.twitter.com/MeDnLYWRi3