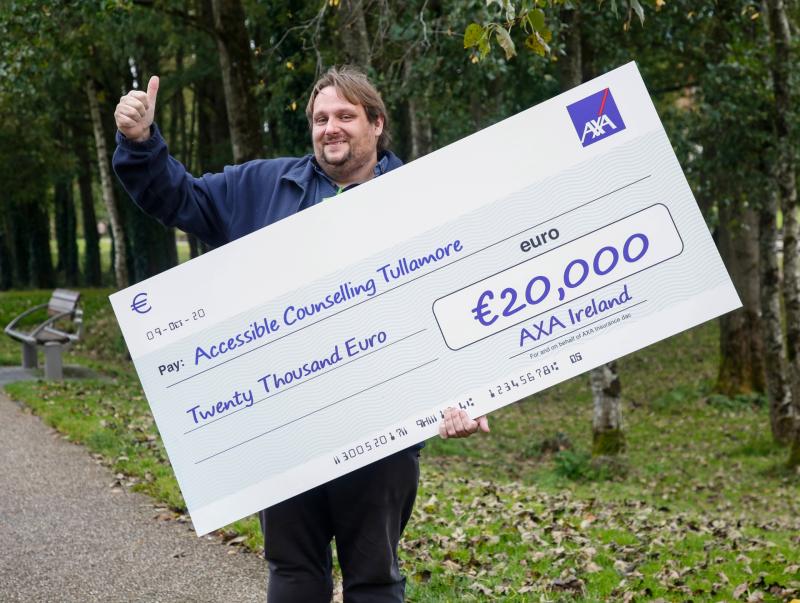 A true Community Hero from Offaly has been hounoured on the Late Late Show.

James O’Connor from Tullamore has been named as one of only five winners of the AXA Community Hero Awards 2020.

James was announced as one of the winners by Ryan Tubridy on tonight’s Late Late Show. James was selected for his extraordinary work in setting up Accessible Counselling Tullamore (ACT) which provides accessible counselling services for the benefit of adults in the midlands.

James set up the amazing service after a heart-breaking personal tragedy. He felt his world had ended after his little girl died. He bottled things up and eventually had a serious breakdown and attempted suicide. However he battled through his struggles with mental health and over the years he learned how to deal with this tragedy.  He has now come to value the role of counselling in helping people to recover.

Each of the five winners in this national awards scheme has nominated a charity which will receive €20,000 from AXA.  James has selected ACT who will use the proceeds to develop their work programme.

AXA will also present James with a personal award of €5,000 to mark his achievement.  Originally it was only intended to select one winner in this national competition but in response to over 1,000 nominations which poured in during the Summer, AXA increased the number of winners to five and increased the total prize fund from €25,000 to €125,000.

The AXA Community Hero awards was set up to recognize individuals who supported their friends, colleagues and neighbours during recent difficult months.  AXA is Ireland’s largest insurance company and has previously run campaigns to celebrate Farm Heroes and to support workers returning to work in the Irish health services during the Covid 19 crisis.

Speaking today Antoinette McDonald, Director at AXA said; “James suffered a devastating tragedy with the death of his daughter, but he has used that awful experience to set up ACT as a specialist counselling services for adults in the midlands to help other people cope with their own tragedies.  His story is one of remarkable selflessness and kindness and we are delighted to honor him with this award and to support this great charity.”