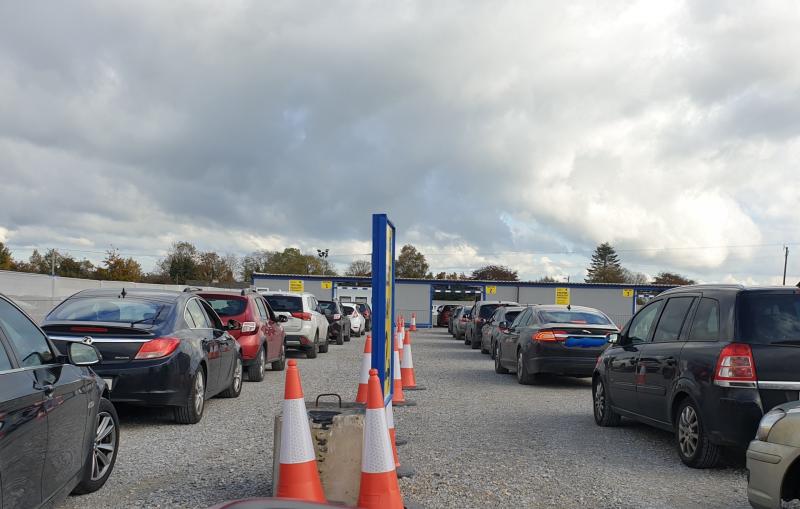 VOLUNTEERS across a range of health service disciplines are being asked to undertake Covid-19 testing duties as demand on the service increases.

An urgent call for staff to carry out swabbing was made on New Year's Eve in Westmeath and Longford where volunteers were told they would be placed on a list for receipt of the Covid vaccine this month.

A HSE manager circulated an email to health and social care professionals (HSCPs) telling them: “I did not think I would be asking for your help quite so quickly”.

The manager said the Westmeath and Longford testing centres had been under pressure since Christmas Eve and were offering between 550 and 700 test appointments every day.

HSCPs had not been involved in swabbing since November but “clinical leads” from that sector remained on-site at testing centres.

HSE staff were told it was necessary to have three clinical leads on site “such is the volume of appointments”.

On New Year's Eve there were six community swabbers in Longford and 13 in Westmeath, working five days a week from 8.45am to 5.15pm.

Senior staff in areas such as physio, dental care and occupational therapy were asked if any members of their teams could be rostered for one day in every 14 days for January.

“I have been notified that anyone involved in testing is going to be vaccinated in [January] through the hospital. Whatever staff you make available to me for testing even for one day in the month I will submit their details for vaccination,” the manager's email said.

The manager apologised for “asking again for your co-operation and patience” and they were assured they could decline to assist if their services did not have capacity.

The manager also pledged not to over burden any staff member or service and to share the load evenly.

On January 3 an email was sent saying HSCPs had “been truly remarkable in their courage and work ethic in responding as community frontline workers” since March 2020 including working Christmas Day, New Year’s Day and bank holidays.

Rosters drawn up between January 4 and January 10 indicated that staff from speech and language therapy, occupational therapy, nursing and physiotherapy were diverted to swabbing duties.

On January 3 there were 18 community swabbers for Westmeath and Longford but two were on sick leave and two others were engaged in the 'swiftqueue' online appointment duties, resulting in 14 being available for swabbing at two test centres.

In a statement this week, the HSE said since March 16 last year anyone in Longford or Westmeath who was referred for a Covid-19 test received an appointment within 24 hours.

Last September, a national recruitment campaign was launched for community swabbers and that campaign is still running in Longford and Westmeath where the community team “continues to receive” members.

The HSE spokesman said more than 30 community swabbers had been recuited for Laois and Offaly.

“All care groups are presently supporting testing in Longford–Westmeath and we are continuing to add swab team members in Longford-Westmeath,” he added.