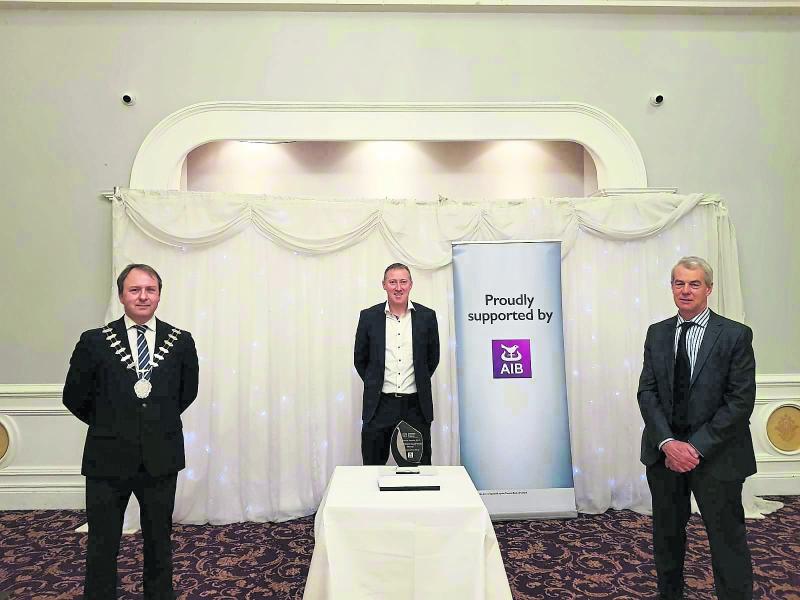 THE prestigious annual Tullamore and District Chamber of commerce Business Awards were presented just before Christmas.

Ciaran Stewart was selected as the Tullamore & District Chamber Business Person of the Year.

Ciaran received the award for outstanding achievement in service, operations, marketing and public relations. Ciarán is a franchisee with Supermac’s since 2010.

After spending 10 years at the top of William’s Street as the owner of Supermac’s where there are 40 people employed, there’s a lot to be positive about in Tullamore according to Ciarán Stewart.

“There is a lot to be positive about in Tullamore and I would like to acknowledge the Chamber and all the businesses for all they have done to promote Tullamore over the years. We have had a few very difficult years with Covid and roadworks but we are resilient and innovative and we will keep the flag flying,” Ciaran said.

“Supporting the community is a part of the ethos of Supermac’s nationally and we are delighted to sponsor Tullamore GAA, Tullamore Rugby and the Tullamore Half Marathon to name a few,” Ciaran said.

“There’s a lot to be positive about Tullamore. Events like the Tullamore Show were hugely important to businesses and going forward will be even more important. Another exciting development is the Tullamore Dew Distillery,” he said.

“Tullamore has a lot going for it as a town centre,” he said.

Last year Ciarán was involved with local traders to promote the town centre. The ‘Tullamore Is Your Town And Tullamore Is Open For Business’ campaigns were an effort to entice customers back to the town following on from the impact of the roadworks and were backed by local businesses and celebrities like Chasing Abbey.

“There are towns and villages throughout the country that would be delighted to have the facilities that Tullamore has. We have parking for 2000 cars, some of the best retail outlets in the country as well as some excellent restaurants and hotels. Tullamore is open for business,” Ciarán said. “I would also like to thank Pat and Una McDonagh for their continued support,” he said.

He currently also has outlets in Navan and Drogheda employing approximately 150 staff. Ciaran started with Supermac’s in 1995 at the Headford Road branch. He quickly progressed to the position of Assistant Manager in 1997. Following this he was appointed store manager in 1999 and Ciarán was promoted to the position of Area Manager for Galway in 2001 with responsibility for eight stores in Galway city and county. In 2006 Ciaran was appointed Operations Manager for Papa John’s Pizza in Ireland where he was responsible for the growth and development of Papa John’s in the Irish market.

“Ciarán has worked extremely hard to get to where he is today. Winning an award of this nature is because of the effort that is put into the business and the local community. He has taken the opportunities that has come his way and has met the challenges he and his team has faced to develop a very successful business. I would like to congratulate Ciarán and his staff on winning this award and I know that he and his team will go from strength to strength,” he said