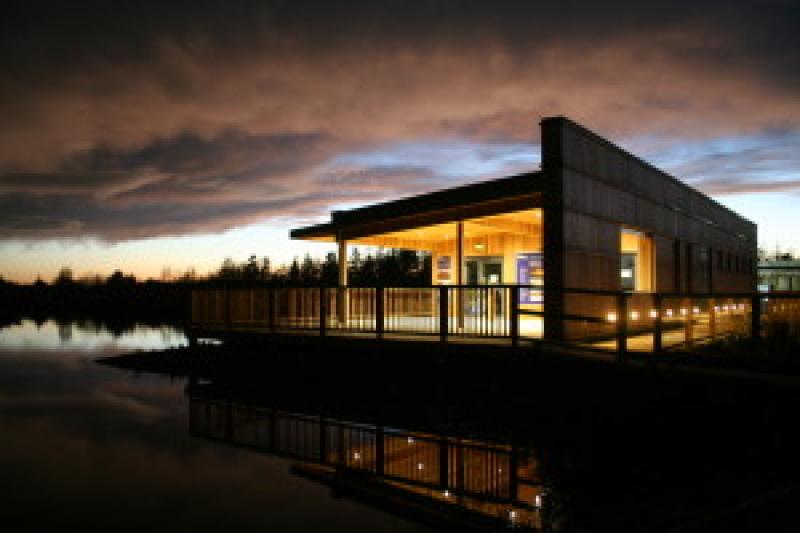 Offaly has taken a major step towards being a Green economic region, with the announcement that a major innovation hub will be created in Lough Boora and 97 jobs will come onstream.

During their December monthly meeting many of the councillors of Offaly County Council warmly welcomed the news, which was conveyed to them by a number of people via zoom link, including Professor Neil Rowan from Athlone Institute of Technology and Orla Casey from Momentum Consulting.

The project will create a National Centre of Eco Innovation which will be funded by €1.1 million from the Just Transition Fund, and will be located in the Bord na Móna complex in Lough Boora.

The project is called Empower Eco and will entail the collaboration of many players. Empower Eco was formed in the early days of the Lockdown in March as a collaboration between Athlone Institute of Technology, Bord na Móna, Enterprise Ireland, Offaly County Council, LEO Offaly, Limerick Institute of technology, Maynooth University and Kilcormac Development Association.

Empower Eco is chaired by Rita Shah, founder and CEO of Shabra Plastics and Recycling Limited. Professor Rowan said it will be “a major gamechanger” for Offaly, entailing the establishment “of a national centre of eco innovation which will be devoted to research, entrepreneurship, training and social enterprise. The unique midlands of Offaly and the midlands in general will be a primary focus including its ability as a carbon sink, which will be such a vital thing in the fight against climate change.”

Professor Rowan said the project will establish “an innovation hub”, in Lough Boora, and will establish “living labs. It will create test beds across the peatlands.” It will be done according to international best practice, featuring a number of different aspects specializing in peatland based innovations, including the “ambitious hub” in Boora; agri food; aquaculture at Mountlucas; medicinal plants (34 hectares have already been planted); agro and eco forestry; pollination (to enable the regeneration of bees and insects); renewables; and education technologies.

A lot of jobs will arise as a result, beginning with a total of 97 jobs over the next two years, and it's planned that more will be added after that.

The Empower Eco HQ in Lough Boora will be officially opened in the first quarter of 2022. Professor Rowan spoke about “the empowerment of 20 start-up SMEs in Offaly which will create 22 jobs,” and the councillors were also told about “an acceleration process for ten high potential scale-ups which will unlock over €500,000 of private investment in these companies and create 25 new jobs.”

In the Lough Boora HQ / enterprise hub the old workshops which are presently there will be repurposed and reopened in the first quarter of 2021. This will be 60,000 square feet of enterprise units and they “will be an inspiring place”. Three universities will be liaised with the units.

Rhode Green Energy Park and I-LOFAR in Birr will also be linked with the Empower Eco project. “All the various groupings and organisations will be brought together into a connected eco-infrastructure,” commented Orla Casey. There will be an opportunity to accelerate the development of Ireland's first freshwater aquaculture enterprise, at Mount Lucas, which is breeding and raising perch and trout and is fired by wind turbines.

Edenderry biomass will be a vital part. There is a plan to grow biomass power production from 40% to 100% by 2024 which will entail reforesting peatlands to create fuel for the biomass power plant.

Cllr John Carroll warmly welcomed the project. “This is a wonderful and exciting project,” he said. “This seems to be the first really positive step on the region's way of moving from peat dependency to a new world.”

“As Chair of KDA,” said Cllr John Leahy, “it gives me great pride to be part of this. It will be a huge transformation for our area, where the former peatlands and peat power plants will be the hub of a new eco industry.”

Cllr Eamon Dooley welcomed the creation of 97 new jobs. “When will they be advertised?” he asked. He said the existing buildings in Boora which will be upgraded are concrete with asbestos roofs. “How feasible will it be to make them fit for purpose?” He asked where the funding for the project is coming from. He added that forestry on cutaway bogs had been tried over the last three decades and had not worked.

Cllr Peter Ormond pointed out that it's the first time in a long time “that we are actually seeing some positive job numbers since Bord na Móna started winding down. I welcome the link with the universities. That is very important. This project is a very good step going forward. I am very happy to hear this good news today.”

Professor Rowan said €2.6 million in funding will also be coming from the EU along with a number of other funding streams. He said there are new and better ways of planting forestry on the cutaway bogs than heretofore.

Cllr Neil Feighery said after the depressing spectacle of seeing the closure of Shannonbridge Power Station the week before, this was a welcome development. “This is very encouraging. Will the new jobs be sustainable or will they have to be continuously propped up by Just Transition?” He was told they will be self-sustaining.

Cllr John Clendennen said there had been a lot of negativity in Offaly over recent months and years because of Bord na Móna's winding down and it was a morale boost to hear something positive. “It looks as if Offaly will now establish itself as a centre for Green economic enterprises. We should now do everything we can to stop Shannonbridge Power Station from being demolished. It could house a number of things including tourism hubs. Why can it be done in buildings in Lough Boora but there seems to be no appetite for doing the same with the power plant in Shannonbridge?”

Cllr Danny Owens also welcomed the news, saying it had been a very interesting presentation, which was announcing the opening up of a whole new realm. He welcomed the involvement of third level educational institutions because it could lead to outreach centres in various locations in Offaly. He said the people who should be first in the queue for the new jobs should be the Bord na Móna families who want to stay in the region.

Cllr Tony McCormack said that this good news is a very important moment for Offaly and the wider region. He added that unfortunately the Just Transition funding is being spread out over a number of counties which are not being as badly affected as Offaly is.

Cllr Eddie Fitzpatrick said he is a neighbour of the exotic mushrooms enterprise in Garryhinch. “The commercial mushroom enterprise failed there when Brexit hit. But Joe Gorman is very resourceful and he branched out into timber-based compost and exotic mushrooms.”

Cllr Seán O'Brien welcomed the possibilities emerging from these projects. “It's good to know that in spite of the transition away from peat harvesting there is still gold in them there bogs.” He said the future of the region and keeping our young people in the region were matters of great importance and concern, “following what has been the hammerblow to the region of Bord na Móna transitioning away from peat harvesting.”

Cllr Carroll said there will always be scepticism but today's presentation was an exciting thing bringing with it a sense of something brighter and more hopeful.

Vincent Redmond, Head of New Business in Bord na Móna, pointed out that Empower Eco “is an exciting initiative that aligns with the ambition and strategic trajectory of Bord na Móna as it pivots from 'Brown to Green' in order to pioneer new climate solutions for the midlands.” He said the Empower Eco system will “cluster Ireland's first connected regional ecosystem of sustainability, enterprise and eco-innovation projects in the Midlands. Building a community of eco enterprise projects, testbeds and living labs through a connected web portal will make it easy for bodies such as IDA, Enterprise Ireland, researchers and educators to market the Midlands as a hotspot of eco-innovation, project collaboration, research and investment.”

Professor Rowan said the philosophy of Empower Eco is to use the natural world in clever ways to meet human needs. “Empower Eco will provide an intellectual and innovative powerhouse for the Midlands that will actualise its immense potential for creating a greener future.”