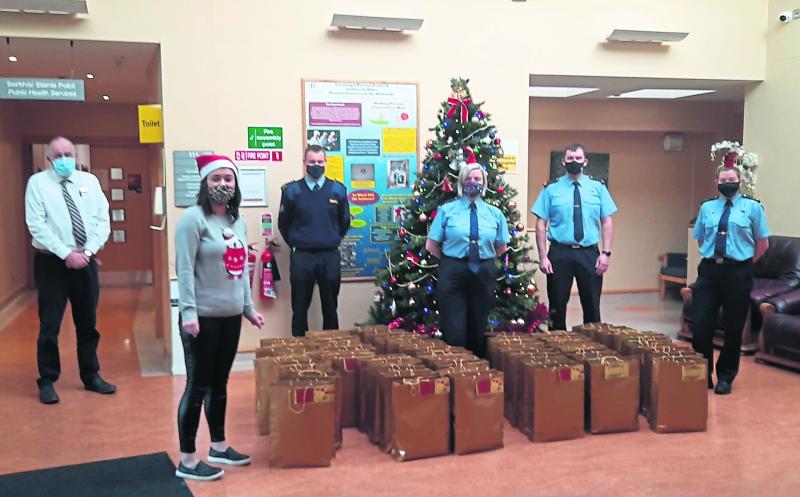 Over sixty Christmas parcels were delivered to a Community Nursing Unit in Offaly as part of a festive initiative to spread some Christmas cheer.

The project, organised by members of An Garda Siochana and the Scurragh Youth Initiative, was undertaken over the last couple of weeks and saw 63 parcels delivered to Birr Community Nursing Unit on Friday last.

Speaking to the Tribune last week, Rachael Moloney, from Offaly Local Development Company, outlined how the project was the idea of Garda Grace Heffernan. It began with a poster competition, organised with all of the national schools in the Garda District. “Then, we wanted to see what else we could do,” she explained.

“We wanted to get the rest of the community involved and show, in particular, young people in a positive light,” she enthused.
The members of the Scurragh Youth inititiave were then delighted to come on board and offer their help with the project.

“We got a day out in Penny's in Limerick to do a community secret santa and the participants of the Scurragh Youth initiative then put all the packs together for the 63 residents with the support of the SUB project, the Garda Youth Diversion Project. We were able to use this space to get all the young people together and over four evenings we put the bags together,” Rachael outlined.

Garda Heffernan thanked Rachael and Offaly Local Development Company for their support with the project.

“We wouldn't have been able to do it without them along with Superintendent Furlong and OLDC, who funded the project,” she added.
The pair also thanked Mr Price and Penny's Limerick for their support of the project while the parcels were distributed amongst the residents earlier this week.