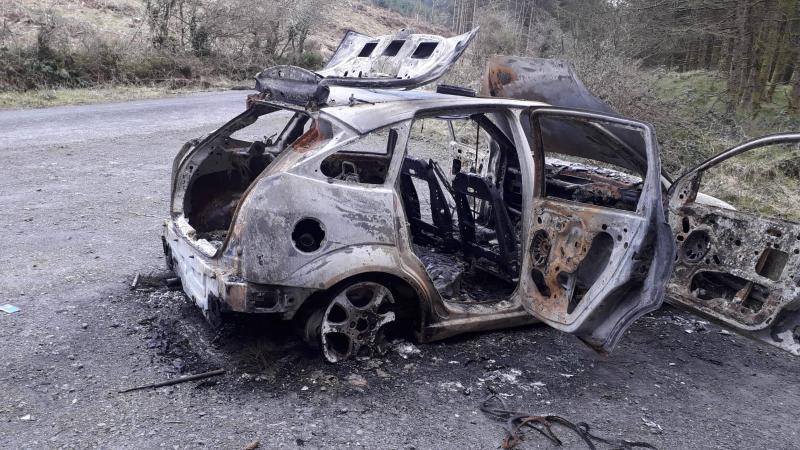 A burned out car on the mountains in July

There have been fresh complaints from members of the public about boy racing in the Slieve Bloom Mountains.

On Saturday night, December 12, boy racers were heard driving at high speeds up and down Glendine East, one of the most remote valleys in the Slieve Blooms.

"It was like Mondello racetrack," a local told the Tribune. "The noise started at 8pm and finished at 11pm. There were several cars involved, driven by young men, going at very high speeds. The noise level was high, reverberating throughout the whole valley, which is several miles long."

There is a viewing point on the road near Fanning Pass which the boy racers particularly like. They like to congregate here. When they leave there is a lot of rubbish left behind.

Cllr John Clendennen said he thought the problem of boy racing had been dealt with during the summer, and he was sorry to hear it has re-emerged.

"We were getting a lot of complaints about it during the summer, with locals saying it was occurring at a number of locations in the hills. In July about a hundred boy racing cars congregated in Kinnitty village itself before driving to a racing location. The people in Kinnitty were very intimidated by this."

Cllr Clendennen praised the Gardaí for "getting a handle on the situation" during July and August by patrolling the hills. "The Guards did great work and the boy racing problem disappeared. I am sorry to hear it has now re-emerged."

He said that as well as intimidating people and animals, the boy racers also light bonfires and leave behind burned out cars.
Fly tipping and illegal dumping remain significant problems in the Slieve Blooms.