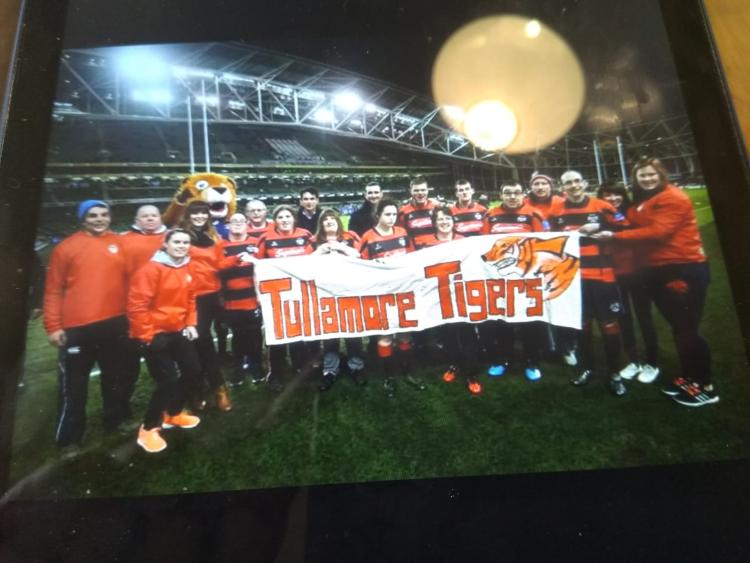 Members of Tullamore Rugby Club Tigers in the Aviva Stadium.

The Tigers was born from an idea brought to Tullamore Rugby Club by  Martin Nunan  in the early summer of 2016 when he asked if two of the club coaches or volenteers would be willing to take this project on board: the orginal two of J. Burns, P. Cronin and A. Byrne (Offaly County Council Sports Partnership) were joined by R Kane.

A discussion was set to find out the full details of what the full extent this would mean in relation to given the best foundation in rugby that we are able to give having understood the individual varing levels of disability, which we would have to do on a one to one basis after meeting the players. A training session was set up after M Nunan had discussions with several organisations in the town and surrounding catachement area. Huge help was given from Rehab care including staff to help out and offer great advice in relation to individuals with different levels of disability - originally 15 players were involved and now there are 41 players on the membership list.

Training was to take place on Mondays at 11.30 for an hour to start with and Martin was to set up a friendly match with Mullingar who also had set up a similar side called the Mullingar Lions. The Players were asked to come up with a name for themselves and several were put forward and voted on by them after which it was decided that the team would now be known as the Tullamore Tigers.

The Tigers attended 4 Tournaments over the first summer in 2016 and held their first home tournament in September of that year which was attended by 7 other clubs from the leinster area. The Tigers were approached by Leinster Branch to ask if they would first like to play in the half time slot in the RDS and following to play in the half time slot in the European match in the Arriva before Christmas. They did this in both, supported by a big crowd in the RDS and again by the whole Club who travelled by train to the Arriva just before Christmas of 2016 and all players were given the chance to neet some of the players and have photos and a chat with them

As of this current time the Tigers have played in the RDS two times, Donnybrook twotimes and the Aviva.

Since then, the Tigers have played in over 20 Tournaments (over 90 games)- they have had a further two home tournaments and two awards nights held in the club and been given amazing help and support by the people and buisnesses of Tullamore

In 2018 we were joined on the coaching side by G. Cronin as our fitness and game coach and he has done a fantastic job since. We have also had a lot of new players come into us and we are currently looking into playing two teams on a regular basis from next year. It was our goal to do this in 2020 but due to the world wide Covid-19 pandemic a lot of improvement plans along with our hope to bring on an underage side as currently our players are all senior level with an age range from 20 to 52, had to be abandoned.

Fininally a big thank you to Tullamore Rugby Club, our coaches, helpers and especially to the parents of our players without who this would not have gone ahead – there are too many to list but you know who you are.