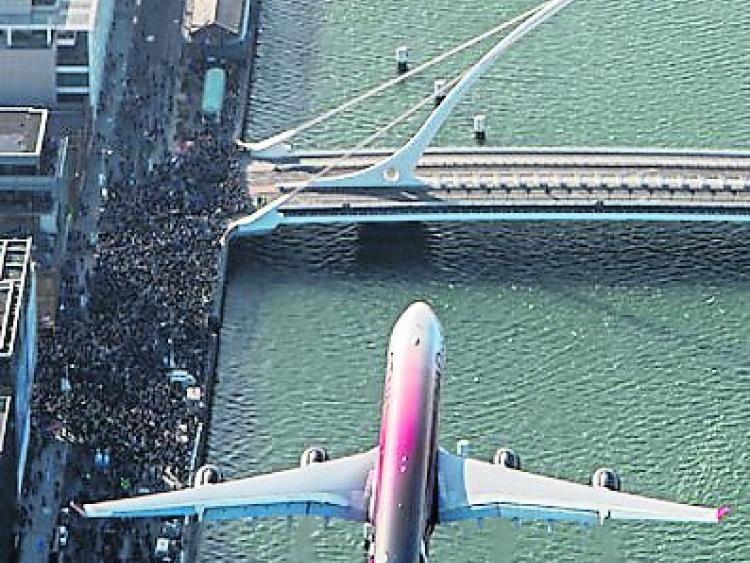 One of many stunning pictures from new book "Irish Air Spectacular" which has been produced by Birr pilot Sé Pardy and printed by Brosna Press. The proceeds will go to St Vincent de Paul in Birr.

Birr man and Aer Lingus pilot Sé Pardy has been the driving force behind a fantastic book published this week which features a collection of magnificent aviation photographs, and the proceeds of which will go to St Vincent de Paul.

“I help out with an annual aviation fundraiser for St Vincent de Paul in Birr,” explained Sé. “As part of this initiative we have produced a book of aviation images featuring many of the various events we have been involved in, including the air displays in Birr and the Obama visit to Moneygall.

“The book is designed and printed by Brosna Press and the profits will go to St Vincent de Paul in Birr.

“If people want a copy of the book they can chat to Paul Kelly in the Birr St Vincent de Paul office, assuming it reopens on December 1. Paul will be happy to sort any local orders in the interim.”

Sé said there is more information on www.airspectacular.ie and this website also has an excellent video.

The book is called “Irish Air Spectacular” and it features 160 pages of beautiful photographs in an elegant, hardback format.

he photographs show aircraft in flight, against the backdrop of Ireland's splendid landscape. It features special views from the cockpit as well as rare air-to-air photos.

The publication will appeal to many, including fans of aviation, lovers of our landscape and admirers of great photography.
The photos span 15 years, sometimes capturing key moments in Irish life including the National Ploughing Championships in 2014, the flypast during U2's Joshua Tree concert at Croke Park in 2017, and the first delivery of PPE equipment to Ireland during this year's Covid-19 pandemic.

Some of the best aerobatic display teams in the world (the Patrouille Suisse, the Red Arrows and Frecce Tricolori) are featured, as well as dramatic manoeuvres by the AeroSuperBatics Wingwalkers, Team Raven and the Royal Jordanian Falcons.
Spectacular aerobatic manoeuvres by some of the UK and Ireland’s most talented pilots – Eddie Goggins, Richard Goodwin and Steve Jones as well as previous Air Series World Champion Paul Bonhomme – are captured by Frank Grealish, and many other very talented photographers. The skill and expertise of the Irish Coast Guard, Irish Air Corps and Irish Parachute Club is also on display.

Joseph O’Connor’s poem, ‘First flight of the Iolar’, sets the scene at the beginning of the book and in the foreword, Eamonn Brennan, Director General, Eurocontrol and former CEO, Irish Aviation Authority captures the essence of Irish Air Spectacular describing it as a ‘celebration of flight’.

“Buying a copy of Irish Air Spectacular is a wonderful way to help those who need support during these particularly challenging times,” said Sé. “I would encourage everyone in a position to do so to treat themselves, a loved one or a colleague to a copy of what is a beautiful publication that we are very proud of. Over the past 20 years we have raised more than €200,000 through various initiatives for St Vincent de Paul. We hope that this very special book will add to that and raise significant funds for what is a great cause.”

“This inspiring photography book will not only provide a magnificent Christmas present,” said Rose McGowan, National President, the Society of St. Vincent de Paul (SVP), “but in the process will raise much needed funds for SVP. We always need donations to continue to provide support to the many thousands of individuals and families who seek our help throughout the year. The lead up to Christmas is a difficult time for many families and a time when our support is in great demand. This year our Annual Appeal will be one of the most crucial in years due to the Covid-19 restrictions which have resulted in some of our normal funding streams being cut off.

“Our sincere thanks to Sé Pardy, Brosna Press and the many talented photographers who contributed their work to the book and everyone else involved in the production of Irish Air Spectacular.”

Sé grew up in Syngefield in Birr. Growing up he had a fascination with aircraft and joined Air Traffic Control in 1984 and Aer Lingus in 1988. Sé is currently a Captain on Aer Lingus flights to Europe. He's married to Jean and they have two children, Thomas and Ava.

Sé helps out with the annual Bray Air Display and a number of other events. He is also the founder of Simtech Aviation, which is a flight simulator and aviation training company, which he continues to manage.

He says the aviation fundraisers for St Vincent de Paul in Birr have raised, over the years, €200,000. “It is the greatest event we are involved in,” he said, “and it brings the most satisfaction.”