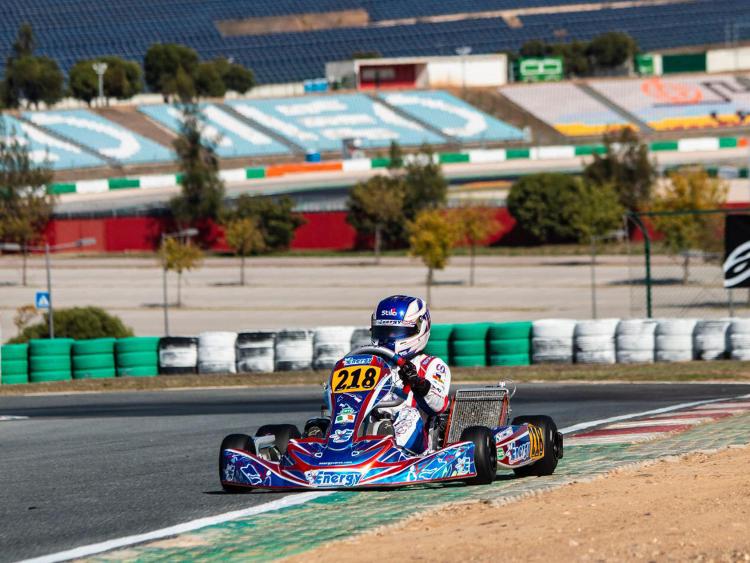 Following last weekends' warm-up event at the Kartódromo Internacional do Algarve in Portimao, Portugal, Offaly's Alex Dunne returns to the same venue this weekend for the biggest race of his career so far, where he will be Ireland's only representative at the FIA Karting World Championship.

The Portimao event sees the 14-year-old from Clonbullogue tackle his first Senior Karting World Championship. Racing in the 'OK' Category, for drivers from fourteen years old and upwards, Alex will drive for the works Energy Kart team, as their sole senior driver at World Championship level, against an experienced field of eighty drivers from 26 countries.

Last weekend's warm-up event saw Alex working with the Energy Kart team for the first time at a race weekend and both he and the team treated it as testing and preparation for the World Championship. Having started off with a strong qualifying performance, the team then worked through a variety of chassis settings in order to find the optimum set up for this weekend. Despite not running the same settings two races in a row, the teenager still managed a string of good results to qualify tenth for the pre-final.

Problems in the pre-final, which would decide the grid for the final, dropped Alex down the order and left him with a major task, as he would start thirtieth for the deciding race. Having made a good start the Irish driver then lost valuable track time when he went off on the first lap, avoiding an incident between two other drivers, damaged his Kart and had to retire from the race.

Speaking about his preparations for the World Championship, Alex was happy with the progress made on his first trip to the Portuguese track. “Looking at the results it seemed like an up and down weekend, but it was actually very positive as we were trying loads of different things on the Kart to see what would and would not work. I learned loads and I now have a very good idea of which way to go on set-up for this weekend.

"We had good speed in last Friday's qualifying and the first heat, and the set-up we initially used, along with the changes we tried, will make me a strong contender this weekend. The atmosphere in the team is really good and I know that everything is now in place to have a really good run this weekend and I'm going back to Portimao aiming to win the World title.”

Alex Dunne's progress through the three days of the World Championship can be followed on the FIA Karting website and social media channels, as well as through the event livestream on Saturday and Sunday. For more information on Alex and links to the event timing and livestream see www.alexdunneracing.com.