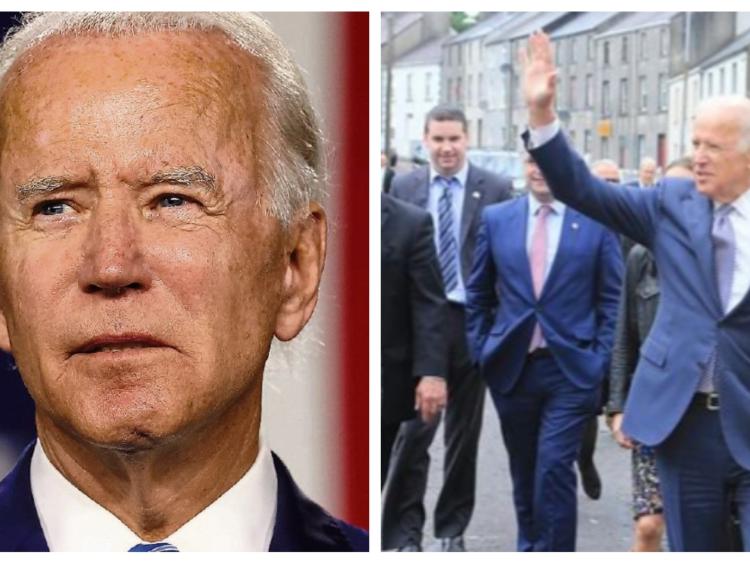 As US Presidential election fever ramps up ahead of next Tuesday's historic vote, an Offaly man has been recounting the day he briefed Democratic candidate Joe Biden on his Irish links.

As part of the visit, Edenderry native and acclaimed Maynooth University historian, Dr Ciaran Reilly, sat down and briefed Mr Biden on his personal connections to Ireland through his ancestor.

Dr Reilly recounted this meeting and the story of Edward Blewitt in a recent RTE Brainstorm article.

"The visit by the then US vice-president to the site of the Blewitt home on Garden Street in 2016 was a private affair away from the huge media presence which had gathered in the town. I was chosen to brief the vice-president about the role of his ancestors in overseeing the public works scheme during the Famine. Joined by his brother, sister and grandchildren Biden was particularly anxious for the latter to learn about their ancestors and the Great Famine," he continued.

"The Famine narrative has obviously been dominated by death, disease and hunger, but what of those that survived? How did people survive the Famine? In briefing Biden, I wanted to highlight that important part of the Famine story, which is often overlooked.

At the time in 1847, 3,000 people were cramped into a Ballina workhouse built for around 1,200. The conditions were dreadful and people were left without food for days. "The union had run out of money and the ratepayers who had previously supplemented the cost of maintaining the poor were themselves on the brink of disaster," Dr Reilly explained.

"Investigating the allegations, the Relief Commissioners at Dublin Castle sent a Lieutenant Hamilton to ascertain what was happening in Ballina's workhouse. His report depicted the appalling mismanagement of the union and the board of guardians were quickly disbanded as a result. To avert further death in Ballina, the relief commissioners believed that a scheme of outdoor work was needed. Lieutenant Hamilton suggested that a general overseer be appointed to superintend the works, someone who had the right credentials and the ability to save lives in the process.

"Enter Edward Blewitt. He had already been involved in two of the largest mapping endeavours of the 19th century – the Ordnance Survey in the 1830s and Griffiths Valuation in the 1840s - and was sometime employed by the parish vestry to value and plot land for the payment of tithes. He had a working relationship with Henry Brett, then county surveyor of Mayo who was responsible for famine relief efforts in the county. Taking them from the dreaded workhouse system, Blewitt’s judicious management of the scheme kept thousands alive building roads and carrying out drainage work."

He was met with resistance of people who wanted better pay and others who refused to work and so employed a test to determine such matters. "Blewitt was faced with the predicament that in saving lives many others would succumb to death. To prevent this from happening, Blewitt began to place the men working on projects close to their homes and replaced the arduous journeys that they undertook," Reilly wrote.

"Blewitt also oversaw drainage works allowing for greater cultivation of the land. This was made possible by the introduction of the land improvement loans and which allowed landlords to carry out necessary improvements in the process."

After his work in Mayo drew to a close, Blewitt made the decision to emigrate to America and Dr Reilly says, "once again, Blewitt’s resilience shone through and he had established himself as a ‘land surveyor’ in Scranton, Pennslyvania within a decade. His family prospered there and laid the foundations for others from Co Mayo to join them."

"Edward Blewitt died tragically in 1872 near Scranton, more than 20 years after he had helped alleviate the plight of the poor during the greatest catastrophe of 19th century Europe."

During his visit to Ballina in 2016, Joe Biden listened intently to Ciaran Reilly, enthralled with the role his ancestor had played in the darkest hour of Ireland's history. Having heard the story, Biden, accompanied by then Taoiseach Enda Kenny, interjected 'do you hear that, we should be very proud!'"

The US Presidential election takes place on Tuesday, November 3, with Joe Biden hoping to oust incumbent Donald Trump from the White House. He is currently the bookies' favourite to win what is predicted to be another tight election.