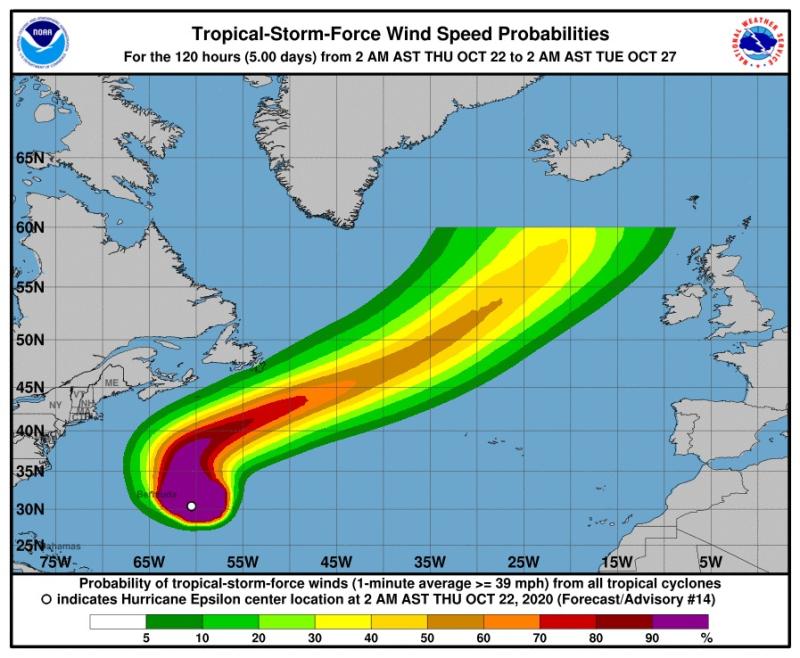 Met Éireann has issued a number of Status Yellow weather warnings but is also warning that the remnants of a former Hurricane Epsilon will be felt in Ireland next week.

The forecaster has issued Status Yellow - wind and rain weather warns for Friday night into Saturday morning for west and southern coastal counties.

In a commentary on the weather expected Met Éireann meteorologist, Liz Walsh says that over the coming week, the Jet Stream is expected to help deepen areas of low pressure and direct them generally between Ireland and Iceland.

She says associated Atlantic frontal systems will cross the country resulting in successive spells of wet and windy, potentially stormy, weather, especially this weekend and on into early next week.

"On Friday, an Atlantic low-pressure system is expected to engage with the Jet Stream and rapidly deepen. The low itself is expected to track between Iceland and Ireland but the associated active frontal system will cross the country on Friday night and Saturday morning resulting in a period of very strong winds and heavy rain.

"The next Atlantic low-pressure system that will affect Ireland after Saturday will be early next week and that low-pressure system will likely contain the remnants of Epsilon, currently a category 1 hurricane which is expected to curve northeastwards to the east of Bermuda this weekend.

"As mentioned in one of our meteorologist commentaries from last month, (see "The 2020 Hurricane Season so far" meteorologist commentary) we passed the peak of Atlantic Hurricane Season quite a while ago. In that commentary, it was also mentioned that:  “The delayed warming of the Atlantic Ocean forces the location of extra-tropical transitioning storms northward late in the season so here in Ireland, we are more likely to see the remnants of these storms influencing our weather over the coming weeks and months.” And looking at the current set-up in the Atlantic right now, we can see that situation appears to be developing," she says.

There is a risk of localised and flash flooding with 20 – 40mm expected.

In its forecast for the weekend Met Éireann says wet and very windy weather will move into Atlantic counties early Friday night and extend countrywide later. The heaviest of the rain will continue across Atlantic counties overnight with some possible flooding here. Coolest early on with lowest temperatures of 5 to 9 degrees Celsius, in strong to gale force south to southwest winds.

It says a 'steering low' south of Iceland will continue to feed in very wet and windy early Saturday. It says the rain will clear to sunshine and passing heavy showers by early afternoon, but there is the risk of hail and isolated thunderstorms later, especially across Atlantic counties. Highest temperatures 11 to 14 degrees Celsius. Strong southerly winds will veer southwest later. Cool and rather windy on Saturday night with clear spells and showers, some of the showers heavy and prolonged once again across Atlantic counties with the ongoing risk of thunderstorms. Lowest temperatures of 5 to 8 degrees Celsius, in fresh to strong southwest winds.

The same Steering Low will feed in blustery thundery showers on Sunday with a risk of hail, most frequent across Atlantic counties The best of any sunshine is expected in eastern counties, where it will be driest. Highest temperatures of 9 to 12 degrees, in fresh west to southwest winds. Some further blustery showers are expected Sunday night, mainly in the west. Lowest temperatures of 5 to 7 degrees Celsius.

What happens to a hurricane structurally when it transitions?

When a hurricane or tropical system moves up into the higher latitudes, the strong upper level winds (jet stream) cause the storm to speed up.

At the same time, the increase in the wind speed in the upper air almost literally chops off the upper part of the hurricane and sweeps it away

The hurricane is also starting to move over cooler water so its fuel source is depleting from below.

Basically the hurricane structure gets destroyed from above and below.

While the maximum wind often decreases, the wind field spreads out, so the overall impact of high winds actually increases due to the expansion of the wind field. So even though the winds may not be quite as strong as they were when the system was a hurricane, there is a wider area of potential for damage due to high winds owing to the expanded wind field.