Tullamore shopfront should not be 'protected' 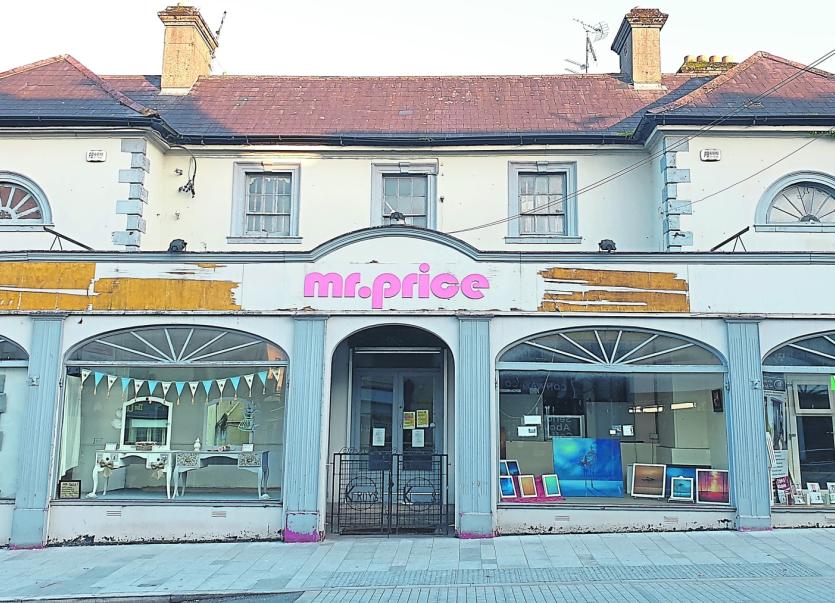 Tullamore shopfront should not be 'protected'

THE former Kilroy's store on High Street, which now has the Mr Price shop to its rear, has been described as one of the most sophisticated 18th century structures in Tullamore.

Architect and town planner Fergal McCabe has called for the building's shopfront, which was added in 1959, to be removed from its protected structure designation.

In a submission to Offaly County Council, Mr McCabe calls for a detailed survey of the building to be carried out so that its appraisal in the protected structures record can be updated.

He says it dates from about 1730 and was built by Nicholas Crawford, the master of the local military barracks.

It was later used as the office of the Charleville Estate before becoming Kilroy's electrical shop and store in the late 1950s.

He said both are five-bay stone structures with projecting end bays, a half basement and “a piano nobile approached by stone staircase”.

“The main difference is that the Tullamore building has a visible hipped roof supported on a fine carved stone cornice whereas Belvedere is finished with a simpler running cornice. Arguable, Tullamore is the finer building,” said Mr McCabe.

Both buildings use the same “unusual feature” of matching Venetian windows surmounted by a demi-lunette or Diocletian window.

“Original photographs show the building set back from the street to match the building line of its neighbours and with a sweeping staircase rising to a well-designed Gibbesian door case.”

He said the door case is topped by a pediment over a pulvinated frieze which is more elaborate than that at Belvedere.

“It is presumed that these original architectural features remain behind the masking shop front.”

He said the similarity to Belvedere has been commented on by the “eminent architectural historian” Dr John O'Connell and its attribution to Castle has been endorsed by Andrew Tierney.

“Along with the Market House in O'Connor Square, this building is in architectural terms, the most sophisticated 18c structure in Tullamore,” said Mr McCabe.

“It would appear to be unoccupied and given its age, its future must be in doubt. It should be the subject of a more intensive appraisal based on a full architectural survey which would establish the extent of the original structure and its condition with a view to arresting any further deterioration.

“Any steps necessary to ensure its preservation and conservation should then be taken and if necessary, the powers of inspection and protection available to the Council under Part 4 of the Planning and Development Act 2000 used.

Mr McCabe also said the integrity of this important building was “regrettably degraded” by the erection in 1959 of the single storey shopfront “which obscured the lower part of the facade and its entry steps”.

He said the shopfront is executed in an “illiterate mock Georgian style” of four squashed arch openings with a fasccia over and “bears no architectural or functional relationship” in design, scale or materials to the 1730 building behind it.

“This structure is of no intrinsic architectural merit and its degradation of the historic building and transgression of the building line of the street, would be unthinkable today”.

He also noted the permanently locked security gates on the shopfront and its use for displays, saying it “effectively presents a dead frontage to the street”.

“It is an inappropriate anomaly whose removal would reveal the original frontage of the important building behind and restore the civic character of High Street.”

He says the shopfront cannot be considered worthy of inclusion in the protected structure record along with the 1730 building and called for its removal from the record “lest it prove an impediment to any future proposal to restore the original building”.

“I would ask therefore that pending an architectural survey leading to a more thorough description and appraisal, the present entry in the RPS (Record of Protected Structures) should stand but that the following sentence be deleted: 'The 1959 shop front is appealing with its arcaded timber pilasters and recessed round headed doorway with double wrought iron security gates' and that the following sentence be added: 'For the avoidance of doubt, the 1959 shop front does not form part of the Protected Structure'.