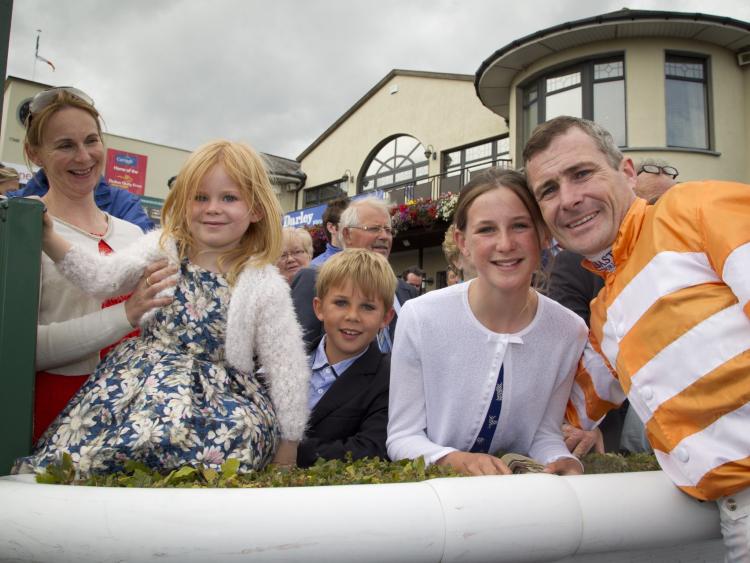 Pat with his wife Frances and children Hannah, Paddy and Sarah after winning the Darley Irish Oaks with Covert Love at the Curragh, July 2017 Photo: Patrick McCann

The funeral of nine-time champion jockey and Offaly man Pat Smullen has taken place in St. Peter's Church in Rhode. The small funeral mass heard about Pat's glittering career in the saddle as well as his quiet family life with his wife Frances and their children Hannah, Paddy and Sarah.

Pat's coffin, draped in the silks from his 2016 Epsom Derby win and both his Irish Derby victories, was brought to the altar as a stunning rendition of Amazing Grace filled the small church.

The funeral was attended by the aide-de-camp of both President Michael D Higgins and Taoiseach Micheal Martin.

Fr Greg Corcoran said: "We gather on this sad day to bid farewell to Pat. It is a very sad occasion for his family, friends, our parish and the wider racing community in Ireland."

A racing helmet, a saddle, a model tractor and a coffee mug were presented as gifts in honour of the things Pat loved most, a representation of his life in sport and at home on his farm in Rhode.

Fr Corcoran spoke glowingly about Pat: "In the tributes I've seen in recent days, you read about his career and many achievements, but you also get a sense of him being a very nice person as well.

READ ALSO: 'I interviewed Pat Smullen once' - He was a fierce competitor right to the end

"He was always courteous and gracious; he always thanked people. I've seen words written from starting stall teams, carpark attendants and tea ladies and they all reflect just how gracious and humble he was to everyone. He always helped young jockeys as well. All of their lives were richer for having known him. He had time for everyone."

In her eulogy for her late husband, Frances Crowley said: "My heart is broken; broken for myself as I've lost my best friend, my soulmate."

"My heart is broken too for our children, Paddy, Hannah and Sarah." She said they should know just how proud their father was of the people they have become.

She said her heart was also broken for Pat's mother Mary, who is going through the "unbearable pain of losing her son 15 years after losing her husband."

"They are reunited now," she added, "they both loved the farm and I know they are both there now and will be always with us."

Speaking about the many messages of support Pat has received in the last few weeks and months, Frances said people should know "he saw them all, even if he didn't reply."

Frances revealed her heartbreak for the entire community of Rhode, "a village that has lost its hero."

"Strong. Brave. Tough. Fighter. Winner. These were all words used to describe Pat, and here are a few more," Frances said.

"Insecure. Scared. Vulnerable. Sad - He was only human and a human body can only take so much. But his spirit never gave up; in the end, it was his body that gave in," his wife told those gathered.

She also spoke to the many cancer sufferers around the world who had been following Pat's battle from the altar. For them, she had a message of resilience.

Frances thanked the medical team in St. Vincent's Hospital for the great care they gave him in the final six weeks of his life. "As I left Pat in the hospital to go home every night, I knew he would be treated with dignity. I can't thank them enough for the care they gave."

She spoke too of how she saw that medical team become visibly disheartened as Pat's condition deteriorated in his final weeks. "Pat noticed too," she said.

"You always did your best, Pat. Always," Frances concluded to applause in the church.