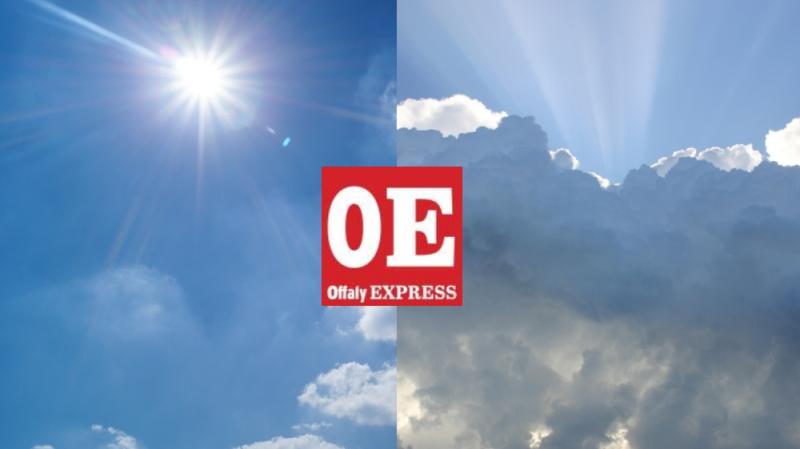 The weather forecast for Ireland for the coming week from Met Eireann is for it to be warm for the week with some showers but becoming more unsettled towards the end of the week and into the weekend.

The weather forecast for Ireland for Monday from Met Eireann is for it be warm again with a good deal of cloud around, although some hazy sunshine will occur at times. Much of the country will stay dry, however heavy showers and thunderstorms will affect parts of Leinster and Ulster through the day. The showers most frequent in coastal counties along the east coast, with intense thundery downpours likely along with hail. Highest temperatures of 18 to 24 degrees, warmest over Munster. Winds will be light northeasterly or variable in direction but will be gusty in and around showers.

Some showers may continue for a time on Monday night along eastern and northeastern coasts but generally it will be a dry, mild and humid night with some patchy mist developing. Lowest temperatures of 11 to 15 degrees in light northerly or variable winds.

The weather forecast for Ireland for Tuesday from Met Eireann is for it to be mostly cloudy to start the morning but good sunny spells will develop in the south before spreading north, but remaining mostly cloudy over Ulster with some showers there during the day with a risk of some heavy bursts. Continuing warm with highest temperatures of 19 to 24 degrees but slightly cooler on some coasts in light northwesterly or variable breezes.

Any remaining showers will clear leaving a dry night on Tuesday night with good clear spells. Lowest temperatures of 10 to 13 degrees in light variable breezes.

The weather forecast for Ireland for Wednesday from Met Eireann is for a dry and bright start for most but becoming cloudier during the afternoon with isolated showers. Warm again, with highest temperatures of 18 to 23 degrees in light variable breezes. Mild overnight with temperatures of 11 to 14 degrees. Some showery conditions may develop in the southeast towards dawn.

Here is our 7 day Atlantic Chart, showing the pressure and precipitation forecast in 6 hour intervals.https://t.co/9Giuj4CR5m

The weather forecast for Ireland for Thursday from Met Eireann currently says that there is a good deal of uncertainty but current indications suggest that after a mainly dry start to the day, there is the possibility of showers developing during the day and the potential for some thundery showers. Cooler than recent days with highest temperatures of 16 to 20 degrees in light to moderate northerly breezes.

For Friday and the weekend, it is expected become more unsettled with showers. Highest temperatures will range from high teens to low 20s.