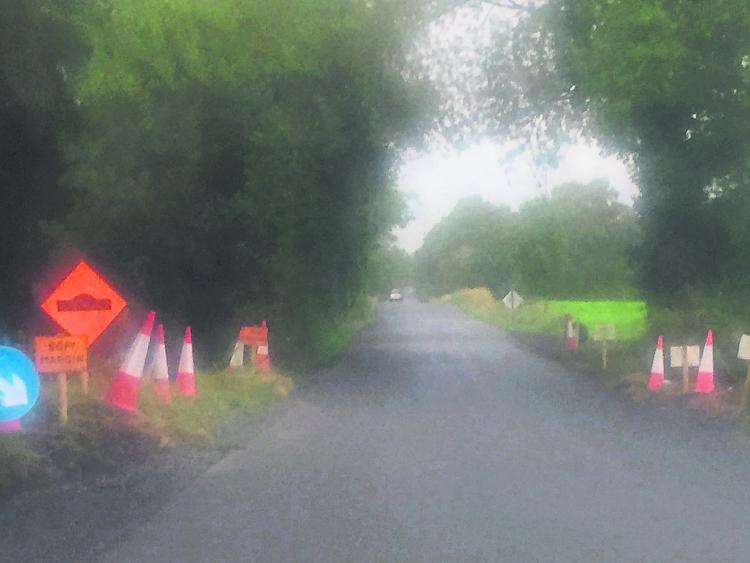 SOLVING the problem of Offaly's sinking peat-based roads will cost at least €2,000 per metre, it has been revealed.

A meeting of the County Council was told that 32% of the land in Offaly is peat and a survey is now being carried out to determine the feasibility of upgrading stretches of regional road built on the soft foundation.

For decades councillors have voiced motorists' complaints about the condition of roads in rural areas of the county. Jean Ryan, engineer, said that of the 2,192km of road length in Offaly, 393km is classed as regional road, 183km in the Birr Area, 84km in Tullamore and 126km in Edenderry.

Each year Offaly spends its full grant allocation on regional and county roads and this year it is €16m.

“The roads are prioritised depending on the level of traffic on the road and detailed condition rating surveys,” said Ms Ryan.

The peat-based roads require ongoing maintenance, she explained. In 2018 for example, a drought was followed by Storm Emma and deep fissures opened up which required reactive maintenance.

National roads only require maintenance every 10 to 20 years. “With roads over peat we are having to return to the same area every two to five years,” said Ms Ryan.

The challenge facing the council has been illustrated by work carried out on a 750m stretch of the N62 road between Cloghan and Ferbane in 2016.

The peat under the road was six metres deep in places. It was removed, put on Bord na Mona land and replaced with granular fill.

The project was a success and the road did not need constant maintenance since but it cost €1.5m before VAT. Research is now ongoing on peat depths on other roads and at the July meeting of the County Council Ms Ryan presented three examples of the results.

On the R444 between Shannonbridge and Clonmacnoise, seen as a key artery for tourism traffic, 3.6km was surveyed and about 32% of that length was found to have underlying peat of between three and five metres.

On another 18% of the road, the peat depth was up to 10 metres but Ms Ryan said the average depth found across all roads examined was between three and five metres.

Another road, the R436 between Ferbane and Clara, does not present as big a problem because no peat deeper than five metres was found. 58% of the road has between three and five metres of peat underneath.

On the R402 between Ballina Cross and Edenderry, an 800m stretch was examined and 44% of it has peat of between three and five metres.

Councillors were told the studies are generating a “lot of data” because there will be 500 site investigation reports across the county.

On the back of information gathered the council has already received €100,000 for the Birr distributor road and funding will next be sought for the R444.

The engineer warned councillors: “It is an expensive business when we are dealing with peat.”

Responding to the report, Cllr John Leahy, Independent, said the council had been “pumping good money after bad” for years into the roads.

“It'd be an understatement to say that people are outraged to be paying their road tax,” said the Kilcormac councillor. He reckoned that on average motorists in affected areas were paying €600 a year for bushings and tyres.

In the previous two weeks alone he had reports from two people with burst tyres. Cllr Leahy also stressed that the research was being done on regional roads only and the county roads also needed to be dealt with.

Cllr Eamon Dooley recommended meetings with Bord na Mona because that company could assist not only with peat disposal, but with providing machinery and filling material.

The Ferbane Fianna Fail representative also urged the council to go ahead with work on the R436 first because it did not have as much peat underneath.

Other councillors highlighted issues with roads in their areas and Cllr Frank Moran, Fianna Fail, said he believed safety barriers would have to be placed on stretches of the road between Ballycumber and Moate where the verge was crumbling.

Offaly County Council will have to work with its Westmeath counterpart to carry out the work, said the Clara councillor.

His Fianna Fail colleague, Cllr Peter Ormond, asked if “any sort of plan” had been drawn up for the work and said at €2,000 a metre, it would be costly, especially for an important road like the R444 to Clonmacnoise.

“I don't think we'd get €7m straight off to do a road like that,” the Shinrone councillor remarked.

Cllr Eddie Fitzpatrick said the Edenderry area had no national roads at all and the regional and local roads were never satisfactory because the money was being stretched out every year.

Cllr Neil Feighery, Fine Gael, stressed that it was “going to be a challenge” to do the work and Offaly would need additional Government funding.

Another Fine Gael member, Cllr Noel Cribbin, reminded his colleagues that the money for the research, €175,000, had been allocated after a meeting in Edenderry with the “much maligned Minister Ross”.

Ms Ryan said specific improvement grant applications will be made this year for the R444, a road widening scheme in Edenderry and the Tullamore urban roads and cycle lanes project.

Then she will look at the results of the study and target other roads, such as the road on the county boundary at Edenderry, the R400 and the R402.

“Each year we will be making applications to the Department for specific schemes,” she said.

She said talks had already taken place with Bord na Mona in relation to work and she agreed with Cllr Dooley that involving the company had reduced costs previously.

Ms Ryan told Cllr Mark Hackett, Green Party, that it is unlikely the road between Edenderry and the M6 will be upgraded from regional to national route status.

Councillors have previously appealed for the status upgrade because the council does not have to foot the bill for the maintenance of national routes.