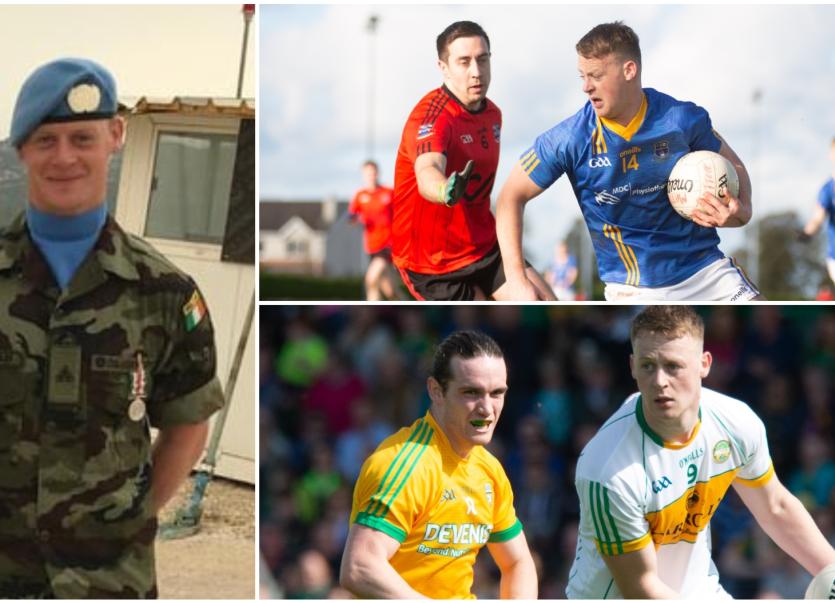 As he serves as a peacekeeper along the Blue line between Lebanon and Israel, Offaly football star Peter Cunningham is longing to pull on the blue and yellow of his beloved Bracknagh GAA Club in the Offaly club championship this year.

The 3-star private is currently serving on a peacekeeping mission with the Irish Defence Forces in South Lebanon.

He has been there since November and despite being due home on May 19, Peter remains on assignment due to the Covid-19 pandemic.

"We were due to return home on May 19 but due to the Covid-19, we are still in the country and waiting on confirmation on dates to travel home," he told us.

Despite the delay, Peter, who joined the army in 2016, describes his service in Lebanon as "a good experience" but "very different than being at home."

"The country [Lebanon] down south has really been hit hard by the recession and it shows around the villages in the south of the country. It's been a good and enjoyable experience to see these parts of the world and how people live in such hard times and bad conditions," the Bracknagh talisman explained.

The Irish Army is in Lebanon as part of the United Nations to support the Lebanese armed forces in keeping the peace along the blue line between Lebanon and Israel.

"Day-to-day jobs involve 24-hour duties or patrolling along the blue line to make sure no activity is happening," Peter said.

Discussing the impact of Covid-19 in Lebanon and on the work of the Irish peacekeepers, Peter said: "It's affected the whole world and we are in the same situation here. There were big changes to our day-to-day routines for our own personal health.

"Workers coming in and out of camp had to have temperature checks on every entry to camp, social distance plans had to be put in place around the camp to make sure everyone kept their distance for any situation where a crowd would have to gather, like getting meals or weapons."

Peter has also been in touch with family and friends at home in Offaly to keep up with the virus here. He was home for three weeks on leave in February but has been abroad since the pandemic really hit home in Ireland.

"I've been following everything at home. It's very easy with technology nowadays. I've been talking to family members and friends regularly and they've kept me up to date on how hard Ireland was affected by the virus and the country going into lockdown with a large number of people losing jobs.

"I don't think we as soldiers abroad realise how hard Ireland has been hit by the virus because our job day-to-day hasn't changed much over here except for taking extra precautions to make sure we had the correct PPE gear when leaving the camp."

Thankfully, Peter's camp has remained free of Covid-19 and he says that is down to "the high standards set in the camp to avoid it."

Looking toward the much-changed football landscape in 2020, Peter is very hopeful of an intercounty championship going ahead.

"I would like to see a knockout championship," he added.

"It would be something different and exciting. Every game could be your last game and it'd be a great chance for a team to shock the championship," Peter added on the possible make-up of an intercounty championship later this year.

Closer to home, Peter had high hopes for his ambitious home club in Bracknagh. Bracknagh were promoted to the senior grade after last year's championship but the village is not there to make up the numbers.

"I think Bracknagh will do well at the top table. The last number of years have been very enjoyable, we are after being very successful with a very young team and the only place to test and better ourselves is with the big teams in the championship. It's something the team is looking forward to this year and hopefully, we can have another great year."

Peter remains in touch with his club and county teammates, as well as with Offaly county boss, John Maughan.

"I've stayed in touch with the panel and all members in the group chats. I joined back up with the lads at the end of February when I was home for three weeks on my leave before I had to return. I would talk to John [Maughan] on a regular basis. He would always ring or text to see how I am keeping and to make sure everything is going well over here. We'd always keep in contact with just general conversations about how the country is, football and so on."

Cunningham is also looking after his body in Lebanon with delayed championships in his mind all the time.

"Training over here is different. We have a good gym here and can run around the camp so we're not fully restricted. It's just about being creative and trying to train the body as best as possible and in a way that will be beneficial in football terms so I'm not playing catch-up when I return home and am ready to go for championship. Luckily a big part of this job is personal fitness so you have plenty of time each day to train."

Peter Cunningham has been one of the most influential county players in Offaly in recent years, as well as being to the forefront of his club's rise through the ranks. He is a major part of John Maughan's plans for the senior panel as he eyes a late Autumn inter-county championship.