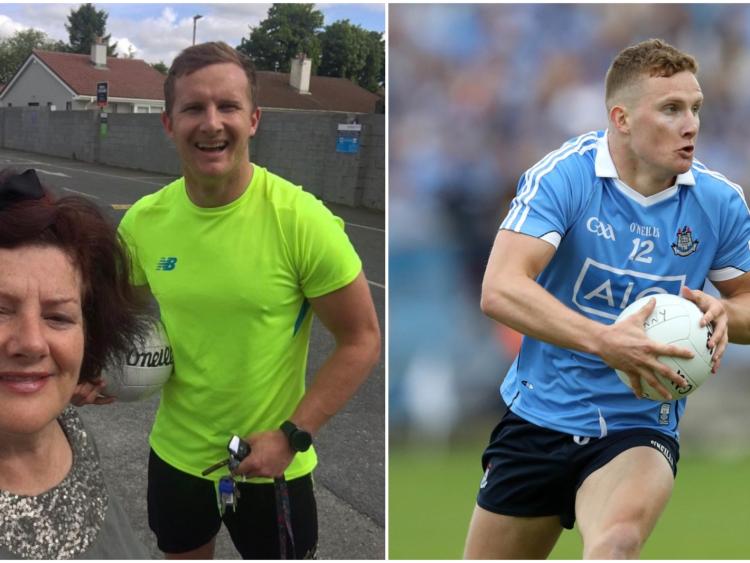 You would certainly be stretching your imagination to envisage him lining out for Offaly and being the same footballer that he is had the life path of his parents taken a different direction, but Dublin football folk hero Ciaran Kilkenny has very close and proud connections with the county.

His mother Mary was born in Kilcormac in the late 1950s and later lived in Screggan before her family moved to Portlaoise when she was in her mid-teens after her father got promotion in Bord na Mona. Her time in Offaly was comparatively brief but she retains cherished never to be forgotten memories of her childhood years in the county – she doesn’t have any family left in Offaly and now lives in the Castleknock area.

26-year-old Ciaran Kilkenny has been an absolutely pivotal figure on the fantastic Dublin side that won its fifth All-Ireland Senior Football Championship title in a row last year. A brilliant playmaker in the attack who also contributes frequent important scores, he has been a crucial cog in the all-conquering Dublin side.

The oldest of seven children of Jarlath and Patricia Corcoran, Mary lived in St Cormac’s Park for her first seven-eight years and she remembers having great fun playing games in the green in front of their houses, including: hop scotch, blind man bluff, tig etc.

She described the excitement of waiting for her father’s (Jarlath was also known as John) return from work with Bord na Mona in the evenings. “I waited patiently for my father’s return from work with Bord na Mona on his bycycle through the gap in the park where I ran to greet him and got a little jaunt on his crossbar home to the house. Simple pleasures.”

She still has friends in Kilcormac and keeps in contact with them. After Kilcormac, the family moved to Screggan when her parents purchased a small farm of 12 acres. Again her memories of this time are vivid and happy. Recalling that the land was her father’s first love, she stated: “The next seven, eight years were spent practically self sufficient on this little farm that my dad worked long and hard as well as keeping his job in Bord na Mona. My mum did all the rearing and keeping home, making clothes, baking, making butter.”

The family embraced the whole process of agricultural living. They had one cow and a couple of cattle and Mary remembers cutting turf, making hay, thinning turnips, planting potatoes and harvesting. She enjoyed milking the cow and making butter and recalls that they had “lovely neighbours” and loads of children to play with.

“Of all my memories, Screggan stands out as one of my best,” she said. She went to Mucklagh National School where she played in their sports. She particularly remembers playing camogie there and the divided skirt they wore. “Such fun,” she smiled, adding that Kelly’s was their local shop “where all the traditions prevailed”. Again, she describes an idyllic and fun filled childhood as she remembered biscuits in tin boxes, meat slices etc. Christmas was a special time and Mary recalled the great anticipation of waiting for their Christmas box, the lemon sweets and the chocolates wrapped in a ribbon.

She went to secondary school in Tullamore, where she was delighted to resurrect old friendships with pals from Kilcormac on the bus in. “Of course, all love stories began on the bus but hey, that’s another story,” she joked.

Her time in Offaly ended at intermediate certificate as Jarlath got promoted to Cuil na Mona, outside Portlaoise, they sold their Screggan land and moved to a new house two miles outside the Laois capital. Her mother Patricia still lives in Portlaoise – Patricia was a Corrigan from Kildalkey in Meath and the famous chef Richard Corrigan is a first cousin of Mary.

Her life path eventually took her to Dublin, marriage to John Kilkenny, mother of a family of three, one of them one of the best footballers of the modern era, a genius with the ball in hand and a man who looks set to go down as one of the greats of all time, and two daughters.

Ciaran Kilkenny’s promise shone through from underage ranks and he was also a very talented hurler, winning Leinster minor hurling and football medals with Dublin in 2011 – they lost both All-Ireland finals. He won an All-Ireland U-21 football medal with Dublin in 2012, scoring four points as they beat Roscommon in the final in O’Connor Park. He made his Dublin senior football debut that year and had his first start in the 2012 All-Ireland semi-final defeat by Mayo.

Prior to that, he had spent four months in Melbourne, trying out a career with Hawthorn in the Australian Football League but returned home to concentrate on his Dublin ambitions. His services were also sought by Dublin senior hurlers but like most people with the ability to represent them in football, he opted for the big ball code.

He missed most of 2014 after tearing his anterior cruciate ligament in a National Football League game against Kildare and has been an ever present on the Dublin side since his recovery. While Mayo and Kerry have been very close to them and definitely could have beaten them, they have been near unstoppable as they completed football’s holy grail, the five in a row, from 2015 to 2019.

The holder of six All-Ireland senior football, seven Leinster, five National Football League medals and three All-Stars, Kilkenny is only entering his footballing prime and it is frightening to think about what he could yet achieve.

Kilkenny has also been the main man as Castleknock GAA Club have embarked on a remarkable success story, emerging as genuine Dublin senior football contenders. One of Dublin’s newest clubs, it was founded just in 1998 to cater for the Castleknock, Carpetstown, Clonsilla area of Dublin 15 – previously St Brigid’s GAA Club catered for players from these areas and there has been fair rivalry between the two clubs.

Initially competing in the tenth tier of Dublin football, Castleknock has made a meteoric rise up the ranks. It has a vastly populated catchment area, reflected by its membership of over 1500, and like most clubs in Dublin, they have done an excellent job promoting gaelic games. Ciaran Kilkenny began participating in their juvenile coaching from the start in 1998 and he is the jewel in their crown but they are far from a one man team.

They won the Dublin Junior Football Championship in 2012, intermediate in 2014 and were beaten by St Vincent’s in the 2016 Senior Football Championship final. They will be serious contenders this year if a championship is run – apart from Kilkenny, Graham Hannigan and Shane Boland have played O’Byrne Cup for Dublin, Adam Swan has been a minor star for them for the past two years and they also have Westmeath and former Kilbeggan player Tommy McDaniels, Limerick’s star forward Seamus O’Carroll and Roscommon panelist, Gerard McDermottroe.

There has also been strong Offaly connections with Castleknock GAA Club. Ballinagar native, Donal Cunningham has been a club stalwart and activist almost from the start. A long time resident in Castleknock, he transferred from Ballinagar in 1999 and played in their first league game while Killeigh man, Paul Mulvehill, Ballinagar’s Cathal Daly, Tullamore’s Briain Fagan, Kinnitty’s Martin Delaney and Cappincur’s David Carroll have played at various levels for the club – Mulvehill, a former Offaly
footballer in the 1990s and Daly, not to be mixed up with his namesake and Leinster championship, National Football League and All-Star winner from Tullamore, were the joint captains as they won that crucial breakthrough junior football title in 2012.