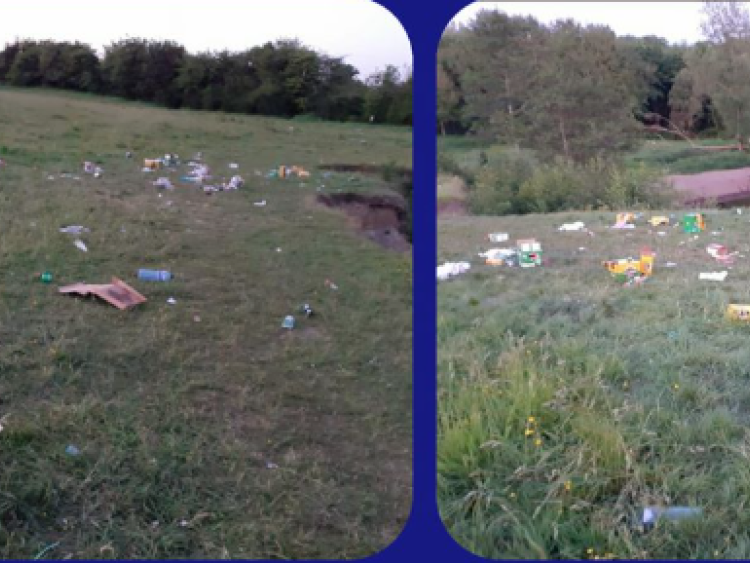 One councillor has expressed anger over a "lack of respect" shown to a local beauty spot in Birr after gardaí moved on gatherings of youths drinking in the area.

A group of 80 young people gathered on the banks of the Camcor River at Sandymouth last weekend as the country basked in glorious weather. After being moved on, a large consignment of rubbish, including beer bottles, cans and packaging was left behind.

It was eventual cleaned up by local residents and volunteers.

Reacting to the situation last weekend, Cllr John Carroll told the Offaly Express: "Sandymount has historically been the place where people gather when we get the odd burst of summer weather, it is the place where older generations will say they learnt to swim before we had a local swimming pool, which unfortunately is still closed in compliance with Covid-19 regulations.

"It was understandable while not to be condoned that people would make their way to to this 'swim area' with schools closed and no alternative recreational facilities, but what is annoying and frustrating is the lack of respect shown by some of the visitors in not taking home their rubbish."

He said littering in this way continues to be a problem around the Offaly countryside, an issue he wants tackled.

"There continues to be a problem with people littering, some leaving litter around our bottle banks, others discarding wrappers from their cars as they leave town and others deliberately driving to secluded beauty spots to dispose of household waste when we have a Civic Amenity site in Syngefield in Birr where your household waste can be disposed of at very low cost"

"I think we should be positive and recognise how the vast majority of our citizens have complied with the lockdown for well over two months, some with families in very confined spaces. It has not been easy so some understanding is required.

"I would like to compliment those who went voluntarily to clean up the area. I am sure they recognise this wonderful facility a stones throw from the Town Centre, only accessible to the community because of the generosity of a private landholder.

"I would appeal to all those who use this facility to respect it in future by leaving nothing behind them except their footprint. It has been an experience for numerous children, teens and families over the years, one of the few amenities that has remained free, so protect it by respecting it for future generations.