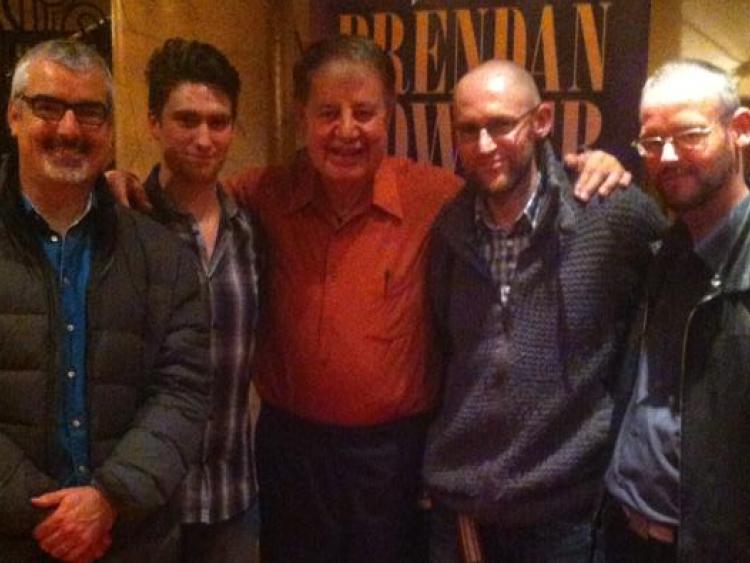 When the news broke of Brendan Bowyer's passing in Las Vegas last Friday, the ripple of sorrow it sent through Irish entertainment was immense and heartfelt. The Waterford man, one of Ireland's greatest ever showmen, was also one of the most genuine gentlemen ever to set foot on a stage. His loss will be great, not simply for his many fans worldwide, but for all who ever had the pleasure of knowing or working with him along the way.

For members of the midland's spoken word and poetry collective, the TULLAMORE RHYMERS' CLUB, the news was tinged with a somewhat personal sense of sadness with the group having opened the show for Bowyer when he performed at the Bridge House Hotel in Tullamore back in 2014.

Reflecting on that October evening over the weekend, members of the Rhymers Club recalled the once in a lifetime honour of opening for a larger than life figure - in every way - who counted Elvis, Frank Sinatra, and the Beatles among his fans.

"It was a privilege to observe from the wings both Brendan's stagecraft, and his humility when interacting with his fans," according to Richard Brennan, who continued, "Like many of my generation, I had almost dismissed Brendan Bowyer as being music for my parents! But around the time of that Bridge House gig, I did a bit of research and realised what a trailblazer he was in Irish rock 'n' roll. To have been a part of one of his shows is something I'll always look back on fondly and proudly."

Banagher born poet Thomas Carty remembered how evident Bowyer's passion for music remained, even in his later years. "His passion was remarkable, and very evident in how he went about everything he did. He showed the best of the music business, I think. And as an entertainer, of course, we - Ireland as a whole - were so lucky to have him. I definitely look back on that night, and getting to open the show for Brendan Bowyer, as one of the high moments of my own personal time being part of the Tullamore Rhymers' Club."

For James Delaney of Kinnity, the Hucklebuck singer may have been from a generation of performers before him, but watching Bowyer in action that night was an eye-opener.

"I can still remember the power of his voice, and being taken aback almost, at how strong it was. Maybe I was thinking that because he was a man who was a certain age at the time, that would show in his voice. But I couldn't have been more wrong, because it didn't. Not even a bit. Even at that age, I was so impressed with the power of his pipes, shall we say! And that's something that has honestly stayed with me until this very day. And I suppose with this very day being such a sad one now, that's a brilliant memory to be able to look back on."

Lusmagh native Anthony Sullivan, who also interviewed Bowyer ahead of that show in 2014, also looks back with fondness on his experience of meeting the Royal Showband frontman. "Brendan was everything you would expect a legend to be. Everything you hope a legend would be, in fact. But first and foremost, he was a gentleman. And that shone through in everything he did, whether he was on-stage or off.

"Whether it was during an interview, or just happening to meet someone for a few moments in a hotel lobby. He was always just Brendan. He never acted like he was a star. But at the same time, everyone who met him knew they had just met a star, ya know. He just had that charisma about him. He was a very special entertainer, but also a very special person. May he rest in peace."