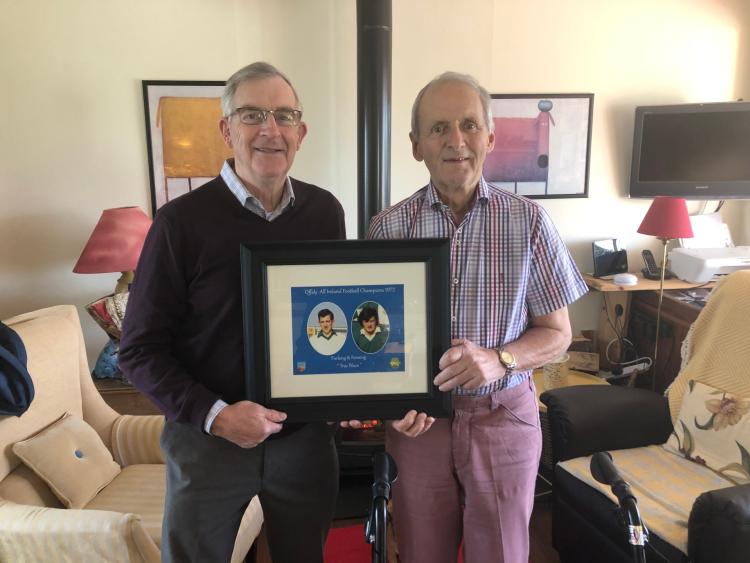 He first came to national and local prominence for his GAA exploits. A sub on the Offaly team that won the All-Ireland Senior Football Championship in 1971, he was a starter on the half-forward line in 1972 and when his speculative long distance punt found the net in the second half of the replay against Kerry, it ignited Offaly’s victory charge as they won by 1-19 to 0-13.

He was an excellent hard-working forward and he had a great engine. He was not a natural scorer but his contribution to that great era in the 1970s was crucial as his work rate and selfishness created so many openings for the scorers beside and inside him.

He was an excellent ball carrier and he was very much aware of his own footballing strengths and weaknesses. During an era when football was teak tough, he was brave and fearless, well able to take belts and get on with it. And he did get crucial scores. That 1972 strike was one while his goal against St Carthage’s in the 1973 Offaly Senior Football Championship final was the difference between them and his beloved Tullamore – his passion for Tullamore GAA Club was immense and he was always very proud of their achievements.

He won Leinster U-21 football medals with Offaly in 1968, when they went on to lose to Derry in the All-Ireland final, and 1971 while he won a Railway Cup medal with Leinster in 1974.

He made his Offaly senior debut as a sub in the 1970 championship win over Westmeath and went on to play 91 championship and league games between then and 1980 when the All-Ireland semi-final defeat by Kerry wound down his career. 84 of those games were as a starter and he was a very consistent performer, who always gave his all.

There were misses and regrets in his career. He was on the half-forward line early in 1971, seemed to have his place nailed down and started in the Leinster championship win over Longford but then lost his place after going on holidays and only came on as a sub in the All-Ireland semi-final and final win over Cork and Galway.

From then until his retirement, he was rarely off the team and he was one of the 1971/1972 heroes that stayed on for the second coming under Eugene McGee after he was appointed in late 1976. While Martin Furlong, Sean Lowry and Seamus Darby remained to win All Ireland medals in 1982, players such as Fenning, Eugene Mulligan, Kevin Kilmurray and Mick Wright played significant roles as an outstanding new array of talent, Matt Connor, Gerry Carroll, Johnny Mooney et-al were bedded in under McGee – there were near misses as they ran Dublin close in 1978 and 1979 but Fenning, Mulligan, Kilmurray and Wright were still there as the Dubs were finally beaten in the 1980 Leinster final and their importance to that success can’t be overstated.

Fenning had the option of staying on for 1981 as Offaly’s revival gathered real momentum but his career ended after a difference of opinion with Eugene McGee sometime after the end of the 1980 campaign and he opted out – he believed that he could still have been there in 1982 had he went back but it was not to be as Offaly captured a famous All-Ireland.

He gave sterling service to Tullamore GAA Club and was their president. In 1977, he was a star player as Tullamore won the Senior Football Championship and a key figure on the management as they completed a very rare treble by winning the Minor and U-21 Football Championships. He managed underage teams as well as their senior side in the 1970s and 1980s but resisted the urge to take a hands-on roll from the 1990s on, rejecting several approaches from his own club and other ones as well as county teams.

There was a lot more to Paddy Fenning than the GAA and he made a huge contribution to life in a variety of spheres. He was a brilliant salesman with Spollen/Kilsaran Concrete and later Tullamore Hardware, a meticulous professional, a great generator of business and collector of accounts with the ability to spot trouble and potential bad debts from a country mile away.

He was a fundraising driving force behind a number of big developments in Tullamore, including a CAT scan for the hospital, swimming pool and arts centre. In particular, his fundraising for the Tullamore Swimming Pool and Leisure Centre helped drive that much delayed and often questioned project over the finish line.

He organised several other charitable events and he helped clear the large Tullamore GAA Club O'Brien Park/Social Centre debt in the 1980s when he organised a famous tour to America in 1985. He published an excellent Offaly GAA football pictorial history in 1993 and was instrumental in a Tullamore GAA pictorial history a couple of years ago when a big club reunion was arranged to co-incide with the launch – he rarely did things in half measures.

He organised fundraising events for Clara man, Michael Nestor after he was disabled following a work accident in the 1990s and he ran a golf classic for his Offaly team mate, Mick Wright as he successfully fought leukaemia in the 2000s, getting a special transplant in Spain. He was involved in several other charitable causes over the years and his life’s work was recognised when he was selected as the Offaly person of the year in 2012.

He had a great sense of Offaly football history, and organised a holiday abroad for 1971/1972 teammates for several years from 1996 onwards – started as a silver jubilee celebration for the 1971 All-Ireland champions in 1996, it proved a hugely memorable holiday for the regular participants as they travelled each September/October to Portugal, Spain or the Canaries. A charismatic personable man, he was a devoted husband to Kathryn and father to Barry and Amy. He was excellent company and a great conversationalist. He was also a keen and capable golfer before drifting away from that game several years ago.

Diagnosed with motor neuron disease last year, he had set the wheels in motion for a major fundraiser for them and the homeless in Offaly for June 7 but the coronavirus crisis forced its postponement. He also organised several reunions of the 1971 and 1972 squads as well as GAA millennium celebrations in 2000.

He arranged a big reunion to coincide with the opening of the Furlong Bar in the Tullamore Court Hotel in the late 1990s – the Court Hotel was partly built on the site of the former Furlong home in O’Moore Street, where Martin, Tom, Mick and John Furlong were reared.

A terrific organiser, a man with infectious drive and passion, the ability to inspire others and a one man fundraising machine, he worked best as the main leader of events with back up from committee members and helpers. He had such drive and news of his illness in the middle of last year and the inevitability of his death was a tremendous shock to the multitudes who liked and admired him.

The launch of the big fundraiser earlier this year was a deeply emotional night, a final goodbye of sorts as he greeted throngs of colleagues, friends and well-wishers. He had a fine sense of humour and relished banter and fun, particularly over old GAA incidents and stories. He was a strong character and he had his own way of doing things. It meant that he could fall out with people while organising events but he was a fundraising, an organisational giant and almost everything he touched, turned to gold in this sphere.

News of his illness was a huge shock as he lived a clean lifestyle, eating well and drinking in moderation. Just a month short of his 70th birthday, he accepted news of his illness with courage and strength, immediately setting about organising his final fundraising event.

It is sad that his death should take place at this uncertain time of funeral restrictions and so much else but his life and vast legacy will be celebrated appropriately in their own way by many people. He was a great man to go to funerals and he organised his 1971/1972 teammates for guards of honour at any funerals that involved them.