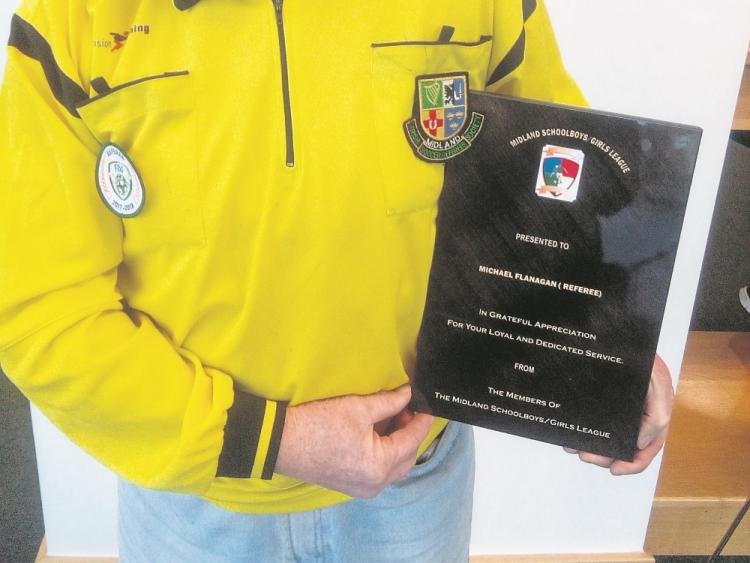 THE popular and evergreen Michael (Mickey) Flanagan recently celebrated over fifty years of remarkable service as a referee.

It is fair to say that most of the soccer playing citizens of Tullamore and nearby were at one stage or another on the receiving end of a shrill from his whistle or a stern but fair lecture as to our conduct on the pitch.

Michael’s start in the game came slightly by accident as he was asked to officiate in a match at the pitch in Charleville, despite not being registered with the FAI at the time. Now 72 years of age, he was 20 at the time and it was the start of a remarkable refereeing career - he only blew the final whistle on it in 2018. 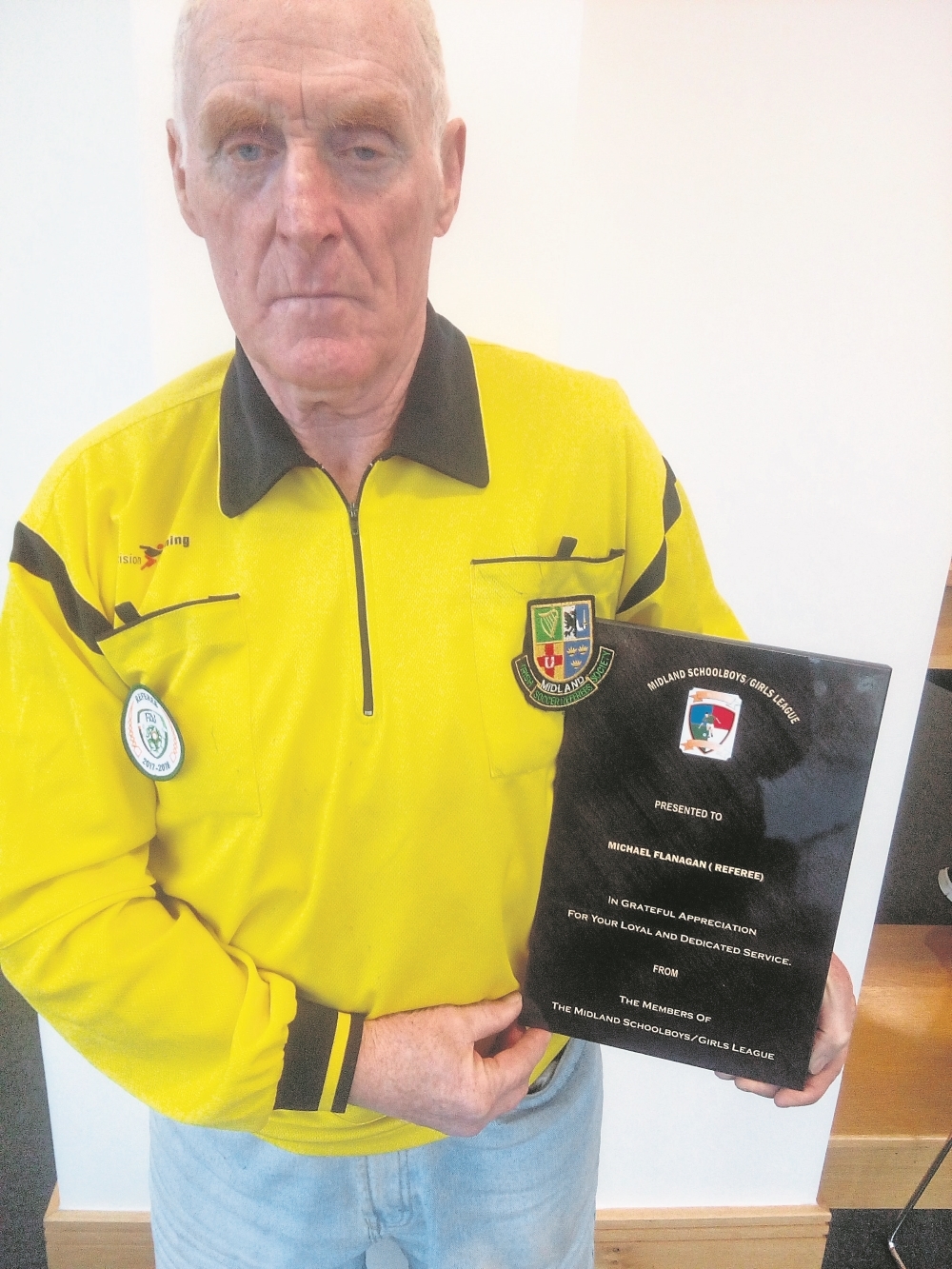 Knowing the man well and always noting his meticulous preparations before games. Michael was confident that he could complete the task, as he was encouraged to do so, especially by Leinster junior soccer official Kevin Byrne, who advised Mickey about what documentation was required and of how to obtain them. Kevin also advised how to fill in the forms and greatly encouraged Mickey to becoming more involved in refereeing.

Mickey also credits two other men, John Stacey from Athlone and Willie Bradley from Sligo who was a senior referee inspector then with the FAI. He regards these three ‘wise men’ as being responsible for providing him with the initial assistance required to becoming a bona fida referee and enforcing the rules of the game in his official capacity as a qualified referee.

“You only get out what you put into it” is the motto Mickey adopted from his early years as a referee as he began to travel around officiating at games. Mickey recalled to me how he overcame a lack of his own transport by thumbing a lift as far away as Cavan, Mullingar, Birr, Edenderry and Athlone, where I am sure those who carried him to his destination knew of  him as “the ref”.

He vividly described to me, his journey by bicycle to a match where he was officiating in Clonbullogue, on a remarkable warm and humid day, where the round trip was the best part of forty miles, and this was on top of running around for over ninety minutes too. Mickey always kept himself in decent physical shape, again, sticking to principles of preparing properly for the task ahead. He told me that when officiating, he had a duty to the players to be able to keep up with the play and be in the perfect position to make the right calls in relation to what was a foul and what was not. Mickey also served as a linesman on several occasions in the Leinster Senior League and greatly learned from this experience the ‘offside’ rule, with a different perspective from being involved with the general play.

Mickey’s career saw him officiate in the old Leinster Junior League and the Offaly Schoolboys League, right through to the Midland Schoolboys/Girls League (1996-2018), and what gives him so much pleasure still is that so many of those players continue to play soccer, and always greet him in the street or in the shops. This shows how highly respected and well-liked Mickey remains and he credits the parents of these kids as bringing them up responsibly to respect people and the rules of the game that they played. It was a pet hate of Mickey’s and a height of frustration too when a player would backchat to him or refuse to listen to when he was explaining the reasons behind his decisions.

Mickey was also greatly in demand to officiate in games involving the Garda, local schools and several local charities, which he enjoyed immensely. Although the games were mostly friendlies, he still prepared as if they were important league games. By now his reputation as an efficient referee, saw him in greater demand especially throughout the midlands, and he was asked to officiate for the Bord na Mona Leagues at Shannonbridge, which were extremely competitive affairs. “All games are equally important,” he said, and it was his responsibility to ensure that all players were wearing shin guards as required, to limit any possible injuries.

Perhaps the tournament that gave Mickey the most pleasure to officiate at was the Paul Mitchell Memorial, held in Kilcormac annually, a blitz style soccer event completed in one day. In his own words, “it was a privilege to do this event”, for which he received a plaque every year in the early years of this event. Eventually, the laws changed and a referee had to receive a monetary payment, but Mickey always regarded himself as “not a money man” and would have done this event for nothing. He was greatly appreciative of all the assistance he received in this event as others would step in and allow Mickey to get a bite to eat – the tournament would start in the morning and finish up in the evening. He speaks fondly about this event and it takes pride of place in all of the tournaments he was involved with.

I asked Mickey to describe his most troublesome match or incident that he officiated over. Without naming where it occurred or the clubs involved, he briefly explained what had happened with an incident involving a keeper leaving his line with his feet raised and colliding dangerously with a forward. Before he could deal with what happened, he received abusive language that totally shocked him and he instantly brandished a red card and had the player removed from the area before sending the goalkeeper off too.

Afterwards in his dressing room, the player who had being removed from the area, entered the room and proceeded to throw the match fee on the ground as a gesture of a total lack of respect for Mickey. Disgusted, he refused to pick up the money and was preparing to leave when the player re-entered and picked up the money and handed it to him. He describes this as the worst example of abuse he received verbally and afterwards, and his match report mentioned both incidents in great detail.

Mickey today remains a well-respected individual and his record as a referee speaks volumes for the preparation and attention to detail required to complete this difficult task of trying to not only keep twenty two players in check on the field but the passionate support in the dugouts and on the sideline too. To all of us who were lucky enough to have played in matches involving Mickey or just to know the man, we address him simply as ‘The Ref’.