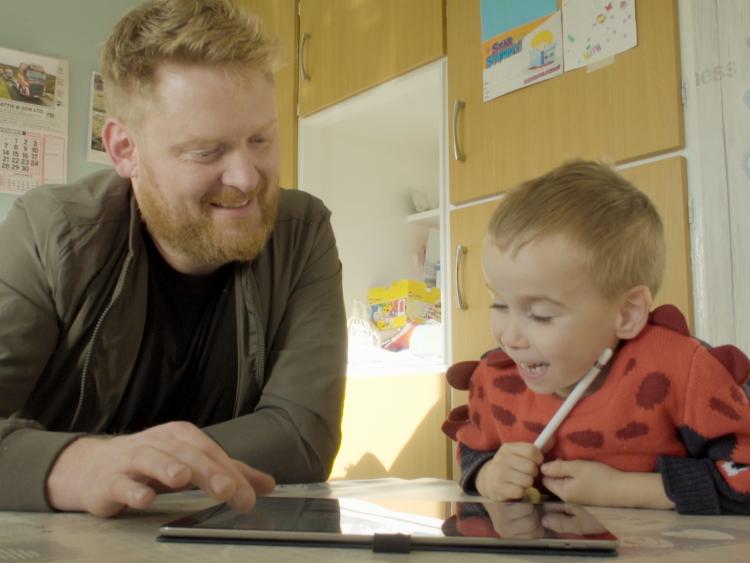 On the show, Birr native Trevor talks about one of his latest inventions for seven-year-old James Smyth who had both of his legs amputated as a result of Caudal Regression Syndrome, a rare condition affecting the spine. Their story features on BIG LIFE FIX, a new RTE series airing on Wednesday night.

Trevor, who has over 50 patents to his name, developed a number of world-first surgical devices and currently heads the Innovation Lab at Maynooth University.

Trevor created a Dino Kart for James and discusses his thought process:

“We didn’t want to give James something that would stigmatise him like another type of wheelchair. I guess we wanted to really empower him and bring out that little boy.”

“When you see his garden, it goes for hundreds of metres and it struck me that a seven-year-old boy (who was six at the time) should be able to run. While he could make it to the bottom of the garden, he would always have to call for help to bring him up. Apparently there are lots of thorns on the way so he hated that. Those were our biggest challenges of how do get him out into that garden so he can explore.

“The whole process was about a year. We spent a huge amount of time how he interacts with the world. He uses his hands an awful lot. He tried motorised cars and nothing seemed to work. An awful lot of observation was involved, talking to him, his family, his physiotherapist and then we started exploring ideas. Our constraint was, it couldn’t look like a disability toy. It had to be cool, it had to be dinosaurs (James is infatuated with dinosaurs) and it had to be something that other kids would want. Even my own kids, when they saw the final design they were jealous. They didn’t want to give it away.”

Trevor paints a visual of what the Dino Kart looks like: “It looks like a dinosaur; it’s got a very powerful motor. James’s garden is on a slope so we wanted him to be able to go up and down that very easily. And it has got a big comfy seat – comfort was very important to James but it has got seatbelt, which he likes to feel secure.

"It has these amazing sounds built into it. Because James is quite small, is the size of a one-year-old when we first met him, we wanted to give him a big expression. So, it has these huge dinosaur roars. So you can hear him from the end of his garden and he is a cheeky little guy and loves frightening people so he will sneak up behind him them.”

James’s mum, Joanne Smyth also featured on this morning's show and she talks about what the Dino Kart and what it means for James:

“It’s everything that we were kind of looking for. It is a toy, it looks cool, its dinosaurs. I mean it is like you would see any other seven-year-old sitting on or playing on.

“I can’t even put a word on it, how much it means. It’s a means of giving James some independence. But to James, it is the difference between being a child and not being a child."

Trevor and James feature in a new RTE TV series, BIG LIFE FIX, which challenges a group of leading designers, engineers,
computer programmers and technology experts to create inventions that will transform people’s lives. Filmed over the course of a full year, the group uses cutting edge science and technology to build practical solutions for those who need their help.

Based at TOG, a facility for makers in the Blackpitts area of Dublin city, the team harnesses the power of science to create tailor-made inventions for individuals and families. Between them, they can build everything from space satellites to life-saving medical devices and military hardware.

The episode featuring Trevor and James airs tonight, Wednesday, March 4, on RTE One at 9.30pm.