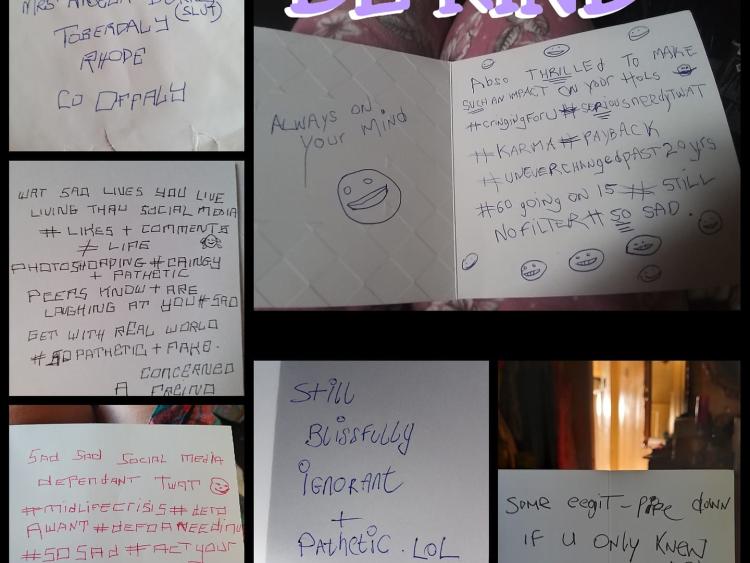 An Offaly woman targeted by vicious hate mail has referred the matter to An Garda Síochana and An Post.

Angela Burns, the founder of the popular Chocolate Box jewellery company came forward in recent days to highlight the abusive mail she has received over the last eight years.

In the wake of the death of British TV presenter Caroline Flack, the hashtag #bekind has been sweeping the internet, shining a light on the effects of personal abuse, both online and in print.

In a Facebook post where she says "we all need to be kind," Angela wrote, "I finally feel it's my duty to highlight this issue of harassment. This just goes to show that it's not just celebrities that receive hate mail but regular people like us."

Angela says she and her partner have been receiving these letters for "a long time now," adding that they "seem to be from the same cowardly person."

"This is just a small selection of what we have received," she said.

Later, Angela gave an interview to Midlands 103 where she says receiving the hate mail has been "a big shock," adding that she couldn't believe it when it started.

"I just wondered who could send such a thing; I didn't have any enemies, I thought, so I didn't know what to do."

Some of the letters were addressed to Angela with the word 'slut' placed in brackets beside her name. The correspondence labelled her "pathetic and fake" and ominously warned of "payback" and "karma."

She has now referred the incidents to gardaí and An Post.