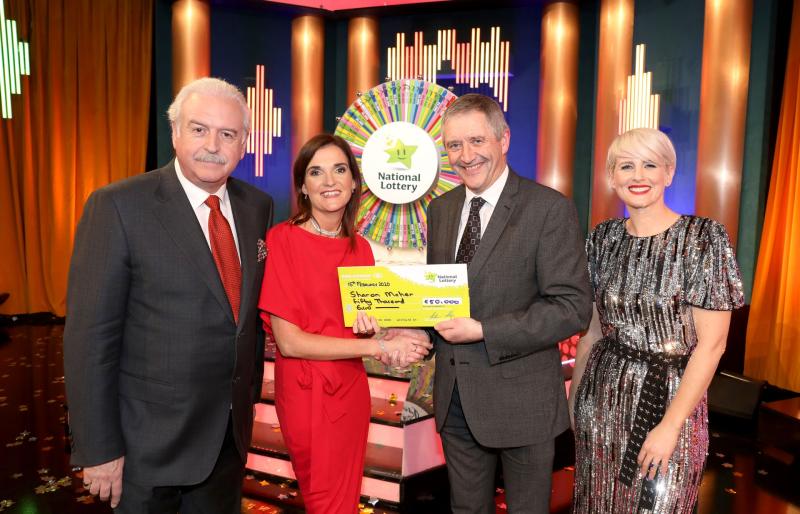 A cardiology nurse specialist from Offaly would surely have felt her pulse rising as she spun the Winning Streak wheel when she appeared on the National Lottery TV game show last Saturday, February 15, and won a cool €50,000 on the RTÉ One show.

Sharon Maher from Tullamore was delighted with her night’s work on Winning Streak, winning €22,000 on the wheel, after scooping €28,000 from the game show.

A few weeks back, Sharon found out she was going to be on the show after watching a movie with her husband and four kids, and just having switched on Winning Streak she heard her own name get called out by show presenters, Marty Whelan and Sinead Kennedy.

Sharon excitedly called all four kids downstairs, all of whom were getting ready for bed, and along with her husband, Ray there was a lot of excitement in the Maher household that night.

Sharon and Ray have been married for 12 years and the couple have four kids aged between 10 to two years of age. They are Luke, Aaron, Grace and Rebecca. Sharon is a busy mum and grew up in Tullamore in a large family, having had five brothers and four sisters.

By day Sharon is a cardiology nurse specialist in Tullamore hospital, where she has worked for more than 14 years. In her spare time, Sharon likes to run to keep fit and is also a member of a book club with her friends who meet up monthly.

With her winnings from the show, Sharon states that she is going to book a nice family holiday for this summer.

The Winning Streak National Lottery TV game show is co-presented by Marty Whelan and Sinead Kennedy and features some perennial favourite games including Play or Pay, Roll for Riches, WinFall and Electric Dream – where one player will win an electric car worth €25,000.

As ever one of the lucky five players will get the chance to spin the wheel and win up to €500,000. An exciting element of the show is that one €100,000 segment will be added to the Grand Prize Wheel every show if less than that amount was won in the previous show, improving players chances to win a massive prize.