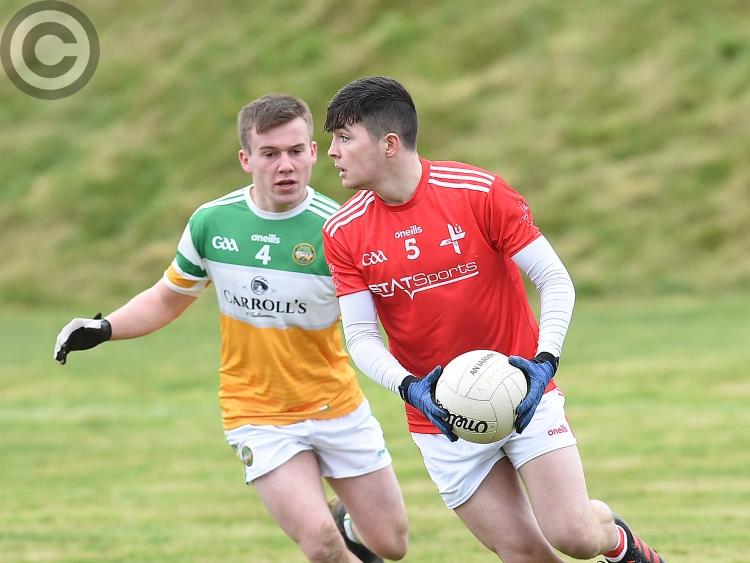 Offaly's U20 footballers handled the wild conditions better than their opponents to prevail in this scrappy affair with Louth on Saturday afternoon.

Louth dominated the clash possession-wise, but the concession of two slack goals, either side of half-time, proved hugely significant in the overall context of a game played in harsh conditions.

Had Daniel Corcoran and Liam Jackson been made available by the senior management, the outcome may have been different, though Offaly didn’t field a full complement either.

A stiff breeze whirled into the road-end goals of Páirc Uí Mhuiri and, ruefully, Aidan Shevlin’s charges failed to capitalise during the opening half, scoring a mere six points, whereas The Faithful managed 1-5 after the break.

Seán Courtney, Offaly’s Bomberesque full-forward, bagged the match’s only majors. Louth had been in total control, opening with three points to no-reply, when a brisk move by the Midlanders caught the home backline cold, Courtney taking possession on the way to goal before directing Martin McEneaney the wrong way.

Having had all of the play, it took The Reds some time to recover their composure from the body blow, with five of their 10 wides overall coming over a wasteful spell prior to Carl Gillespie, who gave an impressive individual account, establishing a two-point advantage at the halfway juncture, 0-6 to 1-1.

So sharp was the Ardee man that it was a major surprise to see his withdrawal towards the close, at a time where Louth were in need of a clinical presence in front of the target.

Clearly, Offaly held pole position at the turnaround, considering the gust and their more cohesive play, though The Wee County resumed positively, with Gillespie extending the gap from a free.

However, by the time Louth would next score, Gillespie adding just the team’s second point from play, their hopes of victory had faded extremely, Courtney’s second goal, a flick of a hopeful punt, deflating the home outfit’s challenge.

Aaron Kellaghan, son of former Offaly star Pascal, subsequently put The Faithful ahead and when Cathal Flynn followed it, the gap was two and Louth were staring at a hapless exit.

Yet they summoned a late push, albeit lacking the sort of ingenuity required to truly threaten Offaly’s position of command.

The young Faithful charges will now face neighbours Kildare in the Leinster quarter-finals.