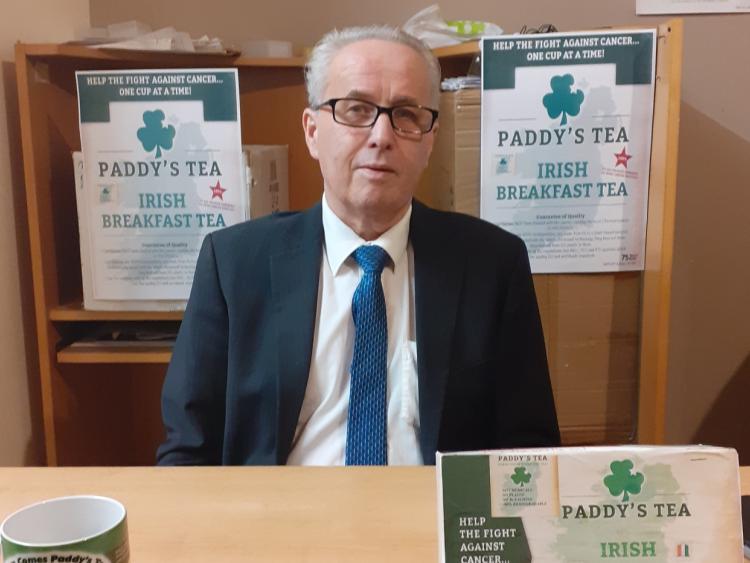 An Offaly man who survived cancer after 40 rounds of treatment at St Luke's Hospital is launching a brand new tea company to raise money for Irish cancer services.

John McKeigue is in the process of launching 'Paddy's Tea' - a product free of any harmful chemicals - and he plans to tap into the huge tea market in Ireland and abroad to raise funds for St Luke's and the ongoing fundraising push for the Midlands Hospice.

He attributes his recovery to all the wonderful staff in St. Luke’s Cancer Care department in St James’s Hospital Dublin who provided him with the medical treatment he so badly needed having been diagnosed with prostate cancer in 2017.

In order to support cancer services financially, John wanted to set up something that would be a "perpetual fundraiser" rather than a one-off event. With that in mind, he took on the incredible task of setting up his own tea company with 100% of the profits made going to cancer services.

He landed on tea because Irish people drink an average of five cups a day and he thought he could tap into that market potential with a product that was free of chemicals and plastics. He has lined up stockists around Ireland and as far away as America and Australia when the product hits the shelves later this year.

A press launch will take place at 4pm on Monday, February 3, at the Bridge Shopping Centre with the product expected to hit the shelves in late March or April. "We will have a full launch at that time outside one of the large stockists in Tullamore where people can go in and buy their Paddy's Tea. We hope this will take off because it doesn't put extra expense on people; it just asks them to pick up Paddy's when they go to buy their tea every week," John McKeigue said.

That launch will be carried out in conjunction with The Hope Mobile, which is a refurbished Pope Mobile. "The owners have generously donated the use of it for both our own launch and for a similar launch in every county over the next number of months," John said.

"Proceeds from all photographs of locals sitting on the Pope's chair in the Hope Mobile at each venue on the day will be donated to a local charity/fundraiser chosen by the winning host of that day. So, if your running your own local fundraiser this could be your way to make it a success," he added.

"On one particular Tuesday morning while in St Luke’s waiting room awaiting my treatment, I met a lovely lady from the Friends of Saint Luke’s, Geraldine Stafford. We got into a conversation about what exactly they do to help all cancer diagnosed patients. That conversation was to turn out to be a light bulb moment for me.

"On the days to follow that I was attending St. Luke’s over the six weeks of my treatment, and while in the waiting room awaiting my treatment, I got into the habit of writing down notes about my whole experience, and about my fears, feelings, and hopes for the future. Then when I would be travelling to Dublin on the train for my treatment, and on the return journey, I would read them over again what I had written earlier and what I had written on previous days, as my thoughts began to crystallize, and a plan gradually began to emerge over the next forty days.

"Then on the fortieth day, the last day of my treatment, the very welcome moment had finally arrived where I could say to myself “I’m finished with my treatment, it’s all over now.” Not only did I have the hope and opportunity of a good few more healthy years ahead of me after my successful treatment, but there was also the added bonus that I now had a plan, Paddy’s Tea. It was a plan to help many other cancer patients in the future, to help lighten their load. This wonderful feeling of positivity inspired me even more to bring the plan to fruition.

"Now, this is where you the people of Ireland can come to play your part, as almost every family in Ireland has been touched in some way or another, either by a family member, relation, or friend being diagnosed with cancer and in need of these specialist services.

"So please support these very worthy causes by purchasing Paddy’s Tea. Please also tell all your friends and relations, who are part of the Irish Diaspora around the world, about this wonderful initiative, and let us toast to all of our continued good health," John concluded.

Paddy's Tea will be available from March or April, but you can spread the word now. You can find out more about the new product and John's story HERE.