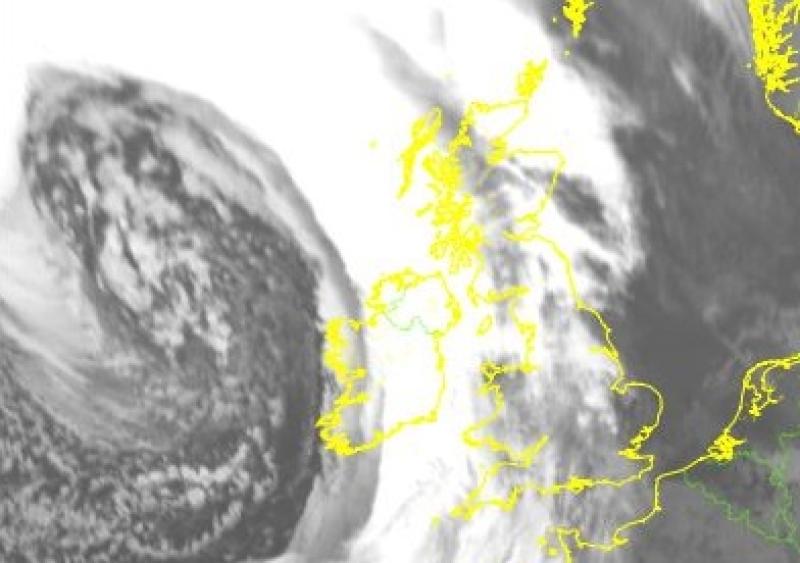 Offaly weather forecaster Cathal Nolan has hit back at comments by Met Éireann's Evelyn Cusack he deemed to be directed at services like his in the wake of Storm Brendan.

Speaking on Sean O’Rourke’s show on RTE Radio 1 this morning, she said that people have been putting out fake weather charts ahead of Storm Brendan reaching landmass.

Cathal Nolan from Ireland's Weather Channel said: "I take each of these claims to be gravely mistaken as all the weather forecasts and warnings provided by this service are done so through the consultation of numerous sophisticated weather models, years of dedicated experience in forecasting such conditions, and at all times are presented in a manner which seeks to reduce the overall risks to the general public in a timely and appropriate manner.

"Ireland's Weather Channel was created due to public demand for an alternative meteorological forecasting service, which would provide weather forecasts and warnings with the very highest levels of accuracy and professionalism, as well as being communicated in an easily understood and timely manner.

"Ireland remains one of the only countries in Europe with just one meteorological forecasting service, which I personally feel lowers the overall standards of forecasting due to a lack of competition from the private sector."

It is noted that Ms Cusack did not name any specific weather service in Monday's radio exchange.

Cathal said his education backs up his forecasting credentials. "I am the holder of a BA in Geography and History from UCD, an MSc degree in Climate Change Science and Impacts from UCD, as well as an MA in Politics also from UCD. At present, I am a PhD Scholarship student working in University College Cork on a project which examines the impacts of climate change on the overall production of fodder on the island of Ireland and how climate change will impact the growth of fodder in the near to medium-term future.

Speaking specifically about the weather of the last number of days, he added: "Regarding Storm Brendan, I believe that overall Met Eireann's forecasts and warnings were accurate to a certain degree, however, I would argue that coastal districts of the south and south-west, as well as coastal districts in Connacht and Northwest Ulster should have been issued with a red level weather warning.

"Wind gusts of over 135 km/h were recorded along the south coast of Cork yesterday, a level which exceeds the 130 km/h mark which is required for a status red weather warning to be issued, while the physical impacts in certain counties such as Cork, Kerry, Mayo and Donegal were on an order which would have justified the issuing of a higher category of warning than that which was given.

"The exact reasons behind the failure to issue a status red weather warning can only be speculated upon, however, it does appear that a certain level of conservatism exists within the current weather warning system, a system which I believe requires a review so as to establish best practices for future severe weather events."

He also said: "Ireland's current weather warning system is not fit for purpose and needs a considerable restructuring in order to bring it in line with other European nations weather warning systems. The county by county system of issuing yellow, orange and red weather warnings is simply inadequate as meteorological conditions can change drastically in this country over a very short geographical space. For example, yesterday saw win speeds of 135 km/h on the south Cork coast, surpassing the limits required for the issuing of red weather warnings, while parts of north Cork merely saw winds of around 90-100 km/h. Therefore within one county one could argue that all three scales of colour-coded warnings were justified, yet under the current system only one colour is allowed.

"My argument would, therefore, centre around the need to create a much more site-specific weather warning system, one which breaks the county's down on a community by community basis or voting district scale. Once established the system would allow for certain coastal fringes such as south Cork, or west Galway to receive the correct level of weather warning, while at the same time ensuring that centres of economic production such as Cork City or Galway City could function as normal."