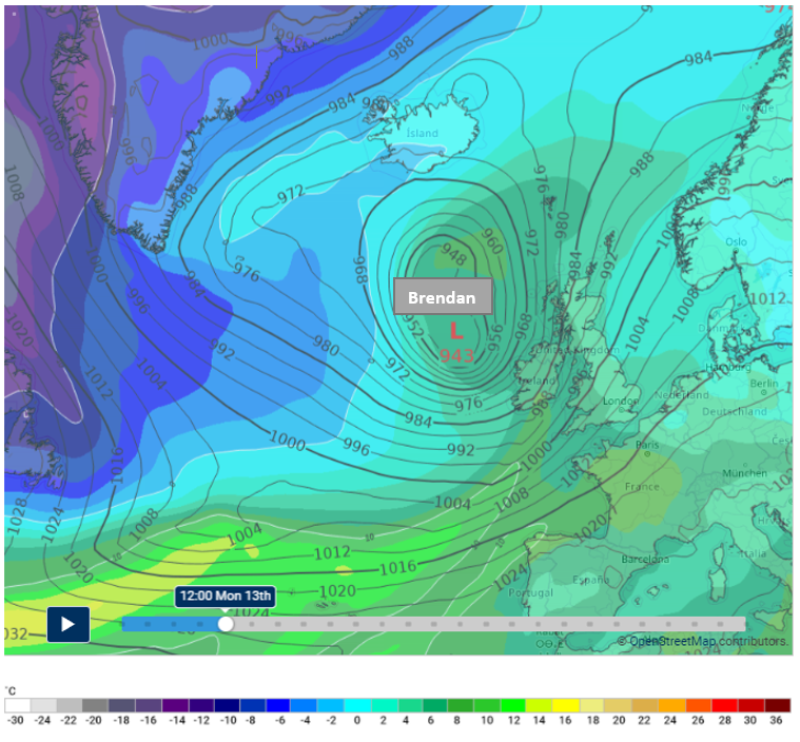 Storm Brendan is currently moving across the Atlantic and will affect Ireland on Monday bringing stormy conditions, heavy rain and high seas.

A Commentray issued by Met Eireann, compiled by Evelyn Cusack, Head of Forecasting and Eoin Sherlock, Head of Flood Forecasting states that Storm Brendan is forecast to track eastwards across the Atlantic undergoing rapid cyclogenesis as it engages with a very strong Jet Stream.

Met Eireann is warning to expect disruption to travel and possible localised flooding, especially in coastal areas. There may also be some localised structural damage and trees uprooted.

The strongest winds will be initially along the west coast early on Monday morning before they spread countrywide during the morning affecting eastern counties around midday into the early afternoon. Disruption to travel and localised structural damage is possible as these winds affect the country.

Here is our 7 day Atlantic Chart, showing the pressure and precipitation forecast in 6 hours intervals.https://t.co/9Giuj4CR5mhttps://t.co/9gKN6SVok4 pic.twitter.com/haky7wDz3I

The commentary from Met Eireann states, "we are also in a period of Spring Tides. Storm Brendan will produce significant storm surges and the combination of these high Spring Tides, onshore storm force winds and storm surge will lead to a risk of flooding along all coasts. There is a significant risk to the south, west and northwest coasts with an elevated risk for all eastern coastal areas due to the high tides and the projected storm surge forecast."

Offshore wave heights of up to 14 metres are forecast with high or very high seas forecast along all coastal waters. Met Éireann has issued a Status Red Marine warning for winds reaching violent storm force 11 in the west.

Heed the advice of the local authorities, the Gardaí and the HSE.