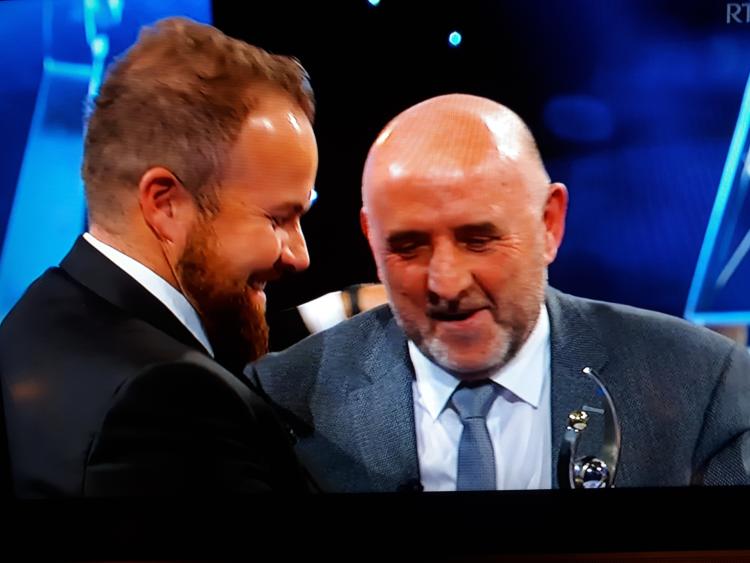 Offaly's own Shane Lowry was the big winner as this year’s RTÉ Sport Awards were announced on Saturday, December 14 live on RTÉ One television and the RTÉ Player.

The Clara golfer was voted the RTÉ Sport Sportsperson of the Year after a year in which he claimed his first major title in commanding fashion in the 148th Open at Royal Portrush.

The Clara man battled miserable conditions to become the fifth Irish player to lift the Claret Jug. He also won his first tournament in three and a half years with victory in the Abu Dhabi Championship at the start of the year.

Speaking before being named the winner Shane reflected on an incredible year with host Darragh Maloney. He said he knew his game was in good shape but "never dreamed I'd achieve anything like this."

Shane was later presented with the award by his father Brendan Lowry. Shane dedicated the award to late Clara club man and former goalkeeper John Buckley whose funeral takes place this weekend.

Also on the night, former Dublin Football Jim Gavin was named RTÉ Sport Manager of the Year for overseeing an unprecedented five-in-a-row All-Ireland titles and in doing so taking his place in GAA history.

Gavin’s former charges Dublin made history in September when winning that fifth All-Ireland title in-a-row. After two epic final encounters with rivals Kerry, the Dubs have now taken their place as one of the greatest teams ever and tonight were named RTÉ Sport Team of the Year.

Rhys McClenaghan created history this year as he became the first Irish gymnast to medal at the World Championships, claiming a bronze medal in the pommel horse. He also booked a place at the 2020 Olympic Games by qualifying for the final earlier in the week and was named RTÉ Sport Young Sportsperson of the Year for the second year running.

Olympic 5,000m silver-medallist and former World 5,000m champion Sonia O’Sullivan received the RTÉ Sport Hall of Fame Award recognising her many achievements in an Irish singlet during an incredible career.

The RTÉ Sport Awards were presented by RTÉ’s Darragh Maloney and Joanne Cantwell, and also featured a host of well-known Irish sports stars and analysts reflecting on the Irish sporting year that was.