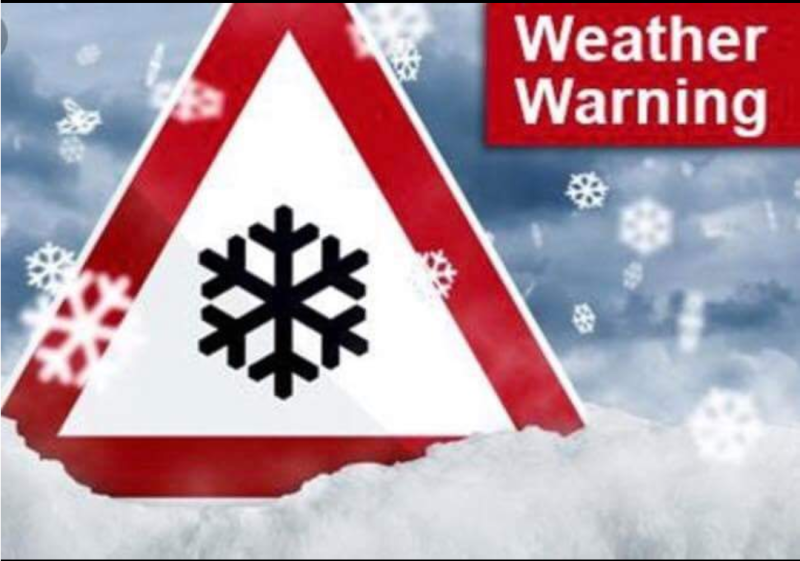 Met Éireann has issued weather warnings one of which is for snow and ice as Ireland faces into a spell of polar weather.

The forecaster has issued two low-level Status Yellow Warnings for wind, snow and ice for some counties on Friday. While, the warnings cover counties in the west and north-west, Met Éireann says it will be cold everywhere this weekend. MORE BELOW TWEETS

Friday night will be blustery with fairly widespread showers and more persistent rain in southern counties for a time. The lengthiest dry and clear spells will occur in eastern counties. Met Éireann warns that the showers will turn increasingly wintry later in the night with localised falls of sleet and snow.

Friday night will also be cold and frosty with the risk of ice and some lying snow. Minimum temperatures ranging -1 to +3 degrees in fresh to strong westerly winds with gales on Atlantic coasts.

Saturday will start cold and frosty with scattered wintry showers and some lying snow. Met Éireann says there will be further wintry showers during the day, frequent in the southwest, west and north with the continued risk of snowfall. The lengthiest dry and bright spells will occur over the eastern half of the country. Highest temperatures of 3 to 6 degrees in fresh to strong southwest winds.

Saturday night will also be cold with showers of rain or sleet, with some snow possible over high ground. A widespread frost with minimum temperatures of -3 to +1 degrees, is also forecast. It will be coldest in the north. Winds will be mostly moderate southerly.

Sunday will start frosty with icy patches. It will be another day of widespread showers which will be wintry at times. Temperatures will rise no higher 6 degrees though winds will be mostly moderate. The showers will become confined to coasts in the evening. A widespread frost is also likely on Sunday night, lows of -3 to 0 degrees.

Monday is likely to be more settled after a cold dry start. Maximum temperatures of 4 to 7 degrees, coldest again in the north. Moderate southwesterly winds. There will be another widespread sharp frost on Monday night, lows of -3 to 0 degrees with patches of fog forming in light variable breezes.

Tuesday will also see a cold, frosty start but it looks like being a mostly dry and settled day with some hazy spells of winter sunshine in light winds. However, it looks set to remain chilly, with highs of just 3 to 5 degrees. It is likely to be very cold again on Tuesday night with a widespread sharp frost, and freezing fog forming in places in slack winds.

Wednesday looks set to start cool and dry, before more unsettled and milder weather arrives for late Wednesday and Thursday. more below tweet.

Status Yellow - Wind warning for Donegal
Strong westerly winds Friday night and for a time Saturday. Mean speeds 50 to 65 km/h gusting to 90 to 110 km/h with a risk of stronger winds at the coasts.

Status Yellow - Snow/Ice warning for Cavan, Donegal, Leitrim, Mayo, Roscommon and Sligo
Wintry showers will give localised accumulations of hail and snow, compacting to ice in some areas and leading to hazardous driving conditions.