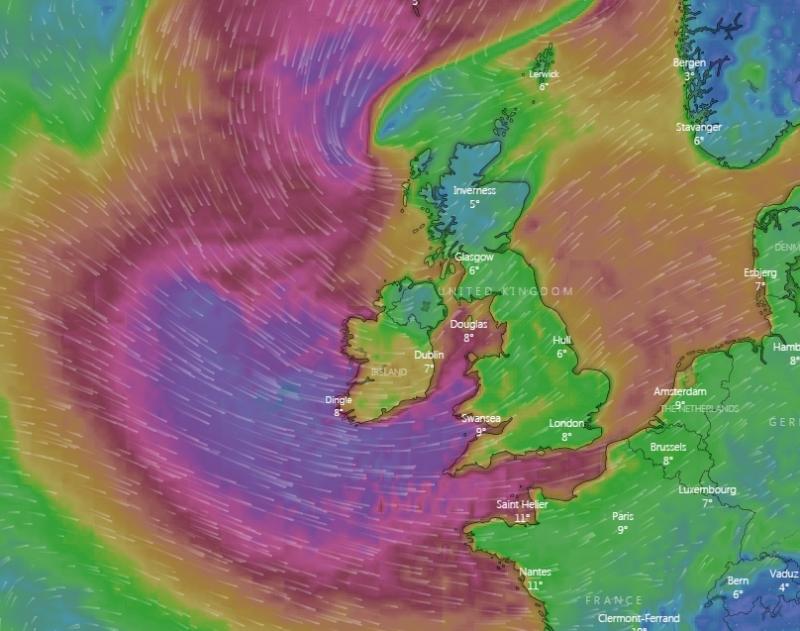 There are now four Weather Warnings in place for Ireland from Met Eireann as Storm Atiyah tracks towards Ireland.

The warnings cover the entire country with gusts possibly higher than 130km/h expected in places.

Storm Atiyah will track between Iceland and Ireland on Sunday, generating very strong winds across the country. Southwesterly winds, later veering northwesterly, will reach mean speeds between 65 and 80 km/h with gusts between 110 and 130km/h, possibly higher in exposed coastal areas. Met Eireann says that due to a combination of high seas and storm surge there is a possibility of coastal flooding.

There is also a Status Yellow Rainfall Warning for Donegal. Rainfall accumulations of 30 to 40mm expected during the period between 6pm on Saturday and 6pm on Sunday.

Ahead of Storm Atiyah there is a Status Yellow Wind Warning for all of Ireland. West to southwest winds will reach mean speeds of 50 to 65km/h with gusts of 90 to 110km/h in places this evening, tonight and Sunday. This warning is in place from 7pm on Saturday until 1pm on Sunday.

From 1pm on Sunday until 6am on Sunday, a Status Yellow Wind Warning is in place for Leinster, Cavan, Monaghan, Roscommon, Tipperary and Waterford. Met Eireann states that Storm Atiyah will track between Iceland and Ireland on Sunday, generating very strong winds across the country. Southwesterly winds, later veering northwesterly, will reach mean speeds between 50 and 65km/h with gusts between 90 and 110km/h.