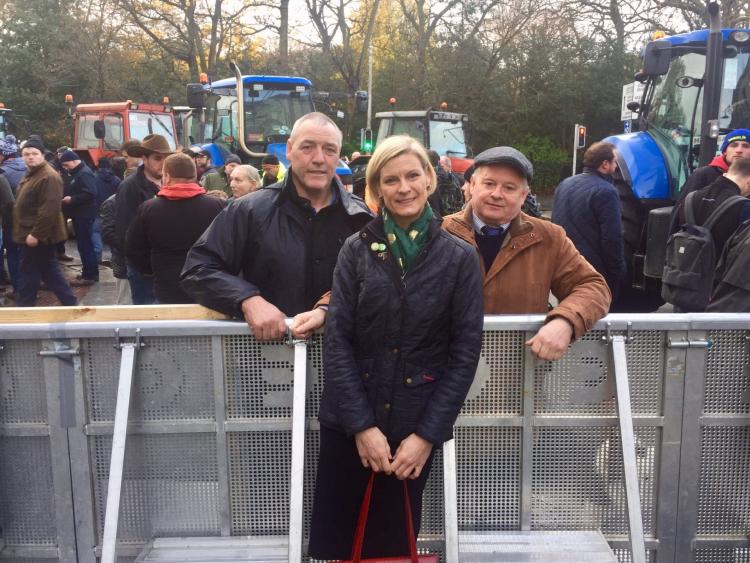 The Government must be held to account for crisis in beef farming which led to widespread to disruption in Dublin on Tuesday and Wedensday as farmers brought the city to a halt with a tractor protest.

That's according to beef farmer and Green Party Senator and Spokesperson on Agriculture, Pippa Hackett.

Speaking following the end of the protest, the Offaly native stated, “I was out speaking with the farmers protesting at St Stephen’s Green yesterday morning, and the mood has not changed since meeting some of them at a previous protest outside Leinster House, and others at the meat processing plant in Rathdowney, Co Laois. In fact, the sense of frustration and despair has heightened. The promises made in the beef talks in September, have not resulted in a successful outcome for these farmers, and they are back out on the streets."

Senator Hackett continued, "today, we read that Brazilian beef farmers have enjoyed an increase in price of 30% in the last few weeks (to the equivalent of €3.29/kg) and yet Irish beef stagnates at nearly 20c/kg below the EU average at €3.40/kg. The Government’s agri-food policies, with the help of state agencies like Bord Bia and Teagasc, have effectively devalued Irish beef, by pitching it against global giants of beef production in a global marketplace. They are wholly responsible for the demise in Irish farming. Bord Bia seem happy to continue to represent the interests of multi-national corporations with multi-billion euro turnovers, and while their profits grow year on year, Irish farmers on the ground face higher production costs and lower prices. Our farmers are caught between a rock and a hard place, with few options, and no proper supports to improve farm incomes.

She said that 'transparency and fairness' was vital within the sector adding that four months ago, before any talks took place, the Greens called on the Minister to establish an independent review of the Irish beef sector which has still not happened.

“All our farmers and their families want is a fair trade and a fair price for their produce," she commented. "We expect a lot from our farmers, we expect them to adhere to rules and regulations, to engage with policy makers and legislators in reducing emissions and improving biodiversity and other environmental outcomes, yet when they face significant difficulties as is seen at the present time, they are left with little or no support, and no light at the end of the tunnel either.

“The agri-food system is broken in this country. From inside the farm gate all the way through to the consumer. Creating a consistently high demand for Irish food, while at the same time addressing our environmental commitments should be at the heart of any effective solution for the Irish agri-food sector."

Senator Hackett also said a new land use plan was required to deal with the crisis of climate change and biodiversity loss, and also to turn the tide on depressed prices for our primary producers. She added that farmers will be relying heavily on a significantly reformed CAP to deliver the essential transitions and opportunities for their farms.

"A business as usual approach, with a few cherries on top will not suffice. Food production will always remain central to our land use, but we must consider ways of adding real value to that product, and paying our farmers for public goods such as carbon storage, water and air quality, and of course for biodiversity.  The clock is ticking, and our farmers are running out time, and hope," the Offaly beef farmer concluded.

I had a long chat with some of the protesting farmers this morning, and followed up with a statement in the #Seanad. The Irish agri-food sector is broken - from #Farm2Fork. A significant #CAPReform will be vital to secure a viable future for Irish farmers. #BeefProtests pic.twitter.com/IW6aUlwefx