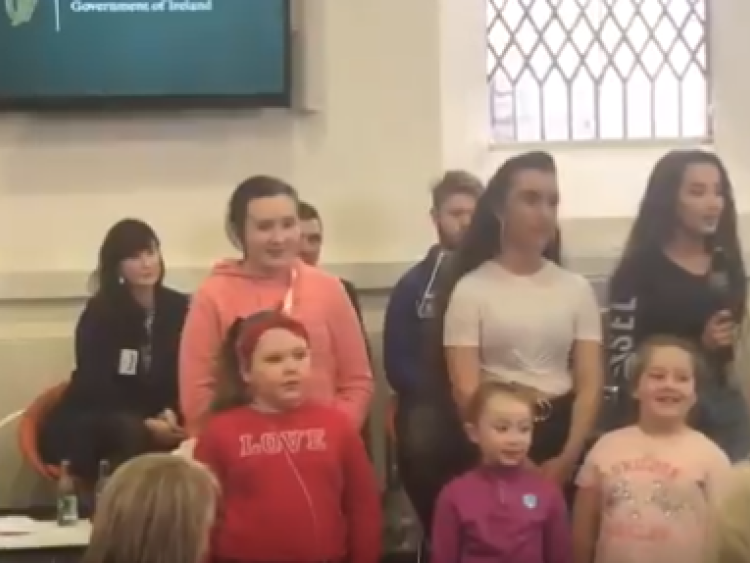 The little Minceirs from Offaly Traveller Movement came along to help Minister @mitchelloconnor launch the Action Plan for Increasing Traveller Participation in Higher Education, with their stunning performance of ‘Labels’. #EducationForAll pic.twitter.com/czZaQWeZLH

The Minister was joined at the launch, held in TU Dublin, by several third-level students and recent graduates from the Traveller community, who told their own stories of studying in universities and colleges around Ireland, and gave insights into the supports that are most useful to students.

The Action Plan is part of the implementation of the National Access Plan for Higher Education 2015-2019 (now extended to 2021). The plan was developed in consultation with Traveller representative groups, and aims to support and advance Traveller participation in higher education. It will work within the context of approaches to retention and transitions of Travellers across the education spectrum.

Minister Mitchell O’Connor said: “Travellers are among the most underrepresented group studying at third level. The National Access Plan (NAP) last year showed that while there is evidence of limited increased participation by Travellers in higher education, we still have some way to go to achieve the target set.

"The Government’s aim is to double the number of Travellers studying in our higher education institutions. Today’s plan is focused on achieving this goal, building on the good work already being done to widen access to higher education to people who traditionally have not seen it as a viable option for them.

“I am determined that Traveller young people, from an early age, will see going to college and having all the options that are available to other young people as a realistic future for them. I want to make it a reality that every Traveller – whether in school or a more mature person – has real choices to go to college or take part in higher or further education if that is their wish.

“The students here today telling of their experiences are ambitious, and we are ambitious for them, and for those coming along behind them.  We know from consulting with our student Traveller population that they value the supports being put in place. So, taking our inspiration from these motivated young people, and spurred on by their success, we need to do more, and work harder to help them and the young people who come after them to succeed in third-level education and beyond.”

Central to the Action Plan will the supporting of student success right through the education journey – promoting a sense of belonging in school and support and transitions from post-primary to further education and higher education. The action plan seeks to address and break down the cultural barriers that impact on Irish Travellers achieving their full potential in education. Enabling Travellers to return to education as a mature student is also a key priority.

Under the National Plan for Equity of Access, investment in access measures through the new Innovation €16.2m PATH Fund for all target groups has to date increased participation within the Traveller community in higher education institutions.

The PATH fund is supporting the entry of students who self-identify as Travellers to a wide range of courses, including a specific approach to encourage diversity in the teaching profession. It provides targeted supports and bursaries, and supports regional collaborations between clusters of higher education institutions and community partners.

The Minister said: “I would like to thank all those who have been involved in the development of the plan, and acknowledge particularly the input of Traveller representative groups. They are an enormous support to the Plan’s implementation partners in ensuring that we foster relationships and deepen our understanding of the barriers facing Traveller families. Discrimination, bullying and lack of understanding of their unique culture and heritage are just some of the challenges members of the Travelling community meet every day.

“It is essential that we continue to work in partnership to identify and remove these barriers, creating a more accessible and more equal future for Travellers in our higher education institutions, which will benefit from their contribution.”