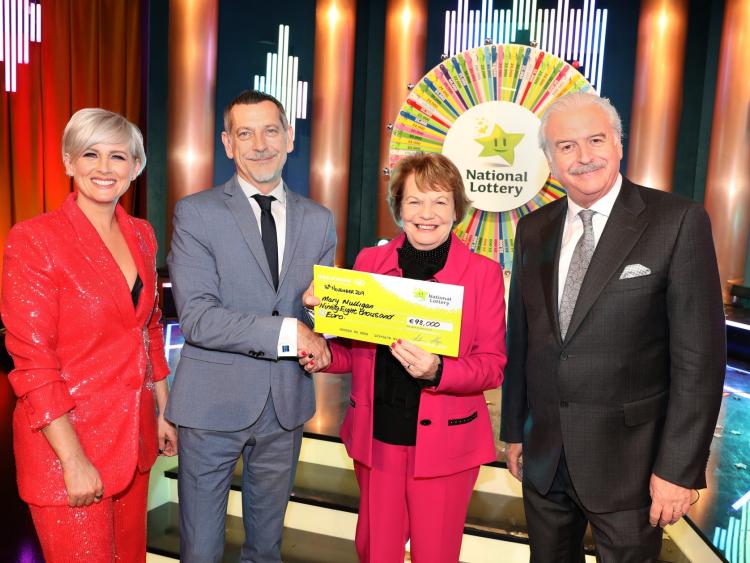 A lucky woman from Rhode, Co Offaly has walked away with a €98,000 windfall after her appearance on the Winning Streak TV gameshow last Saturday.

Mary Mulligan, who only recently retired, spun €60,000 on the iconic Winning Streak wheel added to the €38,000 which she had already won earlier in the show.

Retiring from Offaly County Council back in August, after 20 years of service, Mary is enjoying retired life and not needing to live by the clock. Getting to go on the National Lottery game show is the icing on the cake of a great year for her.

Mary got a huge shock when Marty and Sinead called her name out on the previous Saturday’s show and she leapt out of the chair to tell her husband William and daughters, who were upstairs at the time, Callista and Alison.

However, they just laughed at her as they thought Mary was having a joke with them. She watched with the rest of the family until her name came up on the end screen and only then did the family believe her!

Mary and William have been married for the past 39 years and have three daughters with their other daughter, Gillian who has been living in Sydney, Australia for the past eight years.

Gillian was watching on from the RTÉ Player while the rest of the family were in attendance to cheer her on from the studio audience with some other family members and friends of Mary.

Mary loves GAA and was quite the player back in the day having won a lot of club titles with Ballycommon GAA club where she played as a forward. She also played for the Offaly side and contested an All-Ireland final which they lost in 1975 (to Tipperary).

When she finished her playing days she went straight into coaching the local school team in Rhode. She loved coaching and continued that for many years after.

Nowadays she is a supporter and cheers on Offaly from the side-lines and goes to the All-Ireland football final every year in Croke Park.

With her winnings from the show Mary will look after her family and says she will do a bit of home decorating and DIY jobs in time for Christmas.

The National Lottery game show is co-presented by Marty Whelan and Sinead Kennedy and features some perennial favorite games including Play or Pay, Roll for Riches, WinFall and Electric Dream – where one player will win an electric car worth €25,000.

As ever, one of the lucky five players will get the chance to spin the wheel and win up to €500,000. An exciting element of the show is that one €100,000 segment will be added to the Grand Prize Wheel every show if less than that amount was won in the previous show, improving players chances to win a massive prize.

A brand new-look Winning Streak scratch card is available in the 5,900 National Lottery retailers all over the country. In addition to the chance to appear on the Winning Streak TV game show if you get three stars, players will also be in with a chance to win some great cash prizes up to €5,000. The odds for those who purchase a Winning Streak to win is 1 in 1.86 to win a cash or three star prize. All players who purchase a scratch card can send their stubs into the National Lottery using grey envelopes, available in all National Lottery agents, where each week on the show, a player will be drawn as the winner of a Luxury Cruise for two valued at €5,000.

Nearly 30 cent in every €1 spent on Winning Streak and all National Lottery games goes back to Good Causes in the areas of sport, youth, health, welfare, education, arts, heritage and the Irish Language. In total more than €5.4 Billion has been raised for Good Causes since the National Lottery was established 32 years ago. In 2018 alone, more than €228 million was raised; the equivalent of almost €625,000 a day in support for local Good Causes in communities across Ireland.