'Severe' frost in Met Eireann weather forecast for the weekend 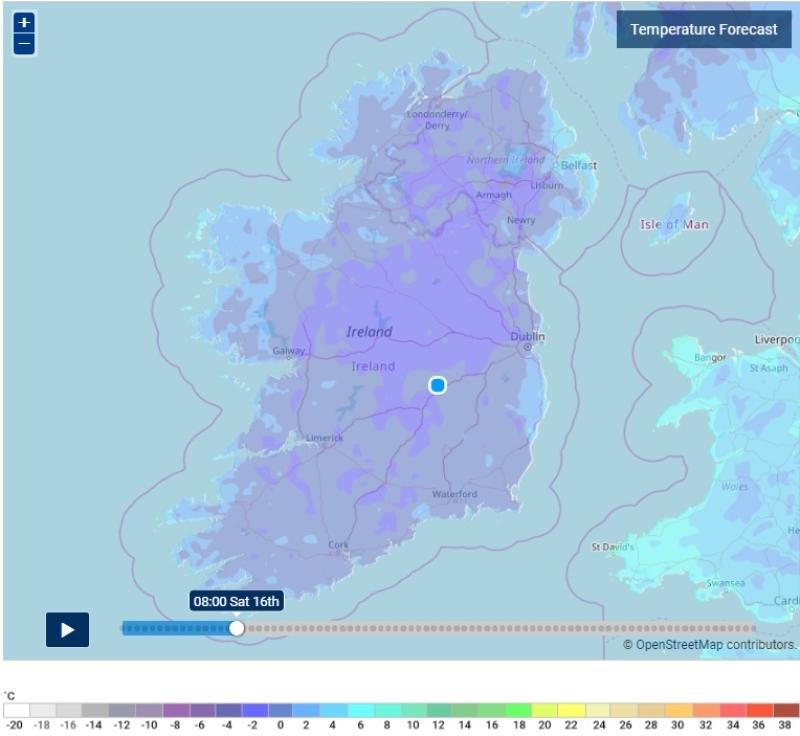 In the weather forecast for Ireland for the weekend, Met Éireann is forecasting the cold snap to last through the weekend bringing 'severe' frost and freezing fog though milder but wetter weather could be on the way next week.

Friday night will be dry and very cold with a widespread frost. The frost will be sharp to severe with icy patches. Minimum temperatures -2 to +3 degrees. Becoming very misty with the risk of freezing fog patches later in the night - especially inland in near calm conditions.

The weather forecast for Saturday for Ireland from Met Eireann is for it to be dry in most areas. The frost will clear during the morning but fog may linger over some inland areas for a while. Much of the south and east will have hazy sunshine, but cloud will increase from the west with outbreaks of rain in western counties during the afternoon and evening. A cold day. Highest temperatures ranging from 3 degrees where fog lingers to 7 degrees near coasts.

Dry in many areas on Saturday night, with a few clear spells, but mostly cloudy, with outbreaks of rain and drizzle, mainly in Atlantic coastal counties. Minimum temperatures 0 to 4 Celsius, with a risk of frost where any breaks in cloud occur. Risk of fog also, in slack winds.

The weather forecast for Sunday for Ireland from Met Eireann is for it to be mostly cloudy at first, with some patchy rain and drizzle in places, but becoming bright and mostly dry during the day, with sunny spells developing. However, a few scattered showers will occur along northern and eastern coasts. Cold, with maximum temperatures of 6 to 9 Celsius, in mostly moderate northerly breezes, fresh on exposed coasts.

Sunday night will be mainly dry and clear, but very cold and frosty, with a risk of icy patches. Mist and fog patches also. Minimum temperatures 0 to -4 Celsius.

Tonight will be dry and very cold with a widespread frost. The frost will be sharp to severe with icy patches. Minimum temperatures minus 2 to +3 degrees. Becoming very misty with the risk of freezing fog patches later in the night - especially inland in near calm conditions. pic.twitter.com/HTFwatMiov

The outlook is for temperatures to recover closer to normal values from Wednesday onwards, with no significant frost.

Our Atlantic chart shows precipitation and pressure forecast in 6 hour intervals for the next 7 days.https://t.co/9Giuj4CR5m

The national forecast and the outlook for the next few days is available here:https://t.co/9gKN6SVok4 pic.twitter.com/hNAsXKOB4d

Monday is set to be a dry and bright, with frost and fog clearing gradually, but possibly lingering on for much of the day in some sheltered places. Cold, with maximum temperatures of 5 to 8 Celsius, in light variable breezes. Dry in most areas on Monday night, with a risk of frost, especially in the north and east. Risk of fog in the early night, clearing later, as winds freshen from a southeasterly direction, with rain moving in across west Munster and west Connacht.

Tuesday will see rain extending gradually from the west and southwest, with some heavy bursts. Brighter conditions, with isolated showers, will follow into Munster and west Connacht later Tuesday, extending to most areas on Tuesday night. Min. 0 to 5 Celsius, with a risk of a slight frost in places.

Current indications for the rest of the week suggest that changeable, unsettled weather will continue with occasional showers or longer spells of rain at times, but with dry, bright intervals also. Met Éireann expects it to become a little milder as the week goes on.