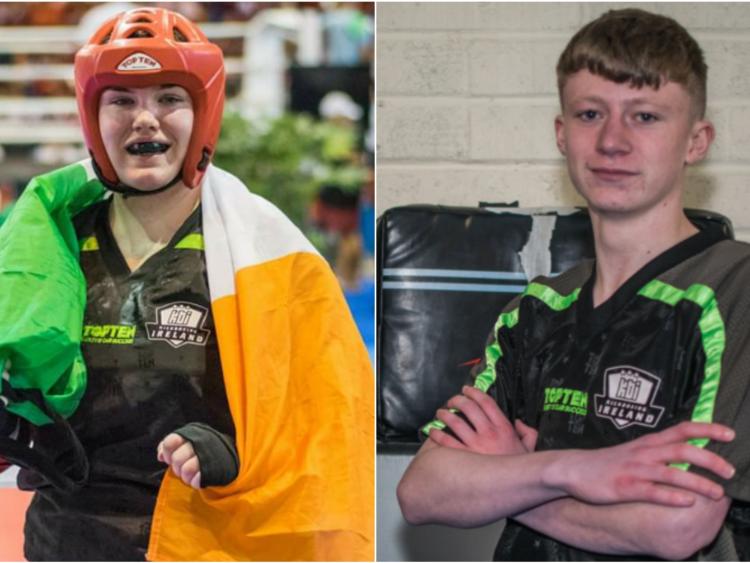 Two kickboxers from Offaly club on top of world rankings

Edenderry’s Team Hurricane Kickboxing ended the year with two fighters rated No. 1 in the World rankings. Both Jordan Doran and Luke McCann finished the year as top-rated athletes in Light Contact in the Junior (U19) section.

The World Association of Kickboxing Organisations (WAKO) rates athletes in all grades, recording results over the previous two years on Sportsdata event management software. Points are awarded in major international championships such as European or World Championships and also the WAKO World Cup events.

The WAKO World Cup events are the Irish Open, The Athens Challenge, The Hungarian Open, The Turkish Open, The Yokoso Dutch Open, The Flanders Cup, The Austrian Classics and The Bestfighter World Cup (Italy) and the further you progress in each event, the more points you earn.

The two Hurricanes achieved the rankings in totally different ways; Jordan amassing huge points over the previous two years with European and World titles and Luke, on the other hand, collecting a huge amount of points on the World Cup circuit pursuing his dream all over Europe.

Jordan completed her Leaving Cert this year and concentrated on her studies. It's her last year in Junior but Jordan captured the +70 Kg senior Irish title this year for the first time. As well as being World No. 1 in Light Contact, Jordan is also ranked 4th in Point Fighting and 6th in Kick Light with a senior World ranking of 38th already.

Jordan is currently studying in Maynooth and hopes to compete in the Irish Open in March with an eye on representing Ireland in the University games next year.

Luke McCann, known as the “King of 57s”, only moved up to Junior mid-way through the year but with less than 6 months at this level has reached the World No.1 spot at -57Kg Light Contact, 3rd in Point Fighting and 4th in Kick Light. Wins for Luke in the Austrian Classics, Dutch Open, The Flanders Open and The Irish Open to name a few means that Luke looks to cement his place at World No.1 for the next three years.

There is a huge financial burden for Luke and Jordan and their families, to compete at this level without any financial backing from any sporting organisation or government department. Both Jordan and Luke, along with clubmates Brandon Tait, Leah Grant and Nathan Tait, were more than happy with sponsorship received from Croi Laighean Credit Union and all the businesses around Edenderry, Derrinturn and Johnstownbridge who supported them in their trip to the recent European Championships.

There are also plenty of other Edenderry fighters featuring in the World rankings with Nathan Tait up to 6th in the Junior -63 Kg Point Fighting section, Leah Grant again in her 1st year in Junior up to 32nd in the -55 Kg Points section, Orla McCann also at 32nd in the -70 Kg Section with Saibh Kelly 28th in the +70 Kg Junior section, Dylan Whelan at 43rd in the -52 Kg Older Cadet section completes the underage sections.

On the home front, it has been a good month for Brandon Tait with victory in the Junior Grand Champion event at the Tallaght Open in the National Sports Campus with the €250 prize money an added bonus. This was Brandon’s last day as a Junior as he celebrated his 19th birthday the next day and Brandon captured the Senior Grand Champion event at the Bushido “Rumble” two weeks later.

The younger cadets (U13), Shannon Conlon, Alex and Ross Keyes also performed well at both the Tallaght Open and the Bushido Rumble.

Next up for Team Hurricane is the North East Open in Carrickmacross this weekend, the last Kickboxing Ireland Tournament of the year.

Jay Daniels will be travelling to Turkey at the end of November for the WAKO Senior World Championships (-69 Kg). Conor McGlinchey from Derrinturn, representing TMA and Ireland, will also be travelling to compete in the Senior -84 Kg section.