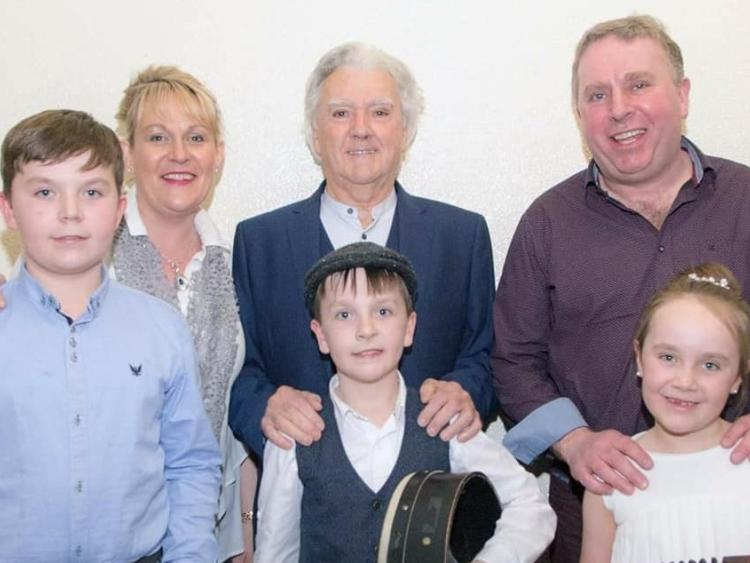 Offaly legend and local family to perform at Dáil fundraiser

The talented midlands family will join the Boy from Banagher in performing at a special fundraiser in aid of Trocaire organised by Ceann Comhairle, Seán Ó Fearghaíl, on December 12.

The Kilbeggan clan were also invited to add their musical gifts to the same event last year, joining the great Finbar Furey in providing the evening's entertainment. And indeed, there was one particular moment from that night which actually went viral the following day, when footage of little Thomas Wrafter singing I Remember You Singing This Song, Ma, accompanied only by Finbar, and totally unrehearsed, was shared online.

That night went on to close with the whole Wrafter family - once again, in a moment unrehearsed and unplanned - joining Finbar, at his urging, to perform Sweet Sixteen. Two moments which, by all accounts, the phrase 'not a dry eye in the house' could well have been invented especially for. And two moments upon which Peter Wrafter still looks back fondly.

"To have been in Finbar's company in such a unique setting, and to witness an artist of his stature perform in such an intimate way, that in itself was something very special. You couldn't but look back on it and smile, you really couldn't. That we actually ended up performing with him at the end of the night, well the size of that moment is something that I think the children will only really understand in years to come, as they begin to look back on some of these wonderful memories with a deeper appreciation of the artists they had the chance to stand beside."

And come December 12, the Wrafters will be performing alongside another man they already have some wonderful memories of, the fabulous singer/songwriter Johnny McEvoy.

"That's right, we had the pleasure of opening for Johnny at one of his Tullamore shows not so very long ago. And I have to say that we're all delighted another chance to share a stage with Johnny has come our way. To have had that opportunity even once was a blessing. That such an opportunity has come our way again is something we're immensely grateful for, and we have to say a big thank you to Sinead at Trocaire, and of course the Ceann Comhairle and his office, for extending this invitation to us once again this year."