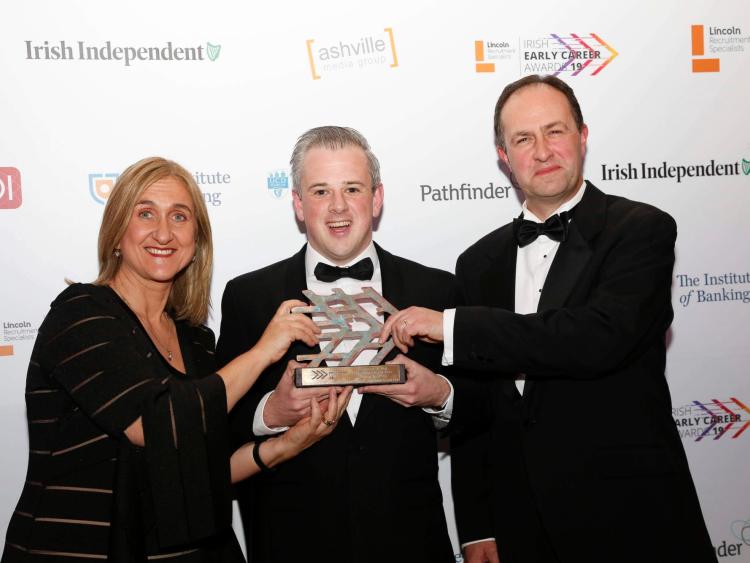 Offaly native Brendan McGrath has been honoured at the Lincoln Recruitment Irish Early Career Awards in association with KBC Bank, which took place in The Ballsbridge Hotel, Dublin, recently.

Brendan picked up the Compliance & Risk Professional of the Year award.

Brendan is a risk and audit manager with Centaur Fund Services. He also acts as the Data Protection Officer for the Centaur group. Brendan holds numerous professional qualifications. He became a Fellow within ACCA in 2019 where he has been fully qualified since 2014.

The 4th gala final celebrated the most ambitious young Irish professionals across industries such as marketing, digital, finance and law.

Gareth Hickey (28), CEO of Noa News Limited, received the overall Early Career Professional of the Year accolade following his company’s recent success with The New York Times, the Economist and other major international titles to deliver news over
audio.

With over 300 people in attendance and a total of 17 categories, there we a total of 150 submissions making this event the most competitive to date.

Speaking about this year’s awards, Shay Dalton, Managing Director at Lincoln Recruitment, sponsor and chairman of the judging panel, said: “Lincoln Recruitment is delighted to be the title sponsor of the Irish Early Career Awards for a fourth year. The awards celebrate excellence and recognise the achievements of brilliant young professionals in Ireland. Their aim is to recognise true innovation, best practice and outstanding achievement across a very broad range of categories and so impacting every industry in Ireland.

"This is why the awards are such a perfect fit for us in Lincoln Recruitment. Partnering with the Irish Early Career Awards adds to our existing network of support for young professionals across a wide range of sectors and so Lincoln Recruitment is honoured to support the work of the awards.”

Commenting on the partnership with Lincoln Irish Early Career Awards, Fergal O Riagain, Director of Retail Products, KBC added: “I would like to congratulate all the winners of this year’s Irish Early Career Awards. The calibre of finalists seen this year was outstanding and we are proud to have partnered with the Irish Early Career Awards again for the third year running.
At KBC, we know that it is people who make the difference and we also understand the importance of nurturing young talent.”
Katherine O Riordan, Events Organiser from Ashville Media Group commented:

“This year’s Lincoln Recruitment Irish Early Career Awards saw the toughest competition yet. With hundreds of entries, the judges faced an extremely tough task in recognising the most deserving young professionals this year. We are delighted for all the winners and wish them the very best of success as they continue to make an impact into the future through their chosen
career fields.”

To find out more about the Lincoln Recruitment Irish Early Career Awards in association with KBC Bank, visit www.earlycareerawards.ie.