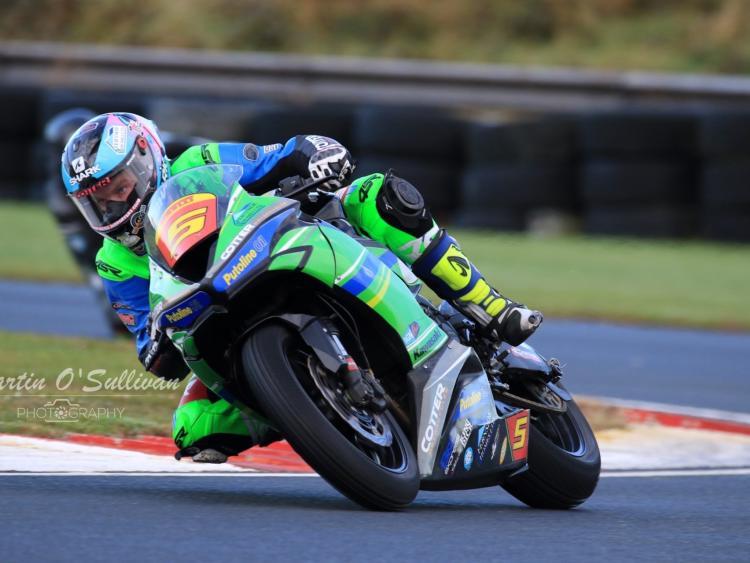 Offaly racer treated on track for 20 minutes after serious fall

Offaly man Kevin Keyes escaped with just bumps and bruises after taking a nasty fall during the Sunflower Race in Northern Ireland at the weekend.

The races in Bishopscourt were the last in 2019 for Edenderry native Kevin Keyes.

The track was well known to Keyes with him having numerous successes in all classes over the years, all the way back to his days on mini-motos.

Kevin performed well in cool conditions during practice sessions and qualifying and maintained a high position on the grid. He ended the day qualifying 12th in the Superbike class and 6th in the Supersport class.

Following a short warm-up session on Saturday morning, Kevin's first race was in the Superbike class and at the end of the 10 laps he finished in an excellent 6th place.

His second soon followed, again in the Superbike division, this time finishing in 10th place with teammate Tom Fisher on the Stock 1000 ahead in 9th and other teammate TJ Toms just behind in 11th.

The next race for Keyes was the big race of the weekend, The Sunflower Trophy. From 12th on the grid, Keyes was always going to have it tough with all of the Superbike riders out competing in the big race. But as is normal now for the Offaly man, he gave it his all from the start.

He did however drop to 14th, just behind teammates TJ & Tom, the tight 1.8 mile leaving it difficult to get an overtaking place.

On the last corner and heading into the last lap, disaster struck for Keyes as he and the bike parted ways and he went tumbling hard along trackside.

Such was the severity of his fall, medics and marshals were running towards him before he even came to a stop. The race was immediately red flagged to allow treatment to him and there was a very tense 20 minute wait then before he was eventually moved into the awaiting ambulance and brought to hospital in Belfast.

Thankfully for Keyes after being scanned, x-rayed and checked over, no major damage was found although he did leave on crutches nursing two very bruised ankles and a severely bruised coccyx.

After a night of rest at home, Kevin told us: “Sunflower was set to be a great event. I was going along with no pressure or any expectations and just to have fun. I was having some good results there, qualifying 12th in the superbike class and coming to the race finishing 6th, but unfortunately on Saturday in the main Sunflower Race as I was running 3rd Stock 600 and 14th over all against the Superbikes, on the last lap I had a crash and ended my weekend in hospital.

"But despite the crash it was a very enjoyable weekend. Now it’s time to rest and to get fitter and stronger for the 2020 season. Big thanks to all my sponsors for their support throughout the season."

The Kevin Keyes Supporters Club are holding a get together meal for Kevin, his family and sponsors in The Lily Garden, Chinese Restaurant, Edenderry, on Saturday evening November 16. Kevin will have his winning trophy from Silverstone there on the night and all are welcome to attend. Contact The Lily Garden to book and for prices.