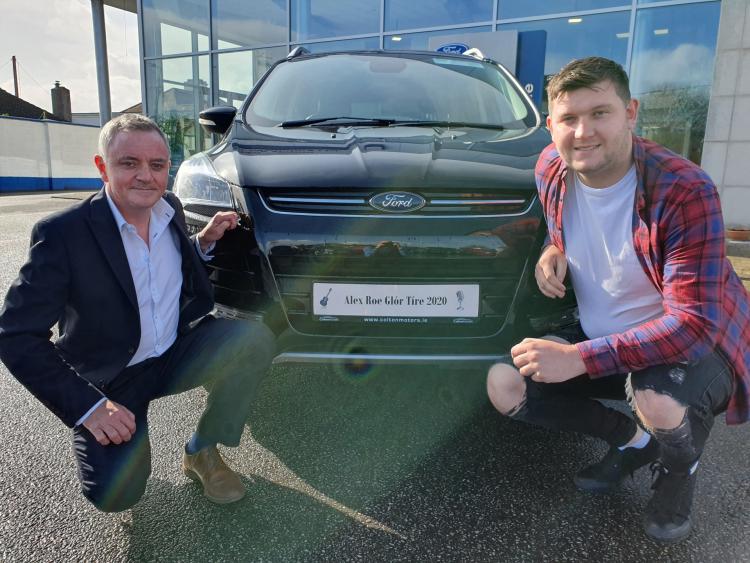 Young country music star Alex Roe sets out on what he hopes will be a road to Glor Tire glory this week, as the first episodes of the new TG4 series begin recording in its home, Galway venue The Quays.

Roe, from Clara in Offaly, has emerged as one of the most popular young entertainers on the Irish country music scene over the last couple of years, despite not turning 21 until before the turn of the year.

So it was hardly a surprise to many when country legend Trudi Lalor asked him to be her contestant on Glor Tire. All the contestants in this year's series will be recording on Monday, October 21, with Alex taking to the stage again on Thursday for what might well be the biggest night of his career so far, when he performs with Trudi herself.

With that big moment drawing closer by the day, the man himself confesses to being somewhat lost for words when he first heard the news that Trudi wanted to work with him on the show

"Oh yeah, and I'm not often speechless. I was definitely struggling to form any kind of sentences that made sense after I got that news. I think I was just blurting things out for a few hours, very randomly. The chance to be on the show itself, which I watch every year at home, that's just amazing. The chance to be on it with Trudi, that's dream come true stuff.

Roe's rising profile is evident in the fact that he's now a brand ambassador for Colton Motors in Tullamore, and will be setting out on his Glor Tire journey in a gorgeous Ford Kuga.

While the Hot Country Award winner has his travel plans all in order for a busy week, he hasn't forgotten about his fans and supporters and has been hard at work making the trip to Galway easier for them, too.

"Absolutely. We have buses running on both Monday and Thursday night, and the Monday bus is even full already. The Thursday night bus is heading that way, too, thank God. Anyone who's interested in buying a seat can contact me through my Facebook page or my Instagram and we'll give them all the details there."

Recording of the 2020 series of the TG4 show Glor Tire takes place in The Quays in Galway this week, with Alex Roe performing on Monday and Thursday. You can follow Alex on Facebook and Instagram for further info.